Although Shane Watson‘s Test career was not extraordinary, he fulfilled the role of a batting all-rounder for some years. His contribution to limited overs cricket was more striking, as he holds the record for Australia’s top score in ODIs (185*) and second highest in T20Is (124*).

Leaving out the Test against the ICC XI, he played 58 Tests, scoring 3697 runs and taking 75 wickets. If we compare his all-round performance in those of other Australians who had a minimum of 1000 runs and 50 wickets, it is above average but not outstanding (9th out of 22). The only other Australian of that time who might be called an all-rounder was Mitchell Johnson, who was a considerably better bowler but certainly a worse batsman. 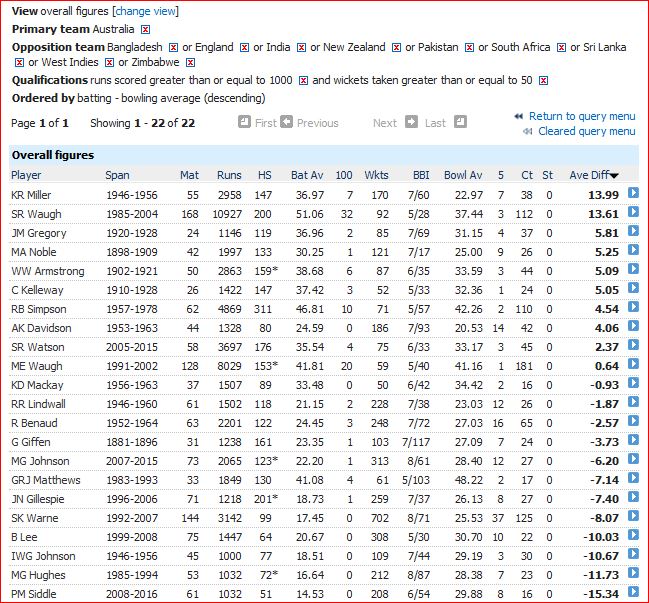 However, Watson does have one claim to fame in that he is one of only 4 players to feature on the “neutral” honours board at Lord’s. More about the honours boards here:

Only two neutral Tests have been played here. One was between Australia and South Africa as part of the experimental triangular Test series of 2012:

Australia easily defeated South Africa by 10 wickets. In general it was felt that the triangular Test series was a bad idea and it was not repeated. The nearest revival it got was the interlocking tours of England and West Indies to Australia in 1979-80.

Then there was the Test between Australia and Pakistan in 2010:

The neutral honours boards thus have these entries:

(There is also a board for ten wickets in a match, which does not have any entries yet).

The actual board being “unveiled” with the new entries:

This Test marked the Test debuts of Steve Smith (1, 12 and 3-51) and Azhar Ali (16 and 42). Watson got the first of his three fivers  while North got his only one here. This match marked Shahid Afridi’s only Test as captain; after this he retired from Tests altogether.

In the second neutral Test at Leeds, Salman Butt’s ill-fated captaincy began with a 3-wicket victory over Australia.

Watson recorded his career-best 6-33 in this Test, while the two As (Asif and Amir) combined to bowl Australia out for 88.