Now we take up ODIs in the same way. Though others interested in cricket statistics may disagree, I have removed ODIs involving multi-national teams such as the ICC World XI, Africa XI and Asia XI.

First, the highest scores at various batting positions in all ODIs:

Interesting that Kapil’s 175* in 1983 is the oldest record standing, followed by Viv Richard’s 189* in 1984. That was the only ODI played at Tunbridge Wells, and there is no video of this match available because of a dispute with the BBC at that time.

Interesting that the records for numbers 9 and 10 came in the same match.

Now we look at all debutants in ODIs: 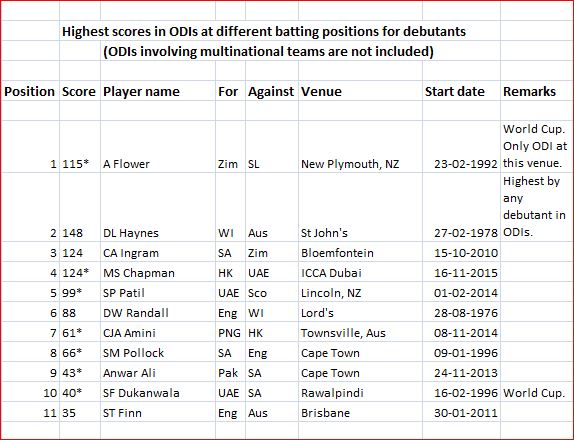 No debutant from India in the above table. Their details are here:

Some may be thinking of Yuvraj Singh’s 84 at No 5 in 2000. But that was in his second ODI, while he did not bat in the first. (Shahid Afridi’s 37-ball century had a similar story).