Here are some of the unusual statistical achievements of Steve O’Keefe . He and Lall Singh may be the only Test players born in Malaysia. He does not seem to be related to Kerry O’Keeffe  who played 24 Tests in the 1970s. Anyway their names are spelt differently.

This was Steve’s 5th Test, and his best innings analysis up to this Test was 3-53.

He now has the best match figures for Australia vs India: 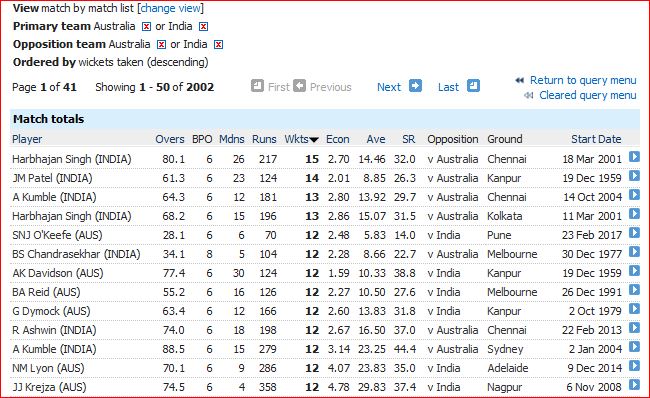 The previous best was Alan Davidson’s 12-124 in 1959-60; unfortunately for Australia that was also Jasu Patel’s match.

His innings bowling is, however, not very near the top performances in Aus-Ind matches:

The unfortunate JJ Krejza continues to hold the record of 8-215 which came on his debut. He only played one Test after that.

Finally, one curiosity is that his 6-35 in each innings is the best performance where the two innings are identical. The previous “record” was held by India’s BS Chandrashekhar with two 6-52s against Australia in 1977-78. This topic is covered in more depth here (in this post from 2016):