Our first stop is at Basin Bridge Jn (BBQ), where we have examples of ancient and modern signboards:

The food-minded may wish to hold a BBQ here, though you may have to first find a military hotel nearby.

Nearby there is Washermanpet, though the sign painters have some doubts about the name: 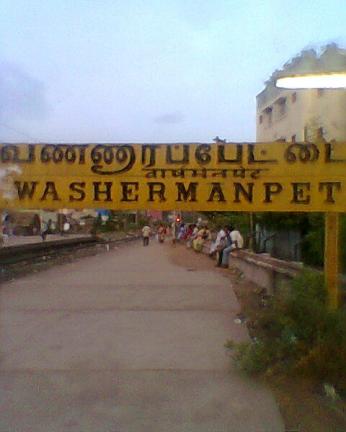 The official name is Washermanpet in the timetables. Also note the mis-spelling of the Hindi name. No picture of any new signboard seems to be available on the net.

Some years ago I have seen signs with Chromepet and Cromepet co-existing. Another well-known case is Hafizpet/Hafizpeta in the Hyderabad area.

An example of a run-down signboard in a totally run-down station:

Again, no picture of a new signboard is seen on the net. Tragic, as this station has the oldest surviving station building in India.  It was the first terminus in Madras where trains started running to Arcot (now Walajah Road) in 1856. The old terminuses in Mumbai and Kolkata had opened before this but the station buildings do not exist now. However, it now boasts a new electric loco shed.

Another station which is particularly obscure, as it does not seem to be mentioned in timetables even though it has a booking office which issues tickets. No picture of any new signboard can be located.

One thought on “Travels in Chennai-ancient signboards”