Skip to content
HomeBest performance in the first 4 Tests

Before the Afghanistan-WI Test got under way, there was some speculation about Afghanistan winning and thus winning 3 of their first 4 Tests. No other team had done this.

This did not happen, but is interesting to see how all Test teams performed in their first 4 Tests. Afghanistan did have a creditable start with LWWL (two wins), which matches the record of Australia and England.

Ireland is not listed here as they have only played 3 Tests.

So the approximate ranking is: 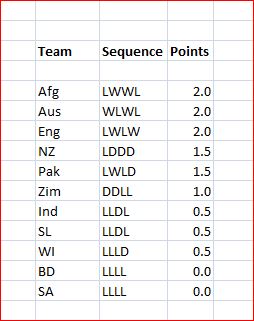 Note that Afghanistan, Australia and England had the best start while Bangladesh and South Africa had the worst.

Australia and Zimbabwe are the only teams which did NOT lose their first Test.

Zimbabwe is the only team which did NOT see defeat in their first 2 Tests.

India and Sri Lanka have identical sequences, as do Bangladesh and South Africa.