The overall results at the end of this series:

As Australia won all 3 Tests, they gained 120 points for the World Test Championship. The points table as of 06 Jan 2020:

Australia won their second clean sweep in a 3-Test series against New Zealand. They had earlier done this in New Zealand in 1999-2000.

While New Zealand has lost most of their series against Australia, they did win both at home and away in 1985-86 thanks mainly to RJ Hadlee.

Now for individual performances in Batting:

Warner, Taylor and Smith are the current players here.

The most centuries are 5 by Border and Warner.

None of these high scores are from this series, although there are some from 2015 and 2016. Taylor and Warner made the top scores for these teams in the same Test in 2015.

Taylor and Southee represent the current players. Warner has not played enough in this series. JL Langer has a large lead over the next-placed Greg Chappell. 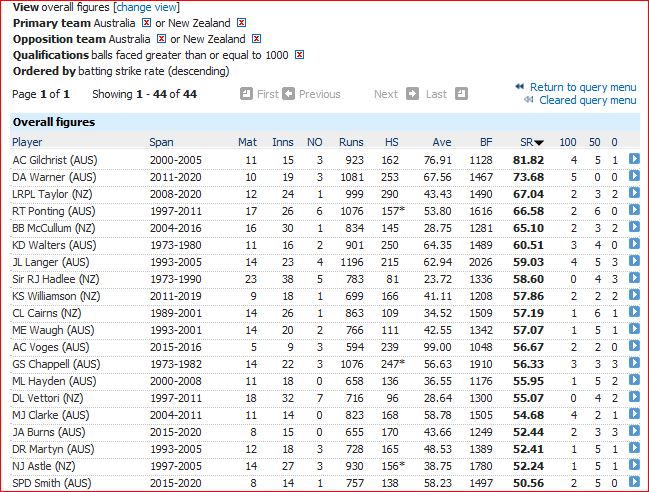 Gilchrist leads by a large margin over Warner and Taylor.