The 3rd Test of the South Africa-England series ended in an innings victory for England. They lead 2-1 with one to go. A number of statistical landmarks occurred in this match.

First, you can see the scorecard:

Newcomer Oliver Pope was Player of the Match. He became one of the few to score a century and take 6 or more catches as a non-keeper:

You can see that Hayden’s and Kallis’s performances were the best here.

Also see what Ben Stokes did in the previous Test (100 runs/3 wickets/6 catches):

Joe Root had never taken more than 2 wickets in an innings until this Test. He did improve upon this, but suffered the indignity of conceding the most runs in an over. He got a share in this  negative record:

Dane Paterson scored 39* at No 11 on debut, which is the fourth highest such score: 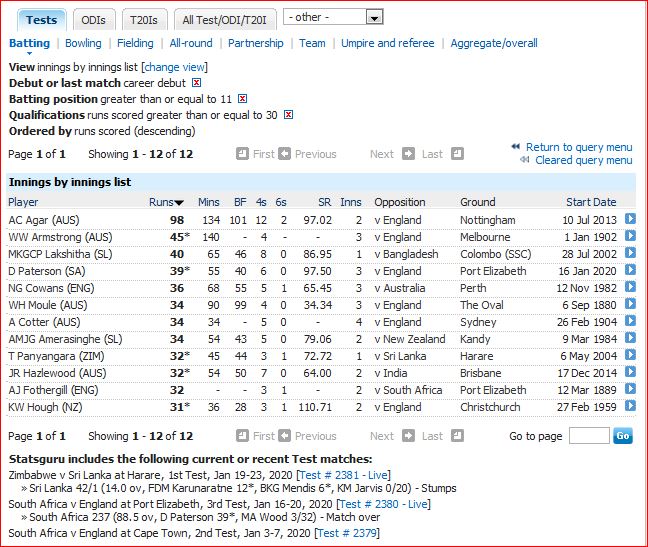 The previous highest by a South African No 11 on debut was 22* by PW Sherwell back in January 1906. Unlike in this Test, this score helped SA to win by one wicket. Sherwell was captaining AND keeping on his debut.

This last-wicket partnership of 99 is the second highest for SA vs Eng: