As we have seen in

there are many pairs of railway stations in India which are situated far apart but have similar (if not identical) names. In general, there are no convenient connections between these pairs, such as Udaipur City (Rajasthan) and Udaipur (Tripura) or Chandrapur (Maharashtra) and Chandrapura (Jharkhand).

Except for one pair:

and its better-known namesake 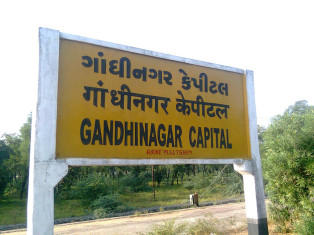 The one above has now developed into an important secondary station for trains heading on the routes from Jaipur to Delhi and beyond as well as to Agra and beyond. Thus we have the Ajmer/Delhi and Jaipur/Agra Shatabdis halting there, as well as several other prominent long-distance trains.

While Gandhinagar is the capital of Gujarat, it has relatively poorer train service as it is not on a main line, but on a loop between Ahmedabad and Kalol which is used by a handful of long-distance trains as well as locals connecting it with Ahmedabad. Ahmedabad itself has secondary stations such as Sabarmati and Maninagar.

The relative importance of the two Gandhinagars can be seen from the lists of trains serving them:

Recently I did have reason to make a round trip between the two Gandhinagars, in connection with work at IIT Gandhinagar, which many feel is the best of the “newer” IITs.

There is, in fact, precisely one daily train which connects the two stations, as you can see below:

That is the 19031/19032 Yoga Express, which was the Ahmedabad/Haridwar Mail until 2013 and the 1/2 Delhi/Ahmedabad Mail still earlier. Until the 1970s it was considered to be the most prestigious train between Delhi and Ahmedabad, but this mantle then passed to the Ashhram Express (for the regular traveller) and the Rajdhani (for the premium traveller). Somehow the Mail never got superfast status.

There is also the Garib Rath which runs 4 times a week between Bandra Terminus and Delhi Sarai Rohilla. But taking that would be “cheating” because it does not stop at Gandhinagar Jaipur but only at Jaipur Junction.

So if you have to start from the southern half of Jaipur, Gandhinagar Jaipur is preferable.

For the hard-core timetable fan, here are the details for the up and down journeys between the two Gandhinagars:

Although the Yoga Express is supposed to be a train with reasonable prestige (as it has AC-1 accommodation), it does not have a pantry car and passengers make do with informal arrangements. For instance, the northbound train had provision for meals to be delivered at Beawar, although this did not seem to be part of the e-catering system which IRCTC tries to push.