Continuing with our study of individual performances. Now for bowling. 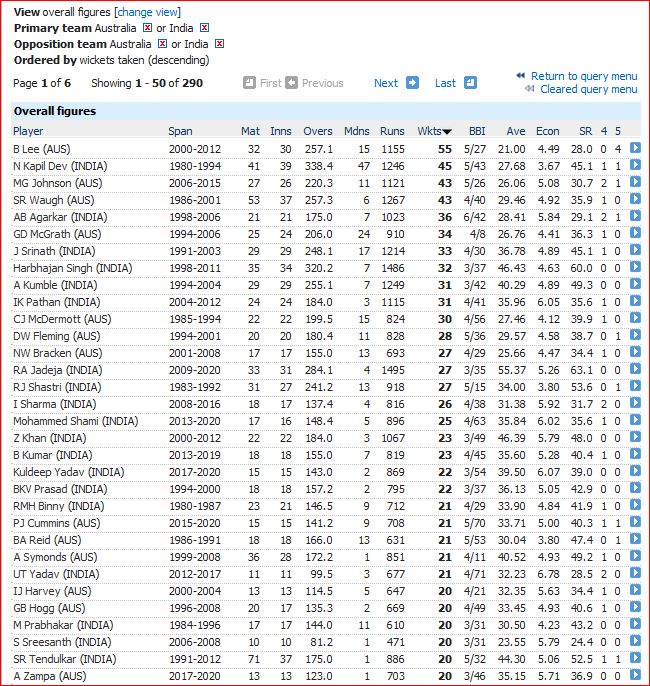 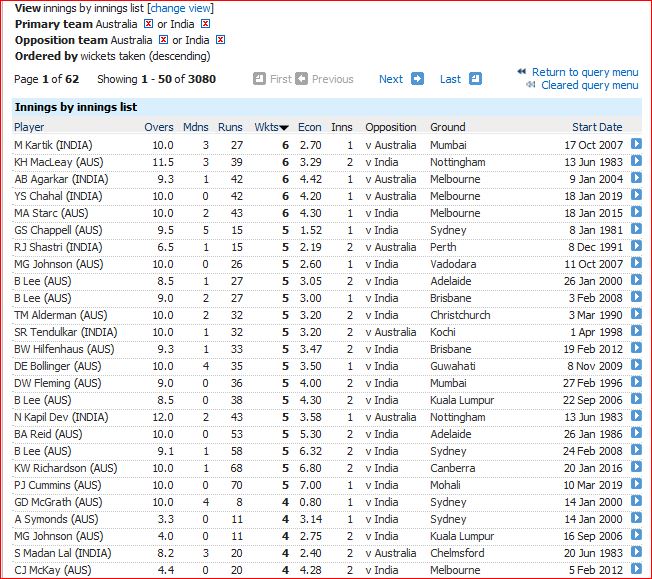 The first two places are occupied by now-forgotten players. There is nothing from this series, although YS Chahal took 6-42 early in 2019. Cummins also had a fiver in 2019.

Brett Lee has a much better average than the second-placed Johnson. However Jadeja at 17th place has the best average among current players.

Kapil and McDermott have the best economy rates, and Lee and Agarkar (!) the best strike rates.

Gilchrist and Dhoni are far ahead of the others, including Tendulkar who has the most catches by a non-keeper. Dhoni has the most stumpings. Kohli and Maxwell are the only current players here.

Most innings dismissals (4 or more):

Gilchrist and Dhoni again. Clarke is the only non-keeper with 4 catches.

Gilchrist and Dhoni, with Maxwell having the best average for a non-keeper.

The first two (or three) would not generally be considered leading all-rounders, although they have done well in these contests.

The best performance here would be by Tendulkar, followed by Kapil and Watson (5 Nov 2009).

Here are the results of ODIs between these teams since January 2019:

On the whole India has done better in the past year.

We also look at the results of all ODIs between these teams: 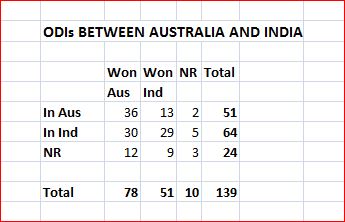 We now look at the individual performances in batting:

RG Sharma and Kohli continue to move up though they have some distance to go to reach Tendulkar’s record. Finch and Dhawan are among the other current players here.

Tendulkar has the most centuries (9) followed by Kohli and Sharma with 8.

Tendulkar also has the most scores of 50-plus (24) and is predictably followed by Kohli and Sharma with 16.

Note that RG Sharma has the highest overall score in this series (209) as well as India’s highest in Australia (171*).

Sharma and Kohli are the top two. Dhawan and Finch are among the other current players here. Smith and Warner have not played enough to qualify.

Now you can see why Australian fans want Maxwell back in the team.

Dhawan and SPD Smith have the best strike rates among those who played in 2020.