Australia lost two of its Test stalwarts on successive days; Ashley Mallett on Oct 29 and Alan Davidson on the 30th.

While Mallett was somewhat overshadowed by the Australian fast bowlers of his time, he often played an useful role as the sole spinner.

He did well bowling against India, as you can see here:

His bowling average against India was his best against all Test countries. He only played one series against India, in 1969-70. He took 28 wickets including his only 10-for in the last Test at Madras, which gave Australia a 3-1 win. Indian fans of that period remember it more for Viswanath’s debut and numerous crowd disturbances.

Davidson is better-known for being the first to score over a 100 runs and take a 10-for in the same Test. This was at the Tied Test at Brisbane:

In later years this was overshadowed by the feats of Botham, Imran and Shakib who scored centuries along with 10-fors. No one else has emulated Davidson.

He did not do too well as a batsman against India: https://stats.espncricinfo.com/ci/engine/player/4902.html?class=1;template=results;type=batting

But did somewhat better as a bowler:

His bowling average against India was his best against all Test countries. His best innings figures (7-93) and match figures (12-124) were also against India.

This was at Kanpur in 1959-60, which marked India’s first win against Australia:

20 years passed. 7 Tests were played at Kanpur and all were drawn (including the one against Australia in 1969-70).

The only difference was that the bowler was Dymock instead of Davidson:

Like Davidson, Dymock took 5 wickets in the first innings and 7 in the second.

Unlike in 1959 when Jasu Patel took 14 wickets, here the spoils were shared by Kapil, Ghavri and Shivlal Yadav.

But these two Tests at Kanpur had a remarkable number of similarities, more than those of the two Australia-England Tests of 1877 and 1977.

Australia won the recent 3-Test series 2-0 with one draw, with the drawn match being badly affected by rain. After this series, a total of 116 Tests have been played between these countries. Australia leads 58-32 with one tie and 25 draws.

A look at various statistical records at the end of the series:

Nobody from the present sides, the most recent entries being that of Ponting and Chanderpaul.

Here newcomer AC Voges made the highest score for Aus v WI, surpassing the 242 by KD Walters in 1968-69. That was an important landmark as Walters became the first to score a century and double century in the same Test, a feat which was soon repeated by SM Gavaskar and others.

Now to highest averages (for a minimum of 20 innings batted):

The top two names might be a little surprising, as well as the relatively low positions of Richards, Sobers and Greenidge who were prolific scorers against most teams.

The most centuries are 9 by BC Lara and RB Richardson, followed by 7 by RT Ponting and SR Waugh. 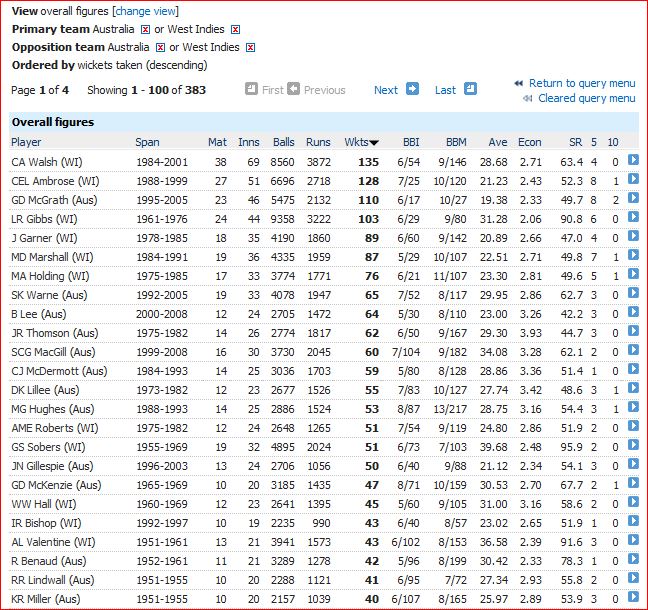 The most 5-fors were 8 by Ambrose and McGrath, while McGrath was the only one to take two ten-fors. It can be seen that McGrath is the most recent entrant in this table.

Now we look at bowling averages (for a minimum of 2000 balls bowled):

This is on expected lines.

The most stumpings were 9 by the now-forgotten GRA Langley. The most catches by non-keepers were 45 by ME Waugh and 38 by CL Hooper.

The most dismissals in an innings was 7 by RD Jacobs, and in a match it was 9 by DA Murray and RD Jacobs.

Highest dismissal rate (for a minimum of 20 innings fielded): 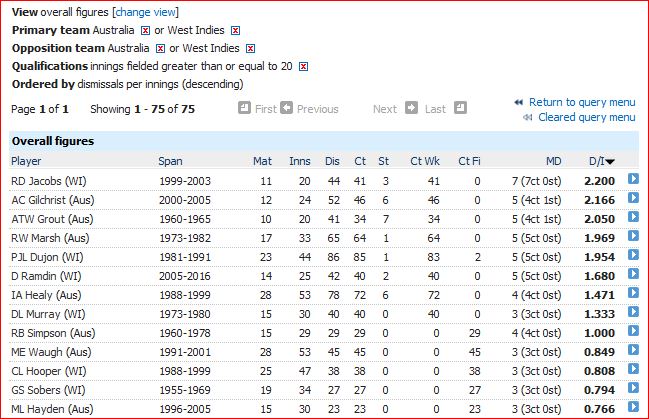 Note that RB Simpson has the highest rate among non-keepers.

As usual, we have to use some semi-arbitrary criteria to identify all-rounders here. However, this has got most of those who are generally considered to be better all-rounders (though one may say that AR Border’s second place is surprising).

And finally, best all-round performances in a match:

DS Atkinson and Mushtaq Mohammed are the only ones (in all Tests) who have scored a double century and taken a five-for in the same match.

Gary Sobers was the first to score a maiden Test century which was a triple. Only two other batsmen (KK Nair being the latest addition) have done this. Although the circumstances here were not so dramatic, Bob Simpson’s Test career was more conventional but there was a twist in the end.

Robert Baddeley Simpson (generally known as Bob Simpson) was, unlike Sobers, a specialist batsman from the start. A right-hand batsman and occasional leg-spinner, he made his debut against South Africa in 1957-58 with 60 and 23* at No 6 and no bowling in a draw:

He did well enough to keep getting selected and tended towards opening the batting. He also had occasional useful spells as a change bowler. In due course he captained Australia, starting with the 2nd Test against South Africa in 1963-64. Everything went well except for the lack of centuries.

Our story begins in earnest at the 4th Ashes Test at Manchester in 1964. Simpson was now opening and had  a good opening partner in Bill Lawry. Australia led the series 1-0 and only had to avoid defeat here to be sure of retaining the Ashes. Until the previous Test, these were Simpson’s figures:

No less than 14 fifties with a top score of 92 (twice). He had not done particularly well in the first three Tests of the series, and had not even claimed the occasional wicket.

Thus dawned Simpson’s 30th Test at Old Trafford, Manchester on 23 Jul 1964. This was not considered to be a batsman’s wicket and perhaps the wounds of Laker’s 19-90 in 1956 were still raw. On this occasion England’s bowling lineup was not particularly good, including the soon-to-be forgotten Fred Rumsey opening with an equally undistinguished John Price (who played long enough to trouble Gavaskar in 1971). The only bowler who stood the test of time was Fred Titmus, while part-timers like Dexter and Boycott also bowled in this match.

Unlike in Sobers’s record-breaking innings which we saw earlier, nothing obviously went wrong with England’s bowling. It simply wasn’t good enough. At the end of the second day (24 Jul) Australia was 570/4 with Simpson crossing the second hurdle with 265* and Booth on 82 not out.

After the rest day, the rest of the match was somewhat of an anticlimax with England grinding out 611 (Dexter 174, Barrington 256) after finishing the 4th day with 411/3 (Barrington 153*, Parfitt 12*). McKenzie did take 7 wickets but did not seem to have much support. Veivers with 3 wickets was the only other successful bowler.

The innings dragged on for so long that Australia only batted two overs for 4/0 in the closing stages. But they led 1-0 with one to go, and the Ashes remained Down Under. Here is the scorecard:

Simpson then broke out of his century drought, though unlike Sobers he did not cross 50 in the next Test. His final tally was 4869 runs with 10 centuries including the triple and two doubles. There were also 71 wickets with two fivers as well as 110 catches. He was set to retire after India’s visit in 1967-68 which predictably ended in a 4-0 sweep. But that was not the end of his career. He got a surprise Test recall almost 10 years later during the Packer crisis. Let Wikipedia take up the story here:

“When Test cricket was decimated by the breakaway World Series Cricket in 1977, Simpson made a comeback after a decade in retirement to captain New South Wales and Australia at the age of 41. All of Australia’s first-choice players had defected apart from Jeff Thomson. Simpson had been playing for Western Suburbs in Sydney Grade Cricket but had not been playing at first-class level for a decade. His first assignment was a five Test series against India, and Simpson began where he left off a decade earlier. He top-scored with 89 in the second innings of the First Test in Brisbane, before scoring 176 and 39 as Australia won in Perth. Simpson failed to pass double figures in the Third Test in Melbourne, and made 30s in both innings in Sydney, as the Indians won two consecutive Tests to level the series. Simpson responded with 100 and 51 in the deciding Fifth Test in Adelaide as Australia scraped to a 3–2 series victory. Simpson totaled 539 runs at 53.90 and took four wickets.

He then led Australia on a tour of the West Indies, then the strongest team in the world. He made only one half century, 67 in the Third Test in Georgetown, Guyana. It was the only Test that Australia won in a 3–1 series loss. He had a disappointing series scoring 199 runs at 22.11 and taking seven wickets at 52.28. Simpson wanted to continue playing Tests as Australia hosted Mike Brearley’s Englishmen in 1978–79. His players wanted him to continue, but the Australian Cricket Board voted him out and installed Graham Yallop as the skipper. During his comeback, he had accumulated his 60th first-class century against Barbados during the Caribbean tour and become the oldest Australian to score a Test century on home soil.”

It would be fair to say that he played a major role in India’s 3-2 loss though he was out of his depth against the West Indies, even though the last 3 Tests were played against a weak de-Packerized squad.

Thus end the stories of Gary Sobers and Bob Simpson, the first two Test players whose maiden centuries were triples. The third member of this exclusive club was KK Nair in 2016.

A weird coincidence: Although they were quite different types of players who peaked at different times, they were both born in 1936: Sobers on  Jul 28 and Simpson on Feb 3.