At close on the Oct 10, 2019, which was the first day of the second India-SA Test at Pune, South Africa was yet to bat.

So Senuran Muthusamy temporarily holds the record of the most runs in a Test career without ever being dismissed:

Azhar Mahmood scored 128* and 50* on debut and thus scored 178 without being dismissed. He added another 19 in his third innings before he was dismissed for the first time.

JA Rudolph scored 222* on debut, and 71 in his next innings in his second Test.

The above table shows those with short careers who finished with no dismissal. SG Law scored 54* in his only innings, while his fellow debutant Ricky Ponting (96) went on to better things.

There are a few there who played in 3 Tests. However, the real achievement was that of Aijaz Cheema:

We now move on to the related topic of the highest batting averages. Most statistics sources such as Cricinfo give this with a cutoff of 20 innings, as in this:

But what if we do not have  a minimum number of innings? After Muthusamy and his unbeaten friends, we get:

Highest batting averages (with no minimum number of innings):

This is headed by current players KR Patterson and PP Shaw who are expected to play Tests in the future. Next is AG Ganteaume with his average permanently stuck at 112.00. Only then we have Bradman’s 99.94, followed by a couple of 1-Test players in the 90s.  Further down we have SPD Smith (64.56) and AC Voges (61.87).

The fourth day was dominated by the second century by Rohit Sharma, where he achieved something which no other opener had done in Tests so far, by making twin centuries in the first Test where he had opened. That was something which CG Greenidge and AJ Strauss narrowly missed, and was not achieved by a galaxy of renowned openers from Hobbs and Sutcliffe to Gavaskar and Graeme Smith.

The final day appeared to be ready for a quick finish when 7 wickets fell rapidly before lunch. The batsmen finally put up some fight to take the score from 70/8 to 161/9 to 191-one of the relatively few innings where the score was doubled after the 8th wicket fell.

While India won by 203 runs, there were a number of statistical highlights by the South African batsmen:

Highest score by No 8-11 batsman against India in the 4th innings:

Highest totals without a dismissal on debut:

His 82 is in the middle of this table. AG Kripal Singh and RG Nadkarni are also here.

Highest totals with two not out innings on debut:

He is in 5th position here. Azhar Mahmood is the only one with an unbeaten century AND fifty on debut, and GC Grant the only other one with two unbeaten fifties on debut. Muthusamy’s 82 is the highest such total against India, ahead of CM Old’s 50 in 1972. AE Trott also took 8-43 on his debut

Highest totals on debut without a fifty:

Muthusamy is in 6th place here, though the topper LK Germon (89) and AJ Pycroft (85) scored more against India. The best by India is 74 by M Vijay followed by 73 by Akash Chopra.

Highest total in all Tests without a fifty: 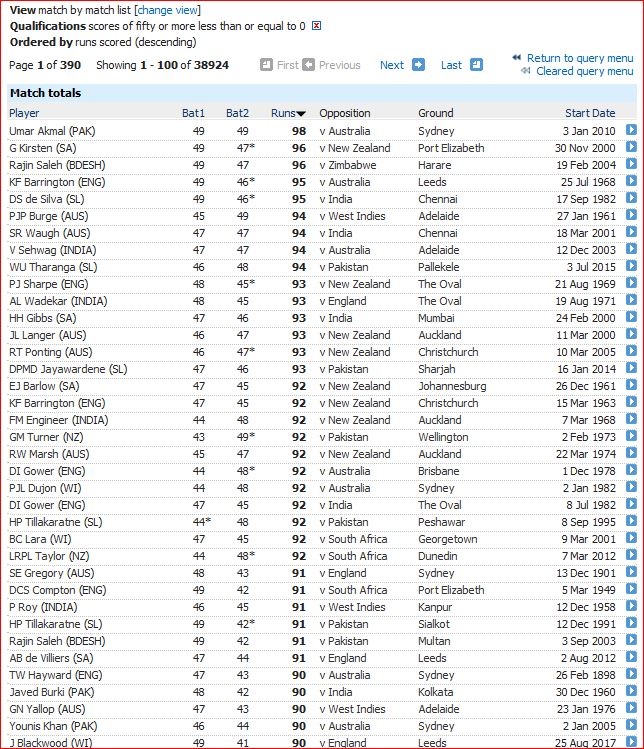 This was, predictably, headed by someone with two 49s. No debutant reached 90 without a fifty, the record being 89 by Germon listed above.  G Kirsten of SA is second here.

Finally we look at the highest scores by No 10 against India:

Piedt is 4th on this list and the highest in the 4th innings. His 56 is higher than Verity’s 55* in the first innings.

Centuries on debut are well documented. Here we look at those who made two fifties (between 50 and 99) on debut, and then those who scored two scores of 50+ on debut.

Fakhar Zaman with 160 runs is in joint second place here with Clive Lloyd while the list is headed by the lesser-known Bruce Laird.

Gavaskar and Dilawar represent India, while there are current and near-current players such as Tamim Iqbal, Chandimal, Henriques and Pietersen.

GC Grant is the only one with two unbeaten fifties on debut.

There are, of course, numerous cases of one fifty and one hundred on debut, and even two cases of two hundreds on debut (LG Rowe and Yasir Hameed).

Here are the complete list of those who scored two scores of 50+ on debut. 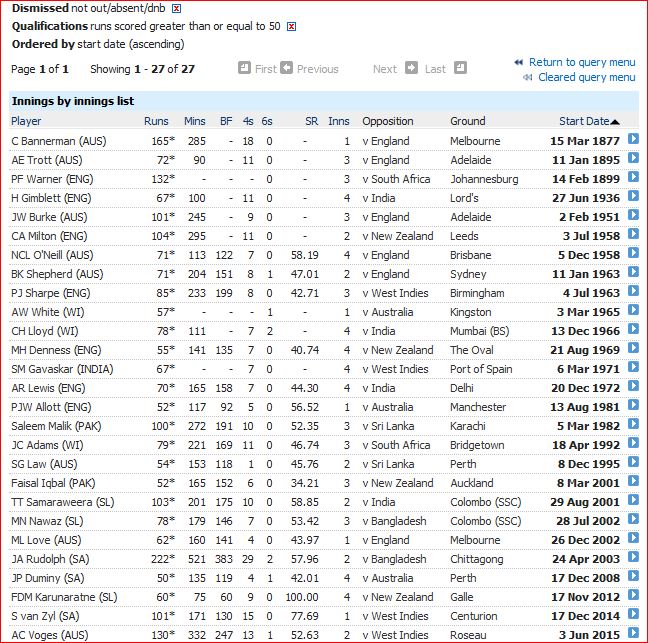 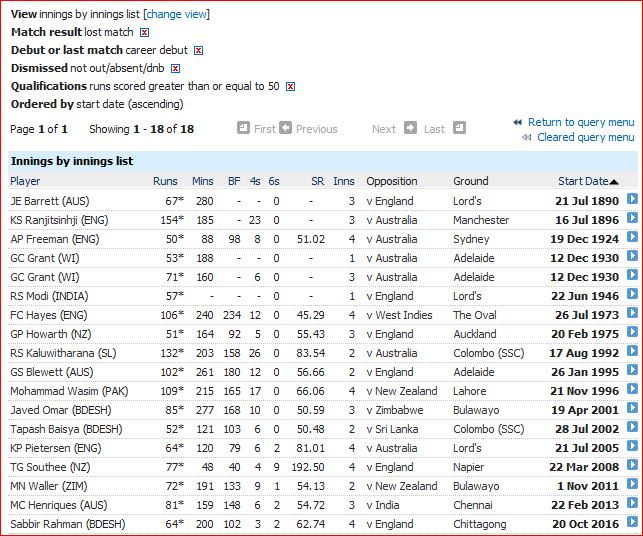