The All-India Railway Timetable was the “Bible” of a section of railfans until 1977 when it was replaced by “Trains at a Glance”. The Indian Bradshaw started sometime in the 19th century and appears to have vanished a few years ago. And then there were the timetables of the individual zones. Unlike the All India RT and Bradshaw, they carried the zonal maps as well. They survive today as a sort of hybrid, an example being the Western Zonal Timetable which includes the Central, Western, West Central and North Western Railways.

Today, however, we look at some extracts from the maps attached to the Southern and South Central Railway timetables issued in November 1975. It is instructive to compare them with the maps of the present railway systems in those areas.

Notes: Many more stations have come up on these suburban sections since 1975.

See the MG lines extending up to the Tondiarpet yard. It was a bit startling to observe a YG next to the BG tracks while travelling north from MAS in the late 80s.

Madras has long become Chennai, while Madras Park and Madras Chetpat have since been contracted  to Park and Chetpat. (However they are listed as Chennai Park and Chennai Chetpat in the RBS tables). Not the first time that official names in the Railway’s own databases are not the same as the names on the signboards.

The Villivakkam- Anna Nagar branch came and went in the 2000s.

This map shows Veysarpadi which was and still is a cabin and not a station. Vyasarpadi Jeeva station came later.

And the mapmaker forgot the existence of Madras Beach station, where once MG lines met an outlying BG line.

The Hindi signboards in this area are curious in that they use Hindi transliterations of Tamil words rather than Hindi words. Today we have:

Also, Egmore is revealed to be the Anglicized form of Eshambur. 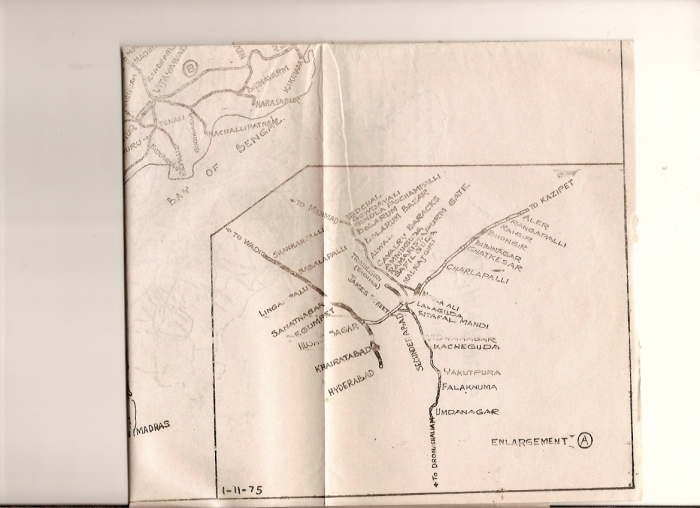 Notes: Husain Sagar Jn was a functioning station at that time, while James Street station vanished soon afterwards and was revived with the MMTS in the 2000s. Many new stations appeared when the MMTS started. Today Husain Sagar has a large signal cabin while the platforms of the long-vanished station can still be seen.

The short-lived Telapur-Patancheru branch appeared some years later and has now vanished. If you keep your eyes open you may see the abandoned station of Telapur west of Lingampalli, from where the branch departed to the north. There is some talk of reviving this branch as part of the MMTS.

Note the forgotten siding to Trimulgeri, which was more commonly spelt as Trimulgherry.

An intensive suburban system with YDM2 diesels served the MG suburban sections running north and south of Secunderabad. Now, of course, you will not see any MG line within a few hundred km of the Hyderabad area.

Here is a fairly simple one for those who are familiar with timetables of the 1970s:

What was common between these four stations as of the mid-70s (but not today): 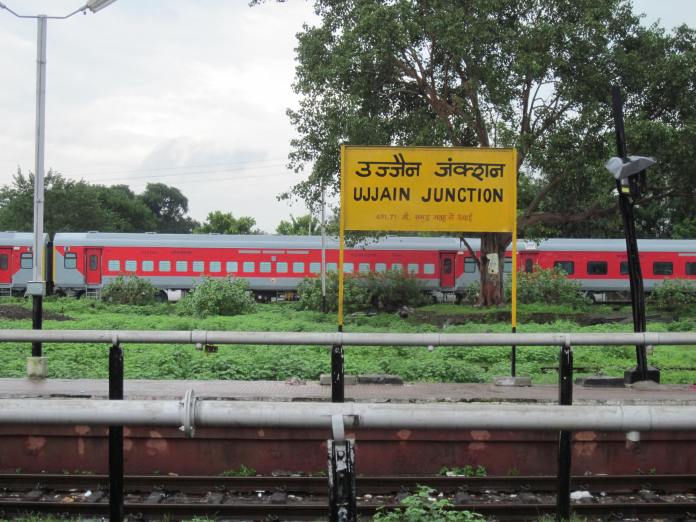 Answer: These stations had three gauges of lines.

The first to get it right was Abhirup Sarkar.

Remember, all this applies to the 1970s and not now.

BG, MG and NG are mentioned in order for each case.

Bangalore City: Main line from Madras, various lines to Mysore, Hubli etc, 2’6″ line  to Bangarapet via Yelahanka, Chikballapur and Kolar. The NG terminus moved to Yelahanka in the 80s. Now that line is also BG. Possibly Yelahanka had all 3 gauges for some time.

Miraj: Main line from Bombay and Poona, main line from Bangalore, branch line to Kurduwadi. (Up to around 1970 it was on the MG line from Poona to Bangalore. BG conversion got up to Miraj and Kolhapur and then stopped for many years).

Ujjain: Major branch line from Bhopal to Nagda and Indore, minor branch line from Indore via Fatehabad Chandrawatiganj, 2’0″ branch to Agar which probably closed in the 80s. This was originally part of the Scindia State Railway which also ran three similar branches out of Gwalior, one of which still runs on NG.

First we take a look at different signs at SBC station, in its various avatars as Bangalore City, Bengaluru City and finally Krantivira Sangolli Rayanna (Bengaluru Station). Also don’t ask why the S got into SBC.

But the average Bangalorean might prefer to stick to calling it Majestic, like the way Hyderabadis stick to Nampalli, Amdavadis to Kalupur and Banarsis to Cantt (well, it was officially known as Benares Cantt until the 1940s).

At the other end of the line 138 km away we have Mysore (now Mysuru):

But the line between these cities has seen more than its share of renaming. Let us first look at an Indian Bradshaw entry from 1935:

The reproduction is not too good, and the mileage is not visible in this scan. Odd things you can see here are Maddur listed as a junction (though no branch line from there is listed in this Bradshaw or anywhere else). And several place names do not appear in present timetables.

Here is an extract from an official website showing the timings of a passenger train between Bengaluru and Mysuru:

Even this train does not stop at a few stations such as Krishnadevaraya Halt (5 km from SBC), Palahalli Halt (between S and NHY) and Mysuru New Goods Terminal (4 km before MYS) which is a pure goods station.

(Palahalli is apparently not on the present alignment but is still mentioned in railway documents).

Apart from the changes to the names of SBC and MYS, we also note:

Seringapatnam is now Srirangapattana (changing the simplified spelling of the British).

Other points of interest: the 1935 timetable shows 13 intermediate stations. The present slow passenger train stops at 19, while at least 3 more are known to exist.

Of course, there has been progress on this line. It was converted to broad gauge by the mid-90s and electrification continues at a snail’s pace-apparently it is complete up to Mandya. There is now a Shatabdi from Chennai along with numerous trains to different corners of the country. Even the former single track MG line is almost completely doubled apart from a short stretch outside Shrirangapattana where Tippu’s armoury building is being bodily shifted to make way for the new line, as you can see here:

Thanks to Raghavendra Rao and Sandeep Mohan for useful updates.