A total of 44 players made their Test debut during the calendar year 2016. Here we take a look at their performances in their debut matches and briefly look at their progress until February 2017.

Innings scores of 40 and above:

and match totals of 50 and above: 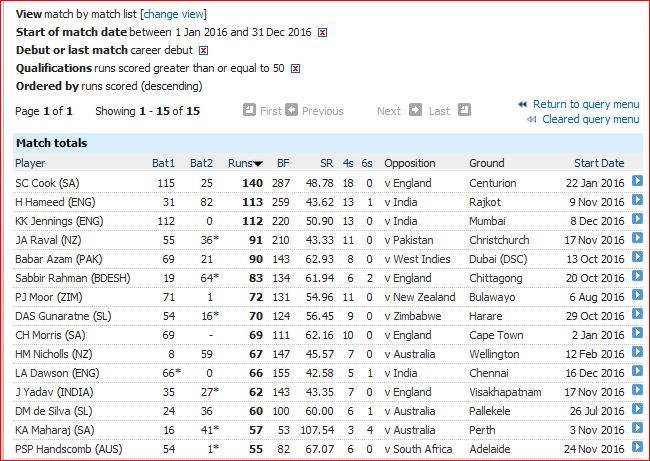 12 instances of 50+ on debut, including centuries by SC Cook and KK Jennings. 3 others (J Yadav, Dhananjaya de Silva and KS Maharaj) also scored at least 50 runs in the match. H Hameed scored over 100 in his debut match without a century. Jennings became one of only 4 to score a century and duck on debut; GR Viswanath was the first to do so.

Cook has so far made 3 centuries and Dhananjaya  and Handscomb 2 apiece, while others including Gunaratne and Yadav have also scored centuries. Most of those listed above have made steady progress as batsmen (and in some cases as bowlers).

Looking at bowling performances on debut;

4 wickets in an innings:

6 wickets in a match:

The best innings and match performances were by Zimbabwe-born C de Grandhomme. MH Miraz did almost as well, conceding a few more runs. Miraz went on to take two 6-fors in his second Test and was instrumental in Bangladesh’s first Test victory over England. He has also displayed some batting ability in his last few Tests, as has de Grandhomme.