Afghanistan defeated West Indies in the final. These two teams qualified to participate in the World Cup in 2019. Here is a summary of the table (though it does not include the final):

Individual performances are given below. Matches involving Netherlands and Nepal did not have ODI status at the time of the tournament, and are thus excluded from Statsguru’s database and are not included in the tables below.

However, from now onwards Netherlands, Nepal, Scotland and UAE have ODI status while Hong Kong and PNG do not. A further reshuffle will be done in a process which will end about 4 years from now.

No one scored more than one century, while Rahmat Shah was the only one with three 50+ scores. Note that BRM Taylor scored the most runs, far ahead of CS MacLeod.

Highest innings in ODIs (90 and above): 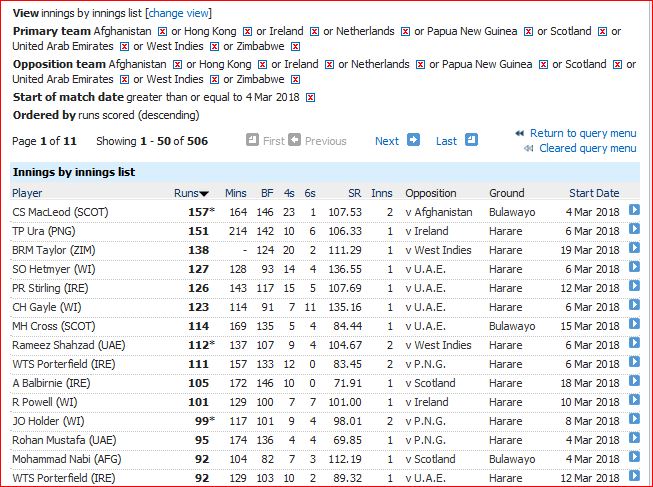 Note that the two highest scores were by relatively lesser known players.

Most wickets in ODIs (8 and above):

No one took 5wi more than once. 3 players took two 4wis apiece.

Best innings bowling in ODIs (4wi and above):

Most dismissals in ODIs (6 and above):

NJ O’Brien was by far the leading keeper. The best by a non-keeper was 8 by N Zadran.

Most dismissals in an innings in ODIs (3 and above):

While NJ O’Brien and McKechnie took 4 dismissals as keepers, 4 non-keepers took 3 catches each.

Holder, followed by Mustafa were clearly the leading all-rounders of the series.

A number of good performances.

And finally, the ICC ranking tables after the final got over on 25th March:

It can be seen that in the long run Zimbabwe and Ireland did not do well enough to claim themselves in the top ten. 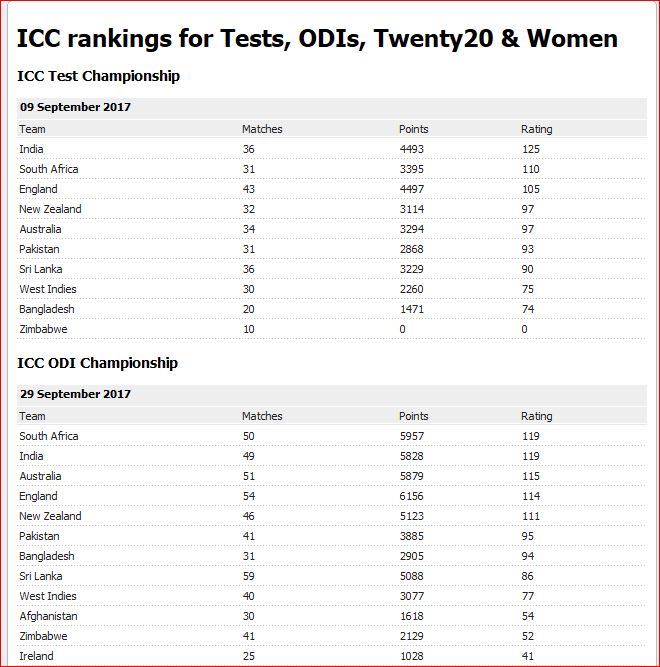 The first 8 (including the host) qualified while the bottom 4 (WI, Afg, Zim, Ire) would account for 4 places in the qualifying rounds in 2018.

They would be joined by the 4 top teams in the WCL championship. which got over in Dec 2017. These are the results:https://en.wikipedia.org/wiki/2015%E2%80%9317_ICC_World_Cricket_League_Championship#Points_table

The remaining 2 spots will be selected from the bottom 4 in the WCL and the top 2 from WCL division 3: (Kenya, UAE, Nepal, Namibia) + (Canada, Oman).

There could be some upsets here, but probably Kenya and UAE will get through here. (Update: It was Nepal and UAE who emerged from this).

Details of this mini-qualifier (to be held in Feb 8-15 in Namibia) are here:

So we now have:WI, Afg, Zim, Ire, Neth, Sco, HK, PNG, Nep and UAE in the “main” qualifier to be held in Zimbabwe from March 4 to 25. These have been divided into two pools of 5. There will be Super Sixes but no semi-finals.

While there may be an occasional upset, it is very unlikely that the 2 qualifiers will be from the WCL teams. West Indies should have no trouble in qualifying, while there may be an interesting struggle for the other qualifying spot between Zimbabwe and Afghanistan. Zimbabwe may have a slight home advantage. Ireland has generally declined in ODIs over the past year and may not challenge the other three seriously.

Final update: It was West Indies and Afghanistan who qualified for the 2019 World Cup.