This was the first bilateral T20I series between the teams, and was won 2-1 by India. The first match is the only T20I  which Bangladesh has won since matches between these teams started in 2009.

Here is the summary of all 11 matches between these teams, where India lead 10-1:

RG Sharma is far ahead of the others wth 452 runs and 5 fifties. He, Mushfiqur and Mahmudullah have played for all 11 matches between these teams. Dhawan played in 10.

Highest individual scores (50 and above): 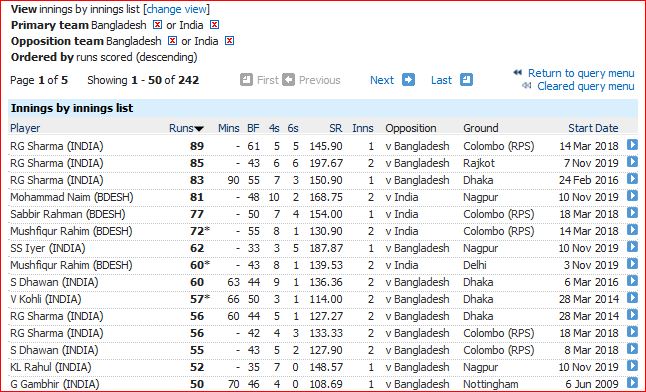 The 3 highest scores are all by RG Sharma, followed by the only other 80+ which was by Mohammad Naim in the last match.

DL Chahar has by far the best figures here. This was in the final T20I, and included a hat-trick spread over two overs.

This is the best innings bowling in all T20Is: 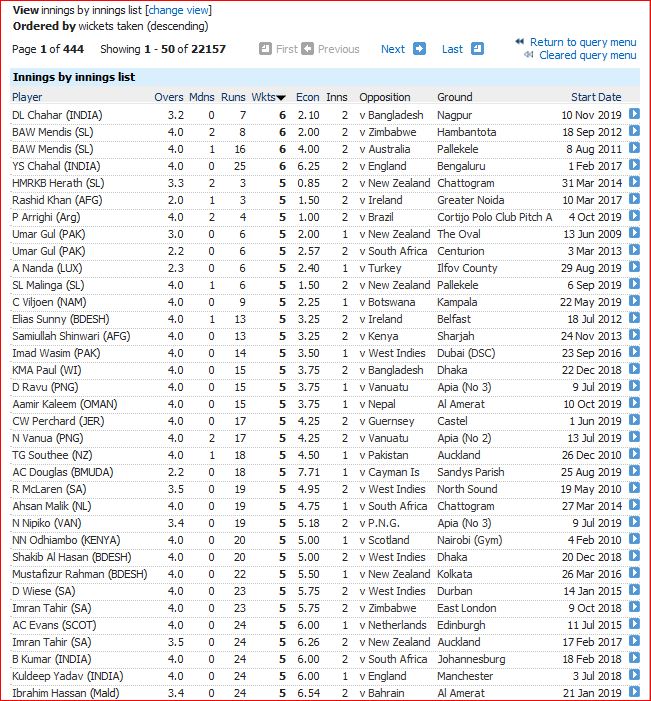 This includes all 6wis and most 5wis. Chahar overtook the old record of 6-8 by BAW Mendis set during the 2012 T20I World Championship (not World Cup). The previous record for India was 6-25 by YS Chahal against England in 2017.

Fielding: Most dismissals (3 and above):

Dhoni leads as expected, while Sarkar has the best by a non-keeper.

Fielding: Most innings dismissals (2 and above):

Several keepers and non-keepers have taken 2 innings, including Dhoni with 2 stumpings.

All-round performance (20 runs and 2 wickets in a match):

Only one instance, which came in the first T20I between these teams.