Small electric locomotives run on batteries have been used in mines and similar environments for a long time. As batteries are heavy, you would not find them on a full-sized locomotive unless there was a good reason for it. One example would be for running maintenance trains in underground railways when power is switched off.

Thus we have the battery tender attached to the YCG-1 metre gauge locomotives which ran between Madras Beach and Tambaram from the 1930s. As some of the stations had unwired turnouts, the locomotives had a battery tender to run on if the overhead wires were absent.

By the mid-1960s this section was converted to 25 KV AC and electrification was extended to Villupuram (which remained the only electrified metre gauge section in India). These DC locos were retired and a fleet of AC locos took over. The top half of the picture below shows one at the NRM in Delhi, minus the battery tender.

There were also two battery DC locos (this time on broad gauge) delivered to the old BBCI in 1927. They were to be used for shunting where steam locos were considered undesirable for some reason. There is a picture of it hauling a goods train in Carnac Bunder (under the Bombay Port Trust lines) in an old annual report of IR. 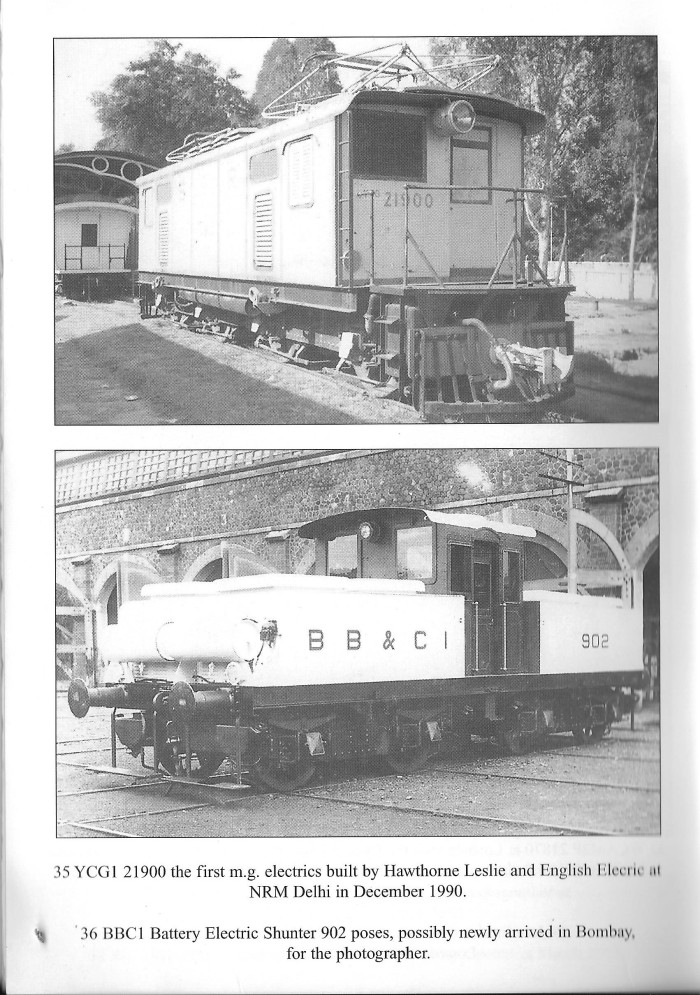 In this case (in the lower picture) the batteries appear to be inside the main body of the loco. In the upper picture we see a YCG1 which is preserved at the National Rail Museum in Delhi.

Stranger is the case of the NBM-1 narrow gauge (2-foot) locos, 3 of which were built by BHEL in 1987 for the Gwalior branch lines. No pictures of these seem to be available. But one wonders what purpose they served. Perhaps there was an urgent requirement for replacement of steam locos when no suitable diesels were available. However, these routes have been served by the NDM-5 class diesels which were also built at the same time. But I wonder if there is any example anywhere else in the world where battery locos were used for regular service where there was no electrified line to start with.

The railways of Pakistan have been going through a decline in the last few years for a variety of reasons, mainly government apathy and the lack of funds for modernization. One result of this has been the abandoning of whatever little electrified track it had.

By 1966, the 290-km route between Lahore and Khanewal had been electrified on 25 KVAC. 29 locomotives of 3000 hp rating were acquired from what was then known as British Rail Traction (including the conglomerate AEI and English Electric). These were classified as BCU30E and were numbered 7001-29. Here is one which is currently lodged at the museum at Golra Sharif (north of Rawalpindi):

And one of the few which were still running in 1996:

Later this longer clip appeared on Youtube. The dates are not clear:

In the initial years it was planned to extend electrification towards Rawalpindi and Peshawar but the presence of a few tunnels caused second thoughts. Another place where electrification would have been useful was the Bolan Pass route up to Quetta with its 1:25 gradient, the steepest main line in South Asia. Power shortages put an end to any further plans for electrification.

By the 2000s the traction lines on only one of the two  tracks were functioning. By 2009 the locos were showing their age and had been taken off passenger duties. The few which were functional were used on short goods trains. Here you can see one of these at Sahiwal (formerly Montgomery)  https://www.youtube.com/watch?v=TZ56AcTBAL0

By 2011, it was decided to stop electric services: http://tribune.com.pk/story/124828/pakistan-railways-electrical-locomotives-wrapped-up/

This TV report (in Urdu) is critical of the government’s decision, and also shows the railway worker’s reactions. https://www.youtube.com/watch?v=iBtDLBj4tH4

But it looks as if it will be a long time (if ever) when we can see electric locos running in Pakistan.

Reference: a good general description of most locos presently seen in Pakistan can be seen here:

Even in 2019, current videos on Youtube show the traction masts still in position although the overhead wires have been removed.