Here we look at the Test players with the highest dismissal rates, subject to a minimum of 20 innings fielded. These are correct as of Aug 31, 2020 and do not include the ICC XI Test of 2005.

Naturally, this will be headed by wicket-keepers who invariably get more catches than other fielders. But you would not have guessed that the highest average is by Rishabh Pant, who is generally not considered to be India’s best keeper at the moment.

The #2 is also not what you would expect. While Tim Paine did a good job as stopgap captain of Australia, you would not expect him to be so high up.

At #3 there is another current player in Quintun de Kock, who is likely to be SA’s next Test captain.

We have looked at those who failed to make a single fielding dismissal in their T20I and ODI careers. Today we conclude with Tests.

No fielding dismissals in Tests: 12 and more innings: 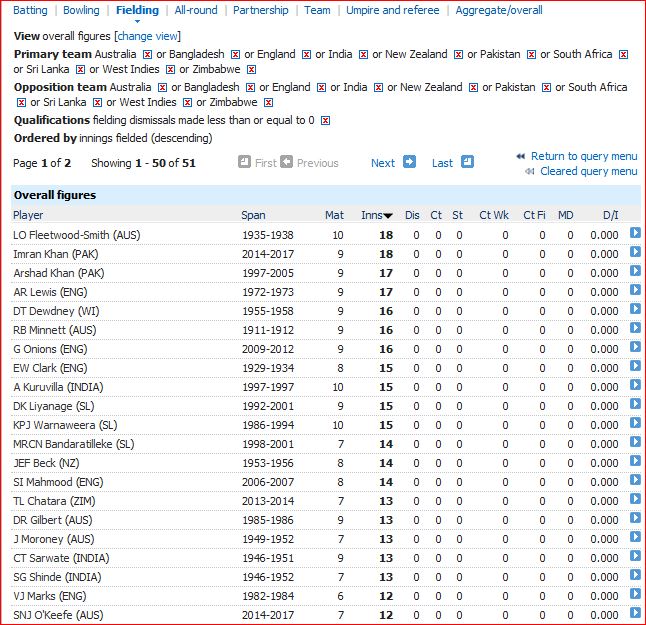 No fielding dismissals in Tests: 7 or more Tests: 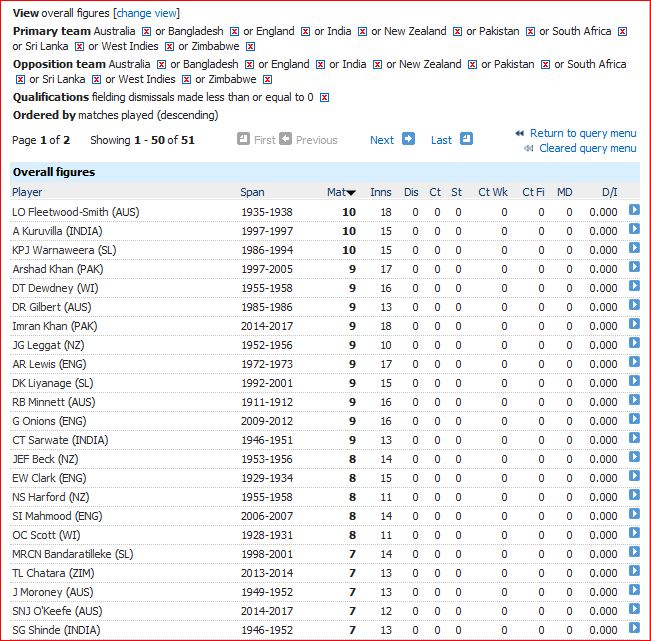 The record for innings is shared by Fleetwood-Smith and the current Imran Khan with no dismissals in 18 innings, followed by Arshad Khan and Tony Lewis with 17. Imran had a few other statistical oddities tagged on, including not facing a ball for several Tests as well as seeing his side winning his first 5 Tests. Tony Lewis was appointed captain on his Test debut in 1972-73, the last such appointment by England.

For matches, Fleetwood-Smith again has the record of 10 Tests shared with Kuruvilla and Warnaweera. Also note the current player Steve O’Keefe creeping up the tables with 7 Tests and 12 innings without making a dismissal. Imran Khan is here too and near the top with 9 Tests.

However, until recently the record of most Tests and innings without a dismissal was held by Pakistan’s comeback kid Mohammad Amir who did not take a catch in his first 19 Tests and 37 innings. There was much celebration in his 20th Test and 38th innings when he caught Darren Bravo off Zulfiqar Babar at Sharjah in 2016-17. He also took 3-71 in that innings, though the West Indies went on to win their first Test against Pakistan on a neutral ground.

What about wicket-keepers who failed to make any dismissal? There are several who made their debut without a dismissal, but only one who had no dismissal in his career (which lasted for 1 Test):

Humayun Farhat at least did score 20+ in both innings. He is the brother of Imran Farhat.

Finally, is there anyone who never fielded in his Test career? Statsguru cannot find anyone:

You may be thinking of JCW MacBryan, who did not bat, bowl or take a catch in his one-Test career. But he did field for 66 overs. It would be interesting to know if he ever touched the ball. Anyway, he had a sufficiently distinguished first-class career including being one of the Wisden Five in 1925 besides an Olympic gold medal in hockey.

In the previous post on fielding fails in T20Is, we saw that the “leader” Amir Hamza had played in many more matches and innings than the second-placed Rangana Herath. We see the same trend here in the list of those who failed to make a fielding dismissal in their ODI career (10 or more innings): 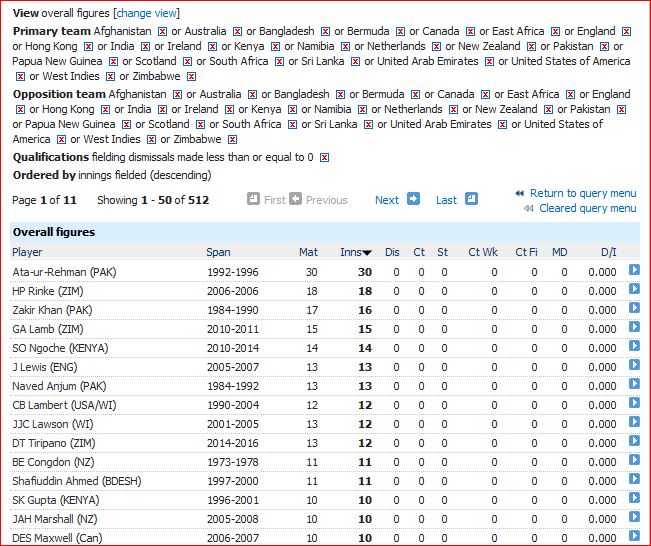 We have here some fairly well-known Test players including New Zealand captain Bevan Congdon, Jermaine Lawson and Clayton Lambert (who added a few ODIs for the USA after he had finished with the West Indies). But the leader here is Ata-ur-Rehman who played 13 Tests for Pakistan in the mid-90s, supplementing the bowling of the two Ws. His career ended in disgrace after the match-fixing scandal earned him a life ban from cricket in 2000. The ban was lifted in 2006 although he could not do much afterwards. However, he does have this record of 30 ODIs and 30 innings fielded without a dismissal, which is considerably more than the second-placed HP Rinke of Zimbabwe, with a mere 18 ODIs and innings. Jermaine Lawson had a brief Test career but still holds the Test innings record of 6 wickets for 3 runs.

We now look at wicket-keepers who failed to make a dismissal: 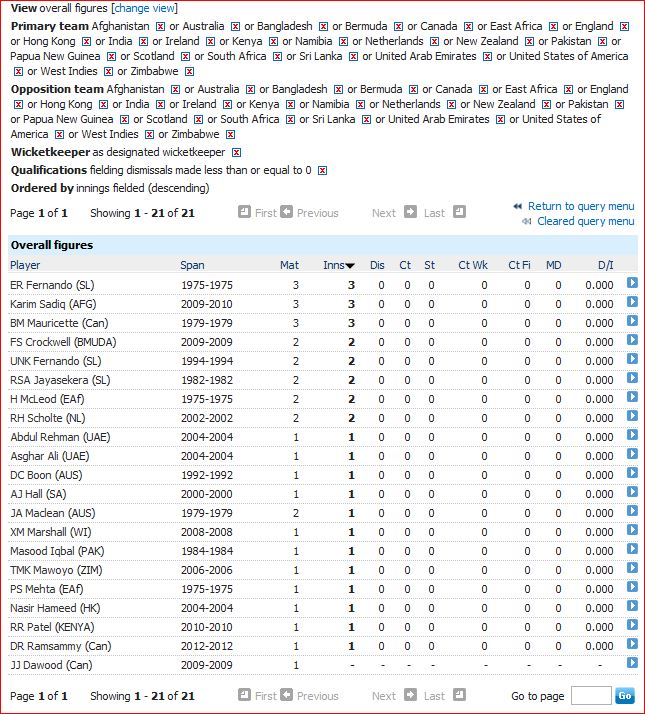 This is a complete list of all such instances. Here there are a few Test players such as David Boon (who kept in one ODI without success), JA Maclean and XM Marshall. Like Boon, Xavier Marshall was not a regular keeper but failed in the one match where he kept.

There is the unfortunate FS Crockwell of Bermuda (who became a homicide victim in 2016) and JJ Dawood of Canada, who never got to field in the match where he was the designated keeper. He did field in one other ODI when he was not the keeper, but did not take a catch there either.

Finally, we look at those who never fielded in their ODI career:

A short list indeed. Akila Dananjaya did not get to bat in Sri Lanka’s innings which was ended by rain which also washed out the entire New Zealand innings. He did however play some T20Is in which he took one catch. If he had become better known, cricket writers would have had to become more familiar with his full name of MKPAD Perera:

After looking at batting and bowling fails in all three formats, we turn our attention to those who failed to make any fielding dismissal in their careers.

Here we have these players arranged in order of innings fielded: 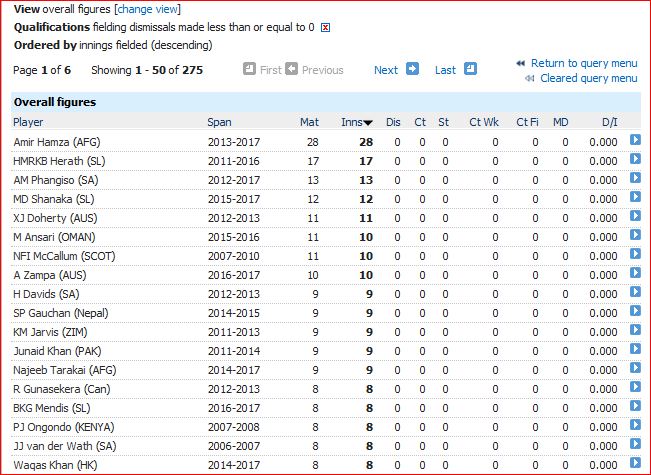 Amir Hamza of Afghanistan leads by a large margin over the better known Rangana Herath, currently the Sri Lankan Test captain and the only current Test player who made his debut in the 1990s.

Amir Hamza is an useful bowler but not much of a batsman either. But he is a regular for ODIs and T20Is at the moment.

A number of other somewhat well-known international players appear here, including some Test players.

You can see that the results would be virtually the same if you arrange them in order of matches played.

Now we look at wicket-keepers who have failed to dismiss anyone:

A number of Test and ODI players here, who have at least made some dismissals at those levels. The leader here is Regis Chakabva (9 Tests, 9 dismissals) followed by Carlton Baugh  (no less than 21 Tests, 43 catches and 5 stumpings). NV Ojha has played one Test and one ODI and has made dismissals in both.

Finally, we look at those who never fielded in their T20I career:

Nothing profound here. These two players from Netherlands were involved in a washed-out game against Ireland in 2008. As the toss was made, ICC rules state that this match counts in their career records. (Statisticians may disagree; as some disregard matches involving the ICC XI and their like, perhaps these matches should also be disregarded).

While Mol did play several ODIs, Schoonheim did not play for his country on any other occasion.

This is for all Tests in the calendar year 2016. 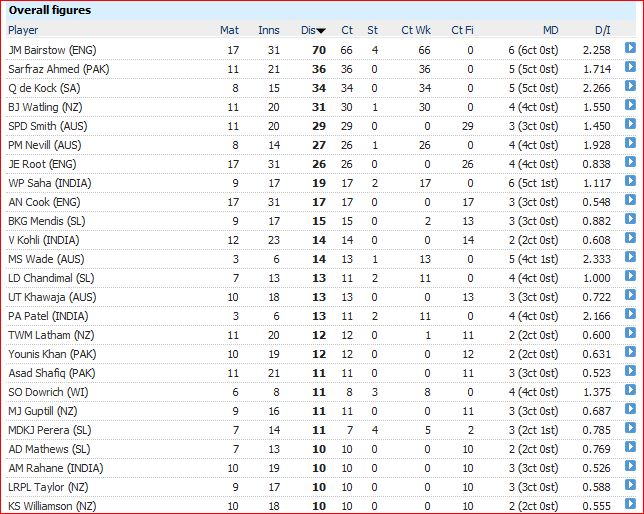 Note the relatively low proportion of stumpings, with Bairstow and Kusal Perera leading with 4. The most catches by non-keepers are 29 by SPD Smith followed by JE Root with 26. Also note that Bairstow’s tally of 70 dismissals is almost double that of the second-placed Sarfraz Ahmed. 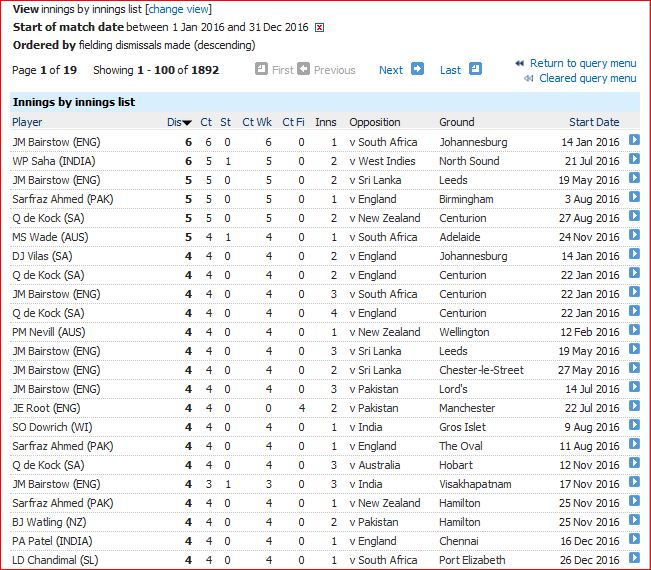 While Bairstow and Saha lead, Root has the highest for non-keepers with 4.

Most dismissals in a match (5 and above): 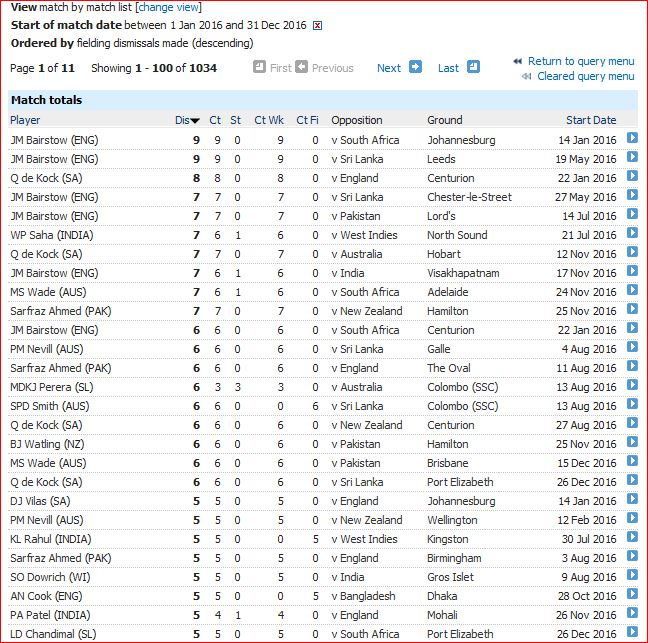 Note Bairstow’s dominance at the top, being the only one with two 9-fors, as well as several more near the top. The most by non-keepers is 6 by Smith. 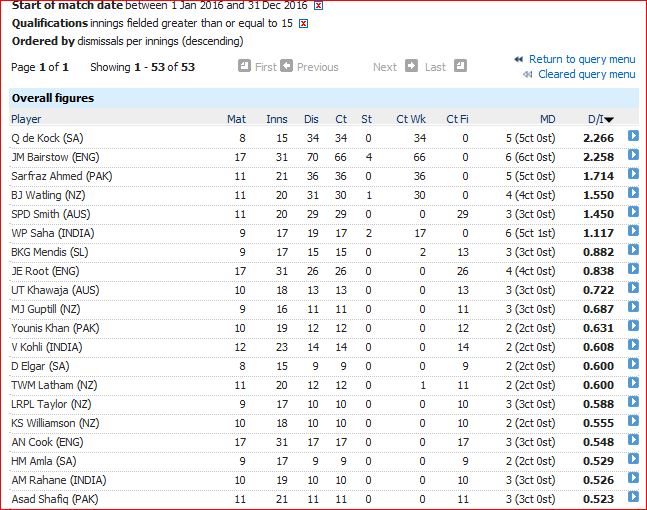 Here de Kock is a little ahead of Bairstow. Among the non-keepers, Smith and Root lead (along with Kusal Mendis who kept in a few matches)

Yes, even an embryonic series like this deserves a review 🙂

A total of 7 T20Is have now been played between these sides, all of them in Zimbabwe. India lead 5-2. CJ Chibabha and H Masakadza have played in all 7, while no Indian has played in more than 5.

There is not much point in calculating averages. strike rates and the like on such a small data set so we will confine ourselves to the best overall and match performances.

Chibhabha is far ahead of the rest while Raina has the most runs for India.

Raina and Chibhabha have the highest individual scores, although KM Jadhav made the highest score in the current series. 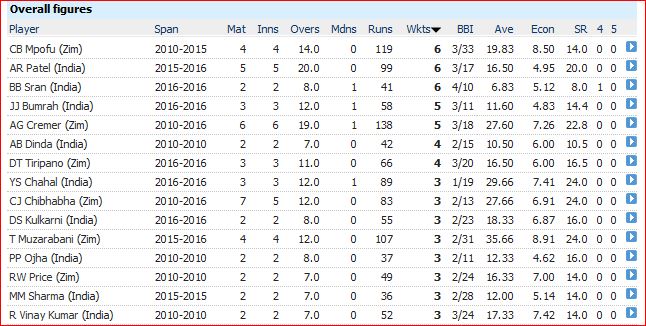 Mpofu, AR Patel and newcomer Sran have taken the most wickets.

Bowling-best innings figures (2 and above): 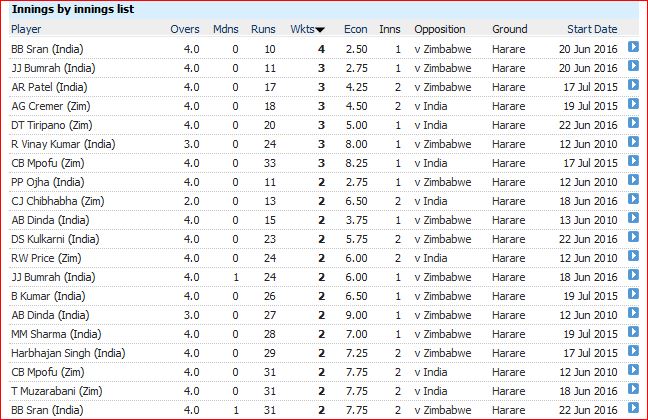 The two best performances are by Sran (on debut) and Bumrah in the current series. The previous best was by AR Patel in the previous series.

AR Patel has the most dismissals. The best wicketkeeping figures are by Taibu.

Innings fielding-most dismissals (2 and above):

No one has taken more than 2 dismissals in an innings. Taibu is the only keeper here.

Chibhabha is the only one who has some pretensions of being an all-rounder.

Tail piece: Although Zimbabwe’s captain AG Cremer could not do much in this series, he does hold a world Test record for the best 4-wicket innings bowling: 4-4 against Bangladesh.

This is to provide links to a few posts in the last few days, for those who are interested in the obscure byways of cricket history. These deal with the best performances of those who had only one match (or innings) in the three formats of international cricket: