Today we look at those who captained their sides in only one Test.

There are 46 such cases.

CA Smith is the only one here whose Test career ended with a win. He did take 5 wickets in an innings and seven in the match, which was the first Test ever played in South Africa. But this Test status of this series was decided several years later.

He finally ended up in Hollywood: https://en.wikipedia.org/wiki/C._Aubrey_Smith

He was unfit for the second Test, and another player MP Bowden captained for his only Test. He died in Rhodesia in 1892, and Wisden’s obituary did not mention that he had played in Tests.

This list includes many prominent players, notably Harvey, Bill Brown and Shastri. Shastri was fortunate in having ND Hirwani take 16 wickets on debut.

Mashrafe Mortaza was also fortunate in that he was injured early in the Test and still gets credit for the win where Tamim Iqbal captained for most of the Test. It was Bangladesh’s first Test win abroad and second overall – though the West Indies was effectively fielding a third XI due to boycotts by many players.

This includes Craig Ervine, Tom Latham and Ben Stokes from 2020, and two prominent players from India in Chandu Borde and Pankaj Roy. Also 3 who were playing their only Tests – two South Africans and one West Indian from the early days of their teams.

DB Carr is lesser known and played only 2 Tests. His captaincy saw India winning their first Test. He was vice-captain of that England team, while the captain was the equally undistinguished ND Howard who played his only 4 Tests during that series.

Finally, the 16 who drew that Test:

None from recent years. HR Adhikari is the only one from India, who was credited with ending a sequence of 3 successive losses (although India came close to losing that Test as well).

There are a number of well-known players here, such as Deryck Murray, Gary Kirsten, George Headley, Mark Butcher, Ray Lindwall and Tom Graveney. Also note another early South African playing in his only Test.

George Headley would have captained the West Indies earlier and in more than one Test, but for the policy of only having captains of European ancestry.

The 3-Test series was won 2-1 by the West Indies, with all three matches ending in decisive results. West Indies won their first series against England since early 2009. They have not won a series in England since 1988, and did not win a Test in England between 2000 and 2017.

The overall results are:

The West Indies still enjoy an overall lead and at home, while England leads them in matches played in England.

We now come to individual performances: 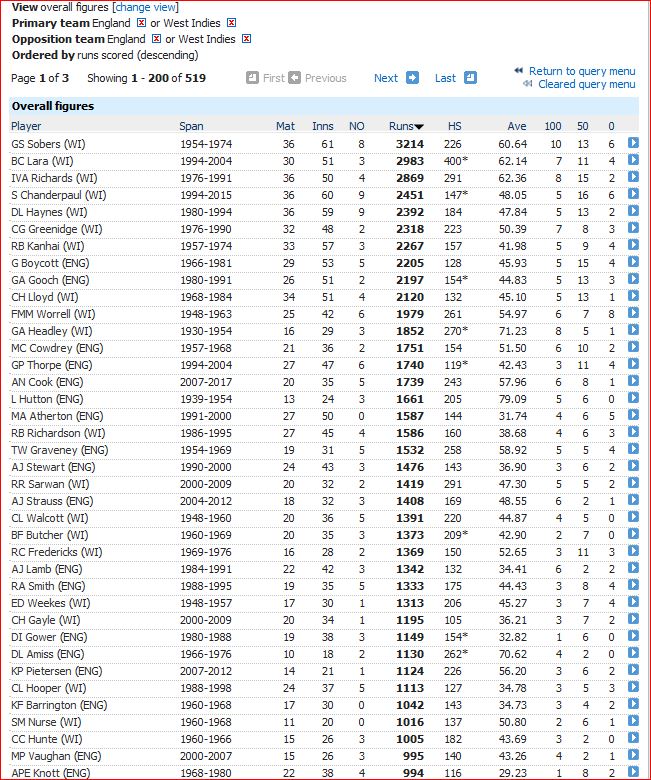 A long list without much contribution from recent years. The only name from the past few years is AN Cook.

Highest innings scores (175 and above):

This list is led by Lara’s world records and is followed by Sandham’s score which was the first Test triple century. The only such score from this series is captain Holder’s 202*, while Cook scored 243 in the last series in 2017.

Yet again, Cook is the only representative in recent years with his 57.96. Hutton and Headley are far ahead of others, and they both played their last Test in this series in 1954.