As many as 118 Test players played in 5 or more matches and never saw a draw. These are the top few:

This list is headed by a current player Aiden Markram:

Next is the 19th-century player GA Lohmann (18), England’s leading pace bowler of that time.

Then there is the near-current player KK Jennings (17) who has some chance of playing again, along with Alok Kapali with his record 17 losses. Baptiste with his 10 wins is further down.

From India there is a current player HH Pandya (11).

Of course, Markram will lose his status once he plays in a drawn Test, which means that the record will go back to the venerable George Lohmann.

South Africa last had a draw in March 2017. This was followed by 34 Tests with results. Thus a number of junior Test players from there have 5 or more Tests without a draw. This applies to most of the current team.

Anderson has the most wickets, closely followed by SM Pollock.

Anderson, Broad and Rabada are the current players here. 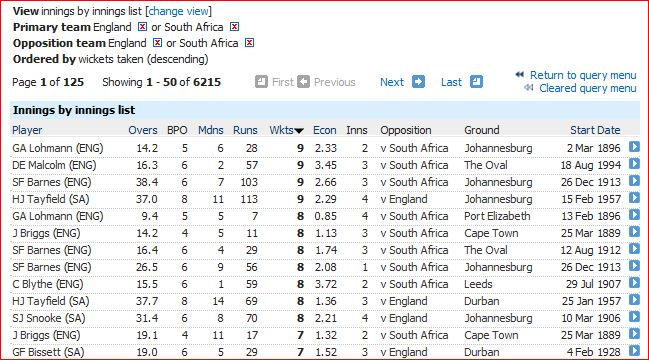 This is headed by Lohmann, whose 9-28 is the most economical 9-for in all Tests. Nothing after 1994. 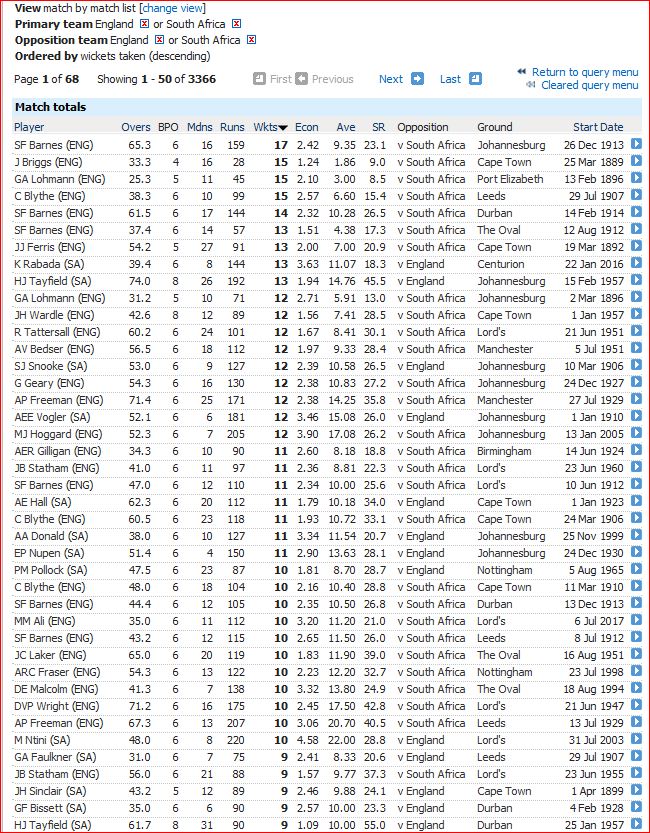 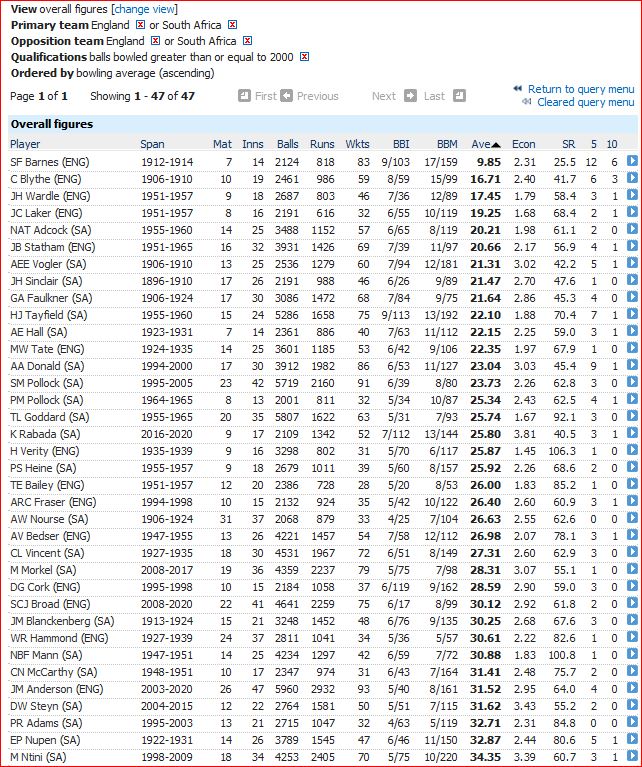 Boucher has the most dismissals (105) and catches (103), Evans the most stumpings (12) and Mitchell the most catches by a non-keeper (43). The recent players here are de Kock followed by Bairstow and Stokes. 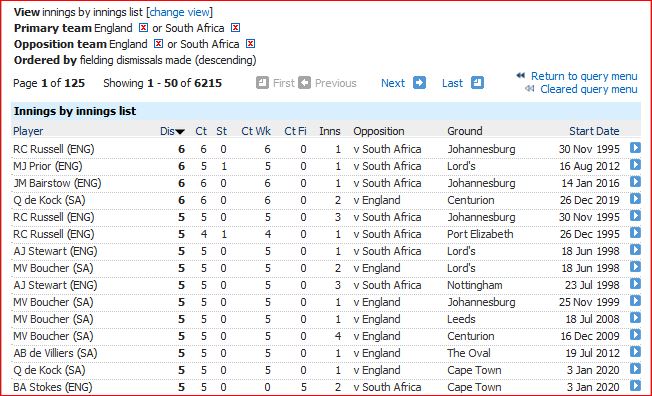 de Kock has the best performance among current players. Stokes is the only non-keeper with 5 catches, which he did in this series.

Most match dismissals (7 or more): 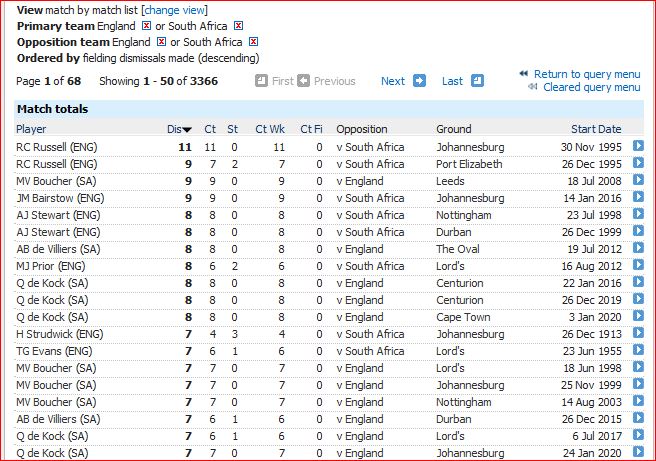 RC Russell’s 11 dismissals is a share in the world record also held by de Villiers and newcomer RR Pant. 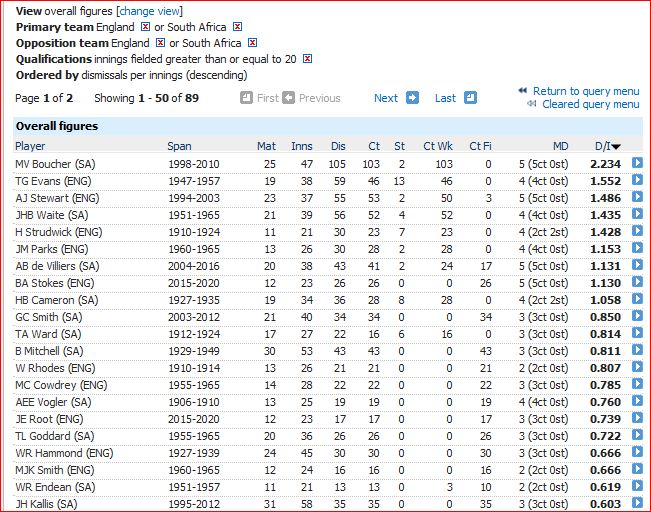 Boucher leads here, while Stokes has the best rate for a non-keeper. de Villiers and Root are the other current players here.

Includes some with the double of century + 5wi (Sinclair, Faulkner) and fifty + 10wm (MM Ali). Philander and Maharaj are also here, with the latter doing this during the current series.

As readers of this column know, Aiden Markram has the longest palindromic name among international cricketers, with the competition coming from Rangy Nanan and Arun Lal.

Apart from that, he had a good run at the start, with 97 on debut and centuries in his second and third Tests. (It helps if you are playing at home in South Africa against Bangladesh for two Tests followed by Zimbabwe).

Anyway, he was a sort of lucky charm for South Africa as they won in each of his first 5 Tests. India broke this spell when they won the 3rd Test of the 2017-18 series.

He had a bad tour of India in 2019, making a second-ball pair (or silver pair) in the second Test before being dropped for the third.

Anyway he holds another peculiar record in all Tests. He has played the most Tests (29) without ever seeing a draw, up to Jan 15, 2022. 18 of these matches were won by South Africa and 11 were lost.

The record was earlier held by England’s George Lohmann (18 Tests) of long ago, who saw 15 wins and 3 losses. Next is a recent player KK Jennings (Eng) with 17 (12 wins and 5 losses). Alok Kapali (BD) shares this tally of 17 (0 wins and 17 losses). Once Markram encounters a drawn Test, the record goes back to Lohmann.

I wonder if anyone has told Markram of this record. At least it sounds more impressive than being the 21st batsman to make a silver pair.

Ever wondered about the average of Test bowling averages?

There are 613 bowlers fitting this criteria. A full statement:

The average or mean bowling average is 34.45, which corresponds to that of JE Taylor and KD Mackay.

Looking at other measures of central tendency:

We also have the Economy Rate, which ranges from 1.31 runs/over for W Attewell to 4.16 for Shahadat Hossain.

And the Strike Rate, which ranges from 34.10 balls/wicket by GA Lohmann to 291.00 by EAR de Silva. Remember that they have the best and worst bowling averages as well.

We may as well have a closer look at them:

Next we will take up the difference between home and away bowling averages, as was done for batting averages in a recent post. 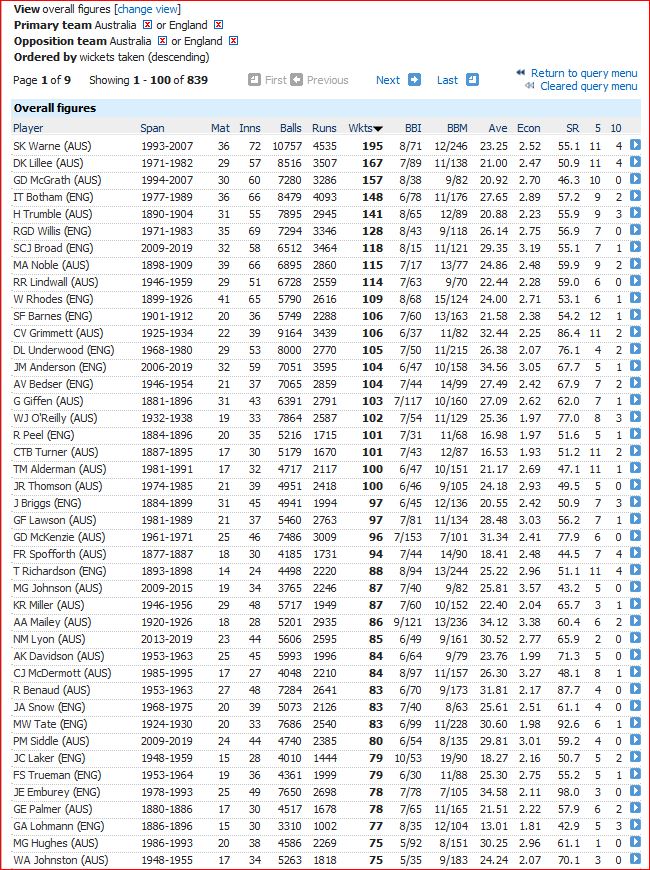 The most 5-wicket hauls is 12 by SF Barnes, while several others have 11.

The highest among current players is 118 by Broad. Lyon and Siddle are also here.

Best innings bowling (including all instances of 8wi and better):

You don’t need to be reminded about the first two entries. The only one from a current player is Broad’s 8-15 in 2015.

Best match bowling (all instances of 11wm and better): 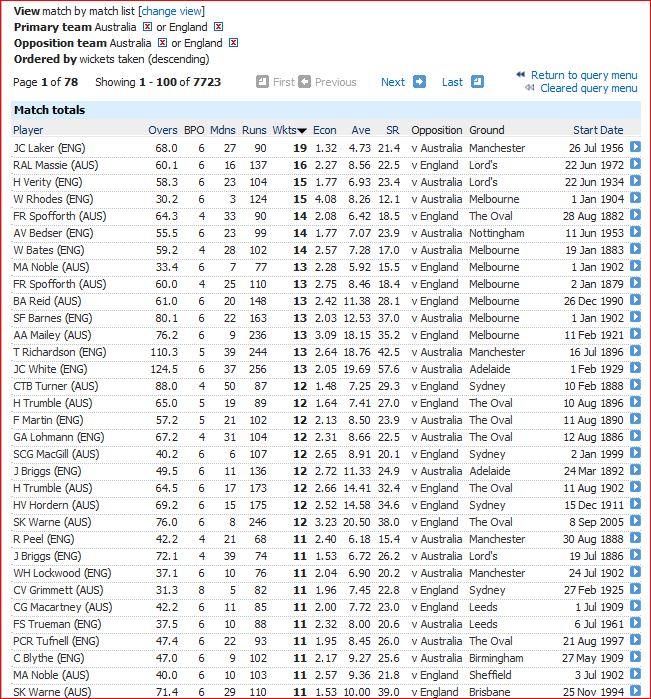 Nothing from recent years.

As you may guess, the top positions are all from the 19th century. From current players we have Cummins and Hazlewood.

Most dismissals (30 and above): 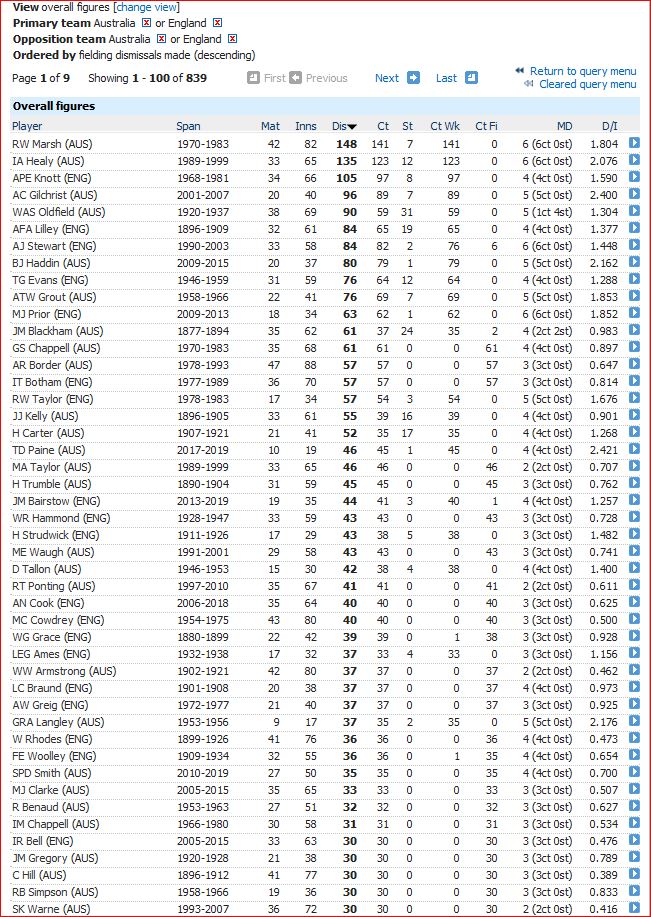 The most dismissals and catches by a keeper are by RW Marsh. But the record for stumpings is 31 by WAS Oldfield (who still holds the Test record of 52). The most catches by a non-keeper are 61 by GS Chappell, followed by Border and Botham with 57.

Best innings fielding: 6 and above

No non-keeper has taken more than 4 catches in an innings.

Best match fielding: 7 and above 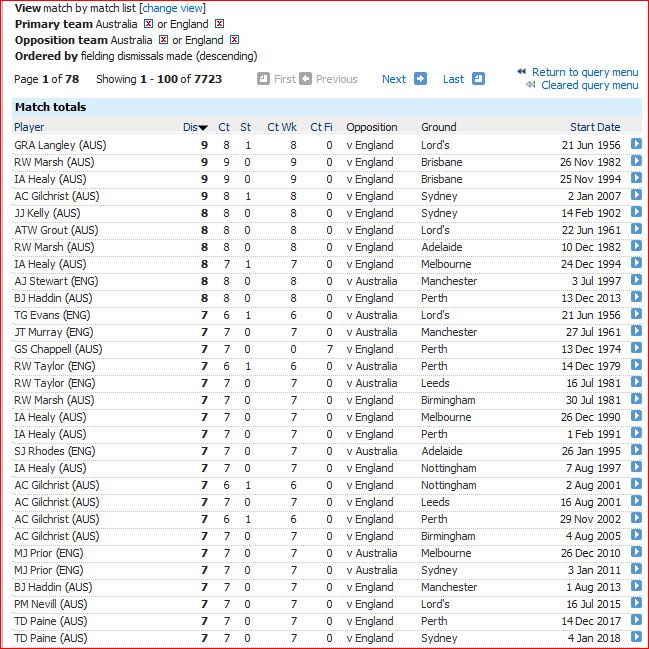 Headed by Gilchrist, followed by Haddin and Healy. The best by non-keepers are by LC Braund, WG Grace and AW Greig.

KR Miller heads this list followed by two from the 19th century. Broad is the only current player here, although he is currently batting at 10 or 11.

The best performances include 100/5wi by JM Gregory and Botham (THAT match in 1981), besides 50/10wm by W Bates, Trumble and Woolley of long ago.