Only 25 cases here. The top few are less-known except for LK Germon who was captain relatively recently. He was brought in as captain as the selectors felt that no other suitable captain could be found among the existing players. Sherwell and Germon were both wicketkeepers.

Tail piece: LK Germon does possess an odd record-he has scored the most runs on debut without scoring a fifty; 48 + 41 = 89.

We also see James Lillywhite jnr of England who captained his side in the first 2 Tests ever played and never played another,

In some cases certain players were appointed captains as they were amateurs rather than professionals, or if they were from the “nobility” as in the case of “Vizzy” and his British counterparts. In the early days of West Indies cricket, the captain was chosen from the players of the territory where the match was being played.

But clearly the players listed above were not good enough to stay in the team if their presence as captains was not essential. Vizzy, for example, was clearly not competent enough either as a batsman or captain.

It is also interesting to note that the last 5 players made only a single Test appearance, in which they captained. The best known was CA Smith, later known as Sir Audrey Smith of Hollywood where he typically played roles of elderly Englishmen.

Now we go on to those who never captained in Tests.

There are over 1500 who played 5 or more Tests without ever being captains. Here we list

Those who played 85 or more Tests without ever captaining:

England’s current players Anderson and Broad are in the first and third places, Anderson having crossed Warne’s mark of 144 recently. The national record holders would therefore include Anderson (149 for England), Warne (144 for Australia), VVS Laxman (134 for India), Muralitharan (132 for Sri Lanka), Ntini (101 for South Africa), CEL Ambrose (98 for WI) and Sir Richard Hadlee (86 for New Zealand). Further down there is Mudassar Nazar with 76 for Pakistan, GW Flower (67 for Zimbabwe) and Javed Omar (40 for Bangladesh).

There may be various reasons why they were never considered suitable for captaincy. However, Warne did captain Australia in a few ODIs. The knowledgeable feel that he may have been a better captain than some of his contemporaries. 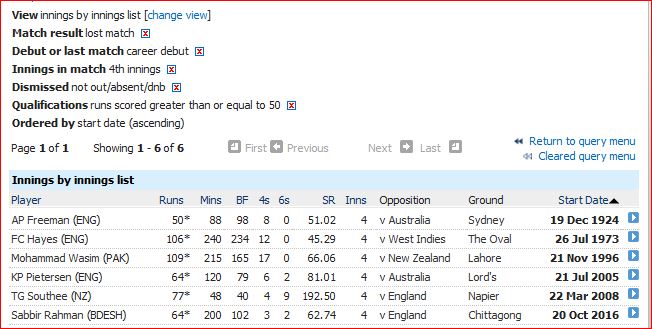