After covering batting fails in T20I cricket, we proceed to ODI cricket.

Data is up to 3 Feb 2017. Matches involving the ICC XI, Asia XI and Africa XI are not counted.

We start with those who never scored a run in ODI cricket. 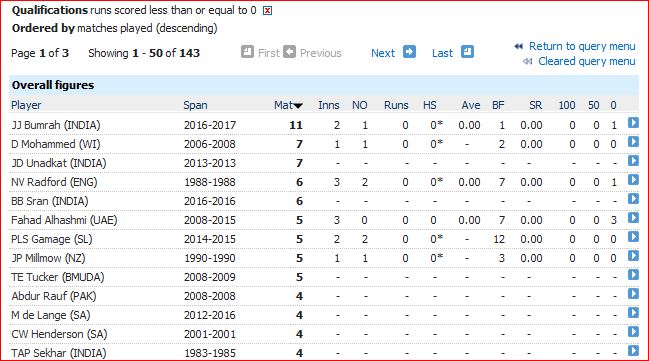 Jaspreet Bumrah, the T20I leader, leads here again followed by D. Mohammed and JD Unadkat. Unadkat is one of several who never got an opportunity to bat.

Next we take up those who played in the most innings without scoring a run.

Here we have 3 cases of players who got to bat in 3 innings and did not score from the balls they faced. Radford and Kabir had brief Test careers. Bumrah faced the least balls here (1) and was dismissed by that ball.

We now look closer at those who never got to face a ball in ODIs.

Unadkat has played in the most matches (7) without ever going to bat. He is followed by a more recent Indian player BB Sran with 6. This list included Lance Gibbs and two lesser-known Test players who played one innings but did not face a ball.

Finally we look at those who played the most innings without facing a ball:

The record is one innings, achieved by these:

Of these, AGR Loudon was run out as a non-striker and was dismissed without facing a ball. And Aminul Islam (jnr) scored one run off zero balls. Presumably he scored off a no ball, though it is difficult to check this as the commentary of 1999 is not available.