Continuing our study of routes which were listed in the All India Timetable of 1975 but not now, or now  in substantially different form.

The route maps of the Indian Railways have undergone major changes since 1975.Construction of new lines, large-scale gauge conversion and the upgrading of many hitherto minor routes have all taken place.

Here we start with the All-India Time Table of November 1975 and see which lines have vanished from the passenger timetable.

The timetable was arranged in alphabetical order, so we started with the Central Railway as it then was. Next is the Eastern Railway.

Note that we are here using scans of scans, so some of the old timetables may not be as legible as we would wish.

At that time, the main ER timetables included the suburban lines. (The Metro was far in the future). One development was the two NG lines of McLeod & Co (Ahmadpur-Katwa and Burdwan-Katwa) being acquired by the government and transferred to the ER.

And parts of ER have become part of the new East Central Railway.

Now we look at what has vanished: 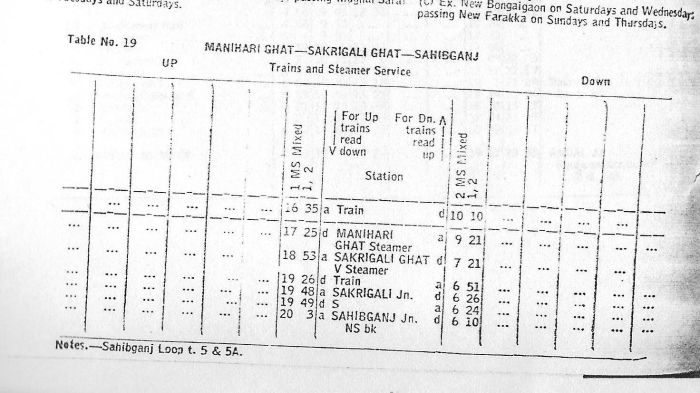 While rail and road bridges have been opened at several places in this part of Bihar, there does not seem to be anything planned here.

Pandabeswar to Palasthali has been closed after Bhimgara for some years, due to subsidence caused by illegal mining. It is not likely to reopen.

Then there is the Andal-Gaurandi section. The Ikra-Gaurandi section is no longer part of IR. There may have been a non-IR siding earlier, but no track can be seen on Google Maps.

You can still travel from Dhanbad to Pathardih, but NOT via Jharia. As most of us know, underground coal fires have been burning since 1930 and show no sign of abating. This line was closed in 2005 and its future is uncertain. Rather, the future of Jharia is uncertain.

The section from Pradhan Khunta to Pathardih was not in the 1975 timetable, though it was used for goods.

Trains currently running on this route are:

Finally, the steamer services between Monghyr (now Munger) and Monghyr Ghat (linked to Sahebpur Kamal). Today there is  a bridge on a different alignment. A new station for Munger has come up.

And finally, evidence that this is indeed from 1975.

Trains now running across the Ganga via Munger:

The routes include a new junction at Sabdalpur, where lines separate towards Sahibpur Kamal on the west and Khagaria on the east.