I had earlier summarized information about the 9 non-government railways which were separately listed in the All-India Timetable of 1964. None of them exist in NG now, they have either been converted to BG or closed for many years.

As there is interest in timetables of these and other vanished lines, I am giving some extracts of the June 1944 Bradshaw which covers all the lines which were apparently not part of the larger railway systems of that time. Some survived into the 1960s and beyond and others closed much earlier.

Here we see the lines of the Bengal Provincial Railway, which closed in 1956:

Both these lines were purchased by the Government transferred to the Eastern Railway in 1966, where they continue till now after being fully converted to BG and electrified.

Also the Dehri Rohtas Light Railway, initially owned by the Octavius Steel group and then the Sahu Jain group. It closed in 1984 and is not likely to be revived. 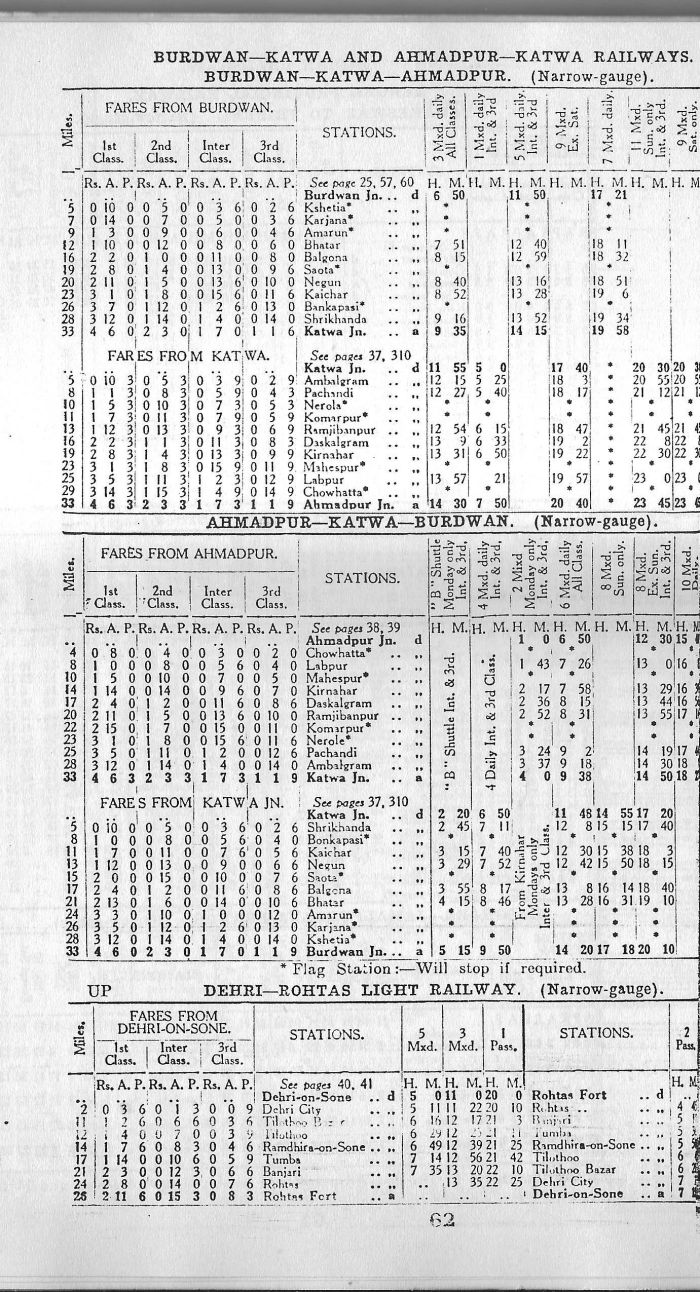 The 4 lines here were all part of the Martin Burn group:

Was closed in 1986, converted to BG and became part of ER (and then East Central Railway).

Closed in 1978, converted to BG and became part of ER (and then East Central Railway).

Closed in 1970, converted to BG and became part of Northern Railway. 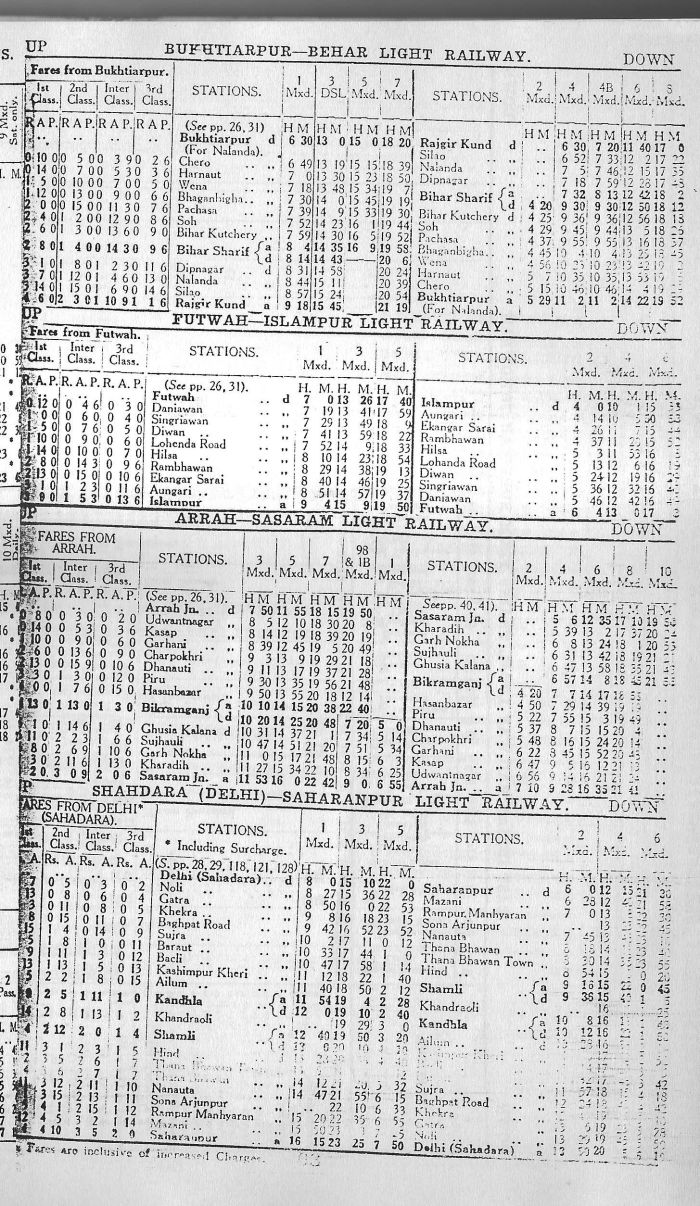 The Barasat Basirhat Light Railway (which had other owners, NL Roy and Sons Ltd)

This was closed in 1955. In 1962 the Barasat-Hasnabad BG line was opened with a similar alignment.

Also from the Martin Burn group:

Next is the Howrah-Amta Light Railway. This was also of 2’0″ gauge.

Like its sister line above, it closed in 1971. The Howrah-Amta section was converted to BG and electrified, and is now part of the South Eastern Railway. It is unlikely that the Champadanga branch will be revived.

The Rupsa-Bagerhat Light Railway, now in Bangladesh. This was converted to BG in around 1970 but was closed soon afterwards.

The Bankura Damodar River Railway (from the McLeod & Co group):

This was transferred to the South Eastern Railway and converted to broad gauge in the 2000s. It was extended from Rainagar to Gram Masagram (near Masagram on the Howrah-Barddhaman chord).

This was closed by 1957. A road now runs over the alignment. 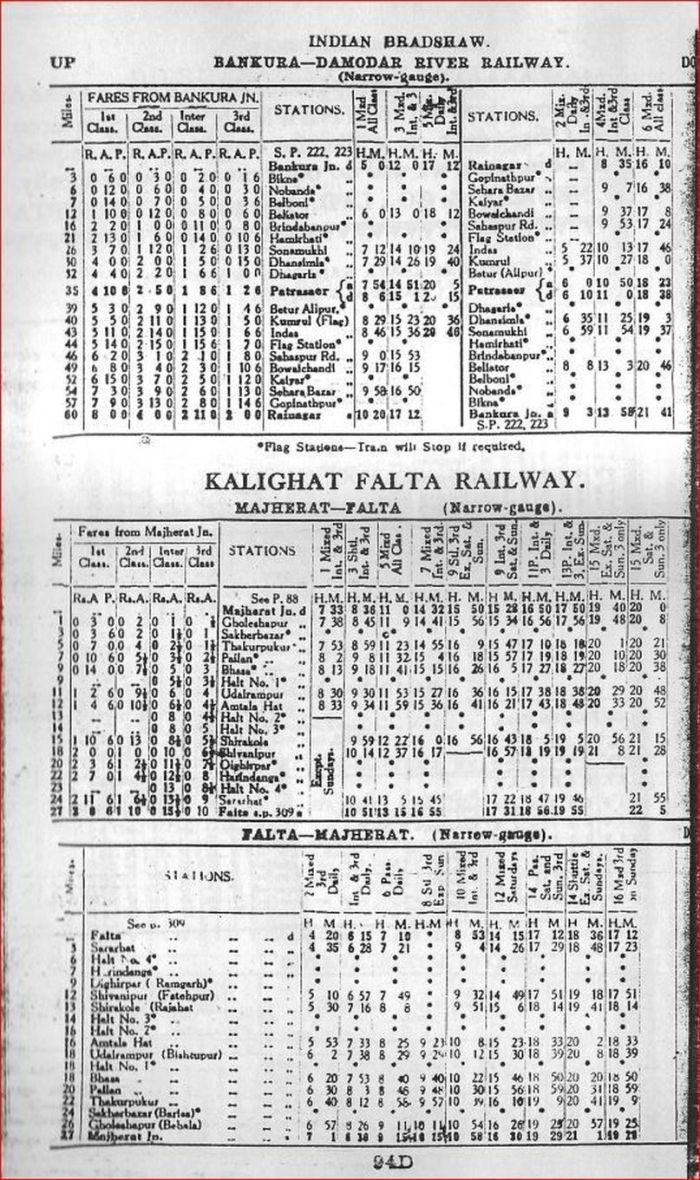 The Darjeeling Himalayan Railway, which needs no introduction. The 2’0″ line from NJP and Siliguri continues to run much as it has since the 1880s, except that diesels now haul the regular trains.

It was initially part of the Gillanders Arbuthnot group. By this time it was considered to be a part of IR and not a  non-government line.

The line from Siliguri to Kishanganj was converted to MG as part of the Assam Rail Link in 1948-50, and to BG more recently.

The Teesta Valley branch continued running until 1950. The section between Siliguri and Sevok was converted to mixed NG/MG gauge until the hill section up to Gielle Khola was damaged by floods in 1950. The hill section was closed and the NG line removed from Siliguri to Sevok which continued to be part of the Assam Rail Link. Today it is broad gauge.

The Tezpur Balipara NG line was initially run by the local agents Kilburn & Co. In 1952 it became part of the Northeast Frontier Railway and converted to MG. Still later it was converted to BG although the terminus is now Dekargaon, north of Tezpur. 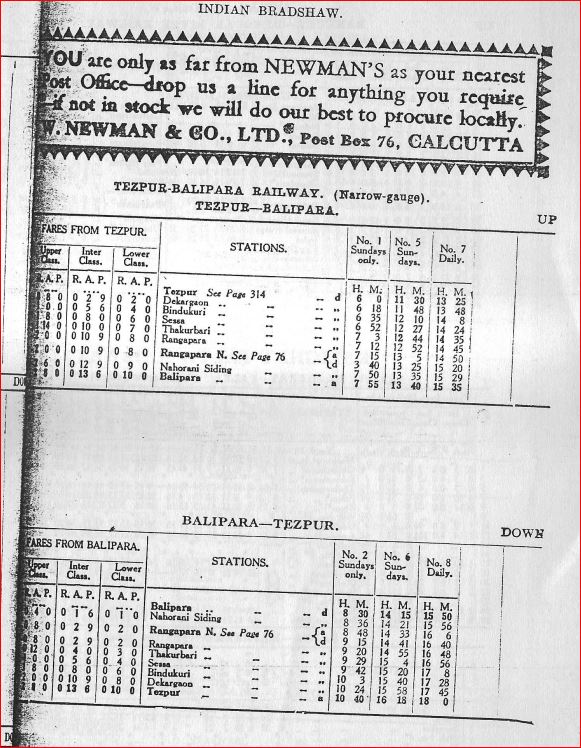 And finally the Jagadhri Light Railway, which closed in 1950:

This, then, is the summary of all NG lines which were not part of the major railway companies in 1943. A brief history of the later developments has been given.

The links provide sources of more information from Wikipedia and Fibis.

There were still other NG lines which had closed by 1940, mainly in  southern India. A few were part of the major companies of IR and others were privately owned. Most of them never reopened.