We have all heard of the train to Darjeeling, but there was more to it than the single line from Siliguri to Darjeeling. This should be apparent from these timetable extracts from 1943. These are not from the Bradshaw which had rather poor print quality, but from another source (more about that later). 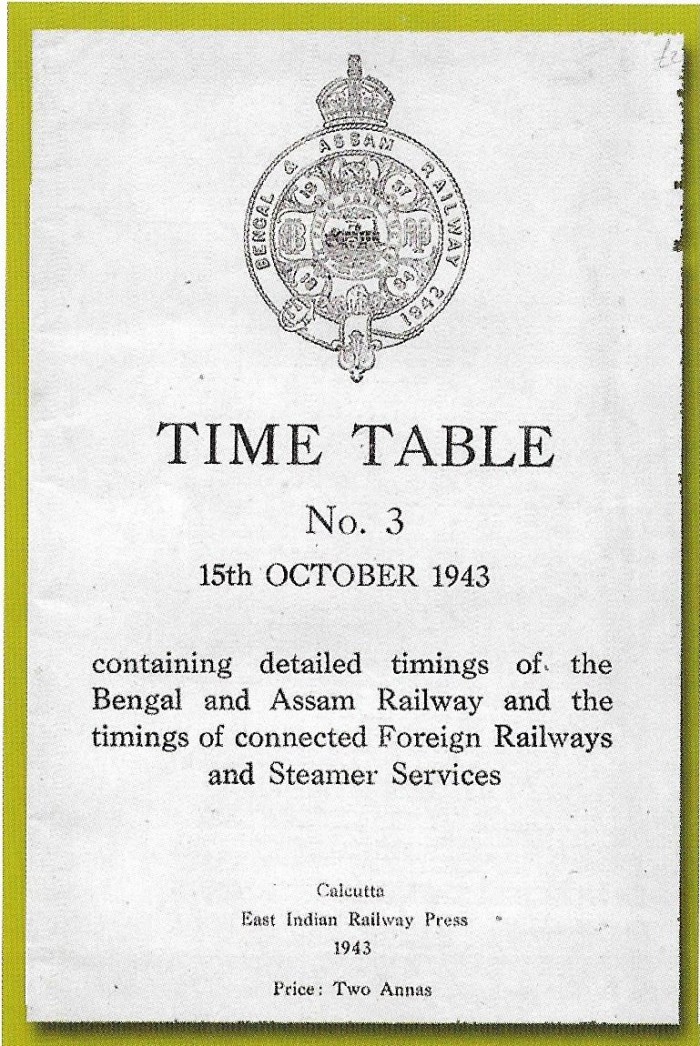 First, this is an extract from the Bengal & Assam Railway. See its logo showing that it was founded in 1942. This was an emergency measure following the outbreak of World War 2 in Asia. The old stalwarts Eastern Bengal Railway (HQ in Calcutta, main station Sealdah) and the Assam Bengal Railway (HQ in Chittagong) were merged to form the B & A Railway to make it easier to manage rail transport east of Calcutta. Essentially the running of the railways was taken over by the US armed forces.

Of course, the B & AR was broken up after partition and its tracks are now spread over the present Sealdah  division of ER, the NFR, and Bangladesh Railways.

The Siliguri station here was the BG terminus where long-distance trains such as the Darjeeling Mail used. It was located at the station now known as Siliguri Town. Note the connection between the Mail arriving at 06.44 and the NG train (also called the Mail) at 06.59, and in the reverse direction when the passengers presumably had their dinner at Siliguri.

The present Siliguri Jn was opened as part of the Assam Rail Link in the late 1940s. It is located at the former wayside station of Siliguri Road seen above.

When New Jalpaiguri station was opened in the early 1960s, the NG line was extended south from Siliguri Jn to there passing through Siliguri Town, which had gone from being a major terminus to an unimportant wayside station.

Panchanai Jn was the point where the DHR branch to Kishanganj turned towards the left. There is no sign of it now. There have been various other changes pertaining to loops and reverses. One result of this is that Chunabhati station is no longer on the route. This timetable does not show the numerous halt stations which have mostly vanished without a trace, though Batasia is now a stop for the joyride trains between Darjeeling and Ghum.

Now for the rest of the DHR:

The Siliguri-Kishanganj Extension and the Teesta Valley Extension were built later (dates given below). The Kishanganj line provided a connection to MG trains from Barsoi and Katihar side. Being in the plains, it did not need the special B class engines but used more conventional ones. Apart from the usual 4-6-2s, there was also a Garratt.

This line became the starting point of the Assam Rail Link, enabling MG trains from the Katihar side to enter northern Bengal. Note that many of the stations (including Naksalbari and Baghdogra) became part of the MG line though there were some changes in alignment. For instance, the new MG line went directly from Matigara to the new Siliguri Jn without crossing Panchanai (where the station was demolished).

The Teesta Valley Extension had an unfortunate end. Initially the Assam Rail Link followed it up to Sevoke. There was a mixed gauge line from the new Siliguri Jn to Sevoke. Here the TV line turned north while the new MG line crossed the Teesta just east of the station and continued eastward to join the existing MG system at a place which became known as New Mal Jn, and finally to Fakiragram and beyond.

The terminus at Gielle Khola seems to have been known as Kalimpong Road in the earlier days. A ropeway connected this station to Kalimpong.

But this line did not last long after Independence. Severe flooding damage occurred in early 1950 which resulted in the line being closed permanently. Though the tracks ran close to the highway towards Kalimpong and Gangtok, you are not likely to see any trace of the line now unless you take the help of local experts. And the NG line from Siliguri to Sivok was pulled up as it no longer had any purpose, leaving a pure MG line behind. In the  2000s the entire MG route in this area was converted to BG.

The above information is from a nice little booklet called “A guide to the Darjeeling Himalayan Railway” by Richard Wallace, first edition in 2000. There is a more detailed second edition published in 2009.

There is another useful book by R.R. Bhandari which may be available at the bookstall at the National Rail Museum at Delhi.

Numerous other books (mainly of British origin) are also there. Some may be available from bookshops in Kolkata and the Darjeeling area.

Other useful links include:

The Kalka-Shimla mountain railway is one of the best-known railway lines in India and has featured in a number of literary works and at least one BBC documentary in recent years. This is intended to summarize the main points about the line as it is today. The route was opened as a whole (95.68 Km) on 9 Nov 1903. A further 0.77 Km to the “Old bullock train station” was opened on 27 Jun 1909. Possibly the present line (length 95.57 as per current railway database) includes a small portion of the extension. Here we have a list of stations (in both directions). This information is taken from the site http://rbs.indianrail.gov.in/ShortPath/ShortPath.jsp which is useful for the dedicated railfan. I have added the altitude data from passenger timetables. The distances shown below are actual distances, and I am not getting into the complexities of chargeable distance here. 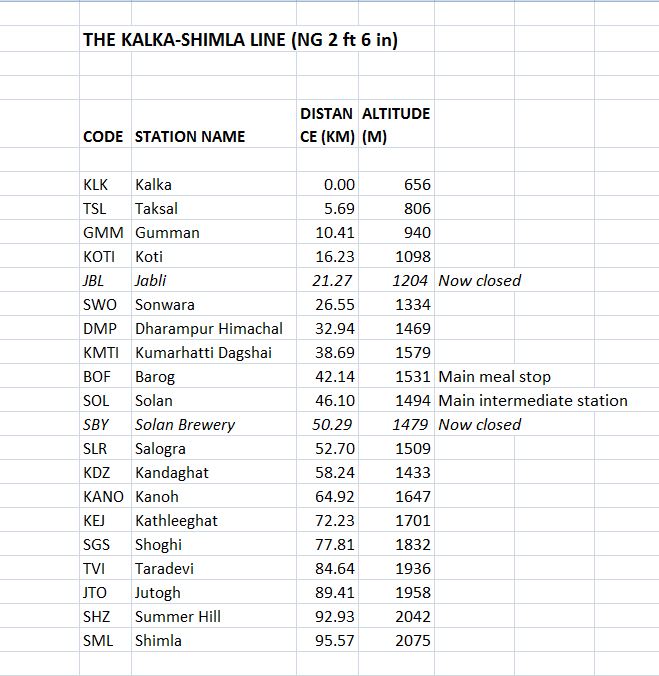 The main technical point is that the ruling gradient is 1 in 33 uncompensated. Those who are really fond of number crunching can find the gradients between intermediate stations. Here are the summary of trains running in both directions in May 2015.

As you can see, trains are listed as having AC chair car, First Class and Second Class seating. The railcars have only first class. The Shivalik Express and the Himalayan Queen have non-AC seats which are somewhat better than the second class seats, but are charged using the fare tables for AC chair car. The three trains other than the railcar and Shivalik Express have unreserved second class seats, though reserved seats are available only on one train as you can see above.

It is common for the average person or media source to refer to the trains on this line as a toy train. This appears to be unjustified as the trains are as long and as heavy as their narrow gauge counterparts on the plains. And the volume of passenger traffic (at least 5 pairs of daily trains) would be more than that on many broad gauge and metre gauge branch lines.

Additional railcars and trains may run at short notice during the summer. These are generally not given in the printed timetables. However, most knowledgeable travellers have now shifted to the online timetables. The most user-friendly is probably http://erail.in/  from where the above tables are taken. One can also use this website to get timetables for individual trains, such as this one for the downward Himalayan Queen:

This train connects with a BG express train to New Delhi in both directions. That is also called the Himalayan Queen, though it starts from Kalka with a number of coaches which are removed at Panipat and proceed to Bhiwani as the Ekta Express. There are also two Shatabdi Expresses to New Delhi and the long-standing Kalka Mail to Old Delhi and Howrah, which is probably one of the oldest long-distance trains on IR. There is also a link train which connects Kalka to the Paschim Express to and from Mumbai.

There are many videos about this line available on Youtube; as a sample here are some taken by my family in 2010:

And from Shimla to Kalka by the Himalayan Queen, plus a bit of Chandigarh: