Earlier we have dealt with the renaming of Allahabad Jn and nearby changes to reflect the old name of Prayagraj. There are a number of other name changes in UP over the last couple of years. Some are well known and others have been hardly mentioned in the media.

The most well known change was this:

As in the case of Allahabad/Prayagraj, there was a long gap between the announcement of the change and its actual implementation. So a number of photoshopped pictures appeared in the local media, like this:

As we know, Pandit Deen Dayal Upadhyaya was found dead near this station in 1968. The circumstances of his death have never been satisfactorily explained, and may well become a never-ending mystery like the deaths of Subhash Chandra Bose and Lal Bahadur Shastri.

Other changes which attracted less attention:

Farah Town (between Mathura and Agra Cantt) became Deen Dayal Dham – as Panditji was born in that area.

Robertsganj became Sonebhadra (which is the name of the district): 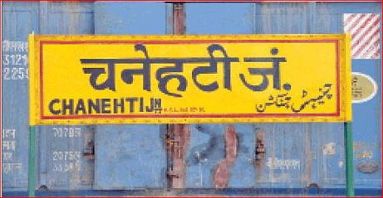 And someone will have to decide which of these is correct, as the staff at the station (as well as the local authorities) in Bareilly do not seem to be sure:

It was indeed named after a British railway manager named Charles Izat, though somehow it morphed into Izzat over the years. Interestingly, both names are seen on signs in the locality.