We now look at the converse: a fifty-plus and ten wickets in an innings in the same match.

Multibaggers are rarer here. We have 3 instances by Sir Richard Hadlee and 2 by Shakib Al Hasan. That’s all. Botham is here, but only for one instance. Ashwin, Sobers and Mushtaq are not here. But there are others such as Bevan and Border who would not usually be considered to be all-rounders.

The most recent instance was by Stuart Broad during one of the Covid Tests of 2020.

Earlier we saw that Bruce Taylor was the only one to score a century and take 5wi on debut. That was against India in 1965.

There is only instance of someone scoring a 50+ and taking 10 wickets on debut. This was John Lever for England v India in 1976. What is even stranger is that India’s S Venkataraghavan appeared in both of these Tests.

Among current and recent players there are MM Ali, SCJ Broad, RA Jadeja, Dilruwan Perera, Rashid Khan, Shakib Al Hasan and DW Steyn. The only other player from India is Kapil Dev (who never made a century and 5wi together).

Hope that you have read Part 1.

We proceed to individual performances in

Kumble has the most 5-fors (10) followed by Harbhajan, Lyon and Kapil with 7.

Jasu Patel’s record stands for over 60 years. However, there was no instance of 7 or more wickets in an innings during this series.

No bowling effort from this series makes this list either. Among current players, Ashwin and Lyon have 12-fors. Note Krejza’s 8wi and 12wm on debut. But his career ended after another Test.

Benaud and Nadkarni have the best economy rates.

McGrath and Jadeja have the best strike rates.

Led by Gilchrist and Dhoni, while Paine and Pant have the most among current players.

The most catches by non-keepers are 46 by Dravid and 36 each by VVSL and Ponting.

Most dismissals in an innings (5 and more):

Paine made 5 dismissals at Adelaide during this series, although had taken 6 and 5 at Adelaide in 2018-19. There is also the 5 catches by Srikkanth in 1991-92, making him one of the non-keepers to share this record.

Most dismissals in a match (6 and more):

It may be hard to believe, but Pant holds the record with 11 dismissals at Adelaide in 2018-19. Haddin and Dhoni are next with 9. Among the non-keepers, Whatmore and ME Waugh have 6 catches.

Kapil clearly leads here, while the next three have the difference considerably worse than those of recognized all-rounders.

Surti and Cummins have the best performances, although their teams lost those matches.

For some unknown reason, this post in Dec 2015 was the most popular of my cricket-related posts and got over 700 views in that month.

The first question we asked was “Who is the best opening bowler of the 2010s?”

You may have thought of someone like Steyn or Mitchell Johnson or Morkel.

In Dec 2015, R Ashwin had the best average, BW Hilfenhaus the best economy rate, and Ashwin again with the best strike rate.

When we consider the entire 2010s: 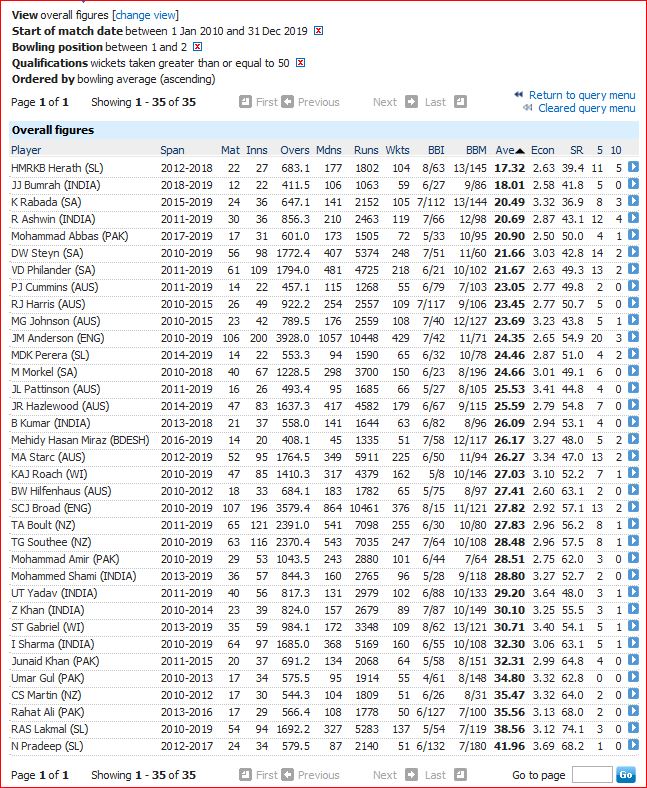 There is another unexpected result with the burly Rangana Herath having the best bowling average here. He is followed by Bumrah (expected) and Rabada (also expected). Ashwin is 4th.

Other spinners here are MDK (Dilruwan) Perera, and MH Miraz.

This time Mohammad Abbas has the best economy rate and K Rabada the best strike rate.

Next, who is India’s best opening bowler? Surely Kapil or Srinath?

In 2015 we got Ashwin again (followed by Srinath and Kapil). Phadkar had the best economy rate and Ashwin the best strike rate. 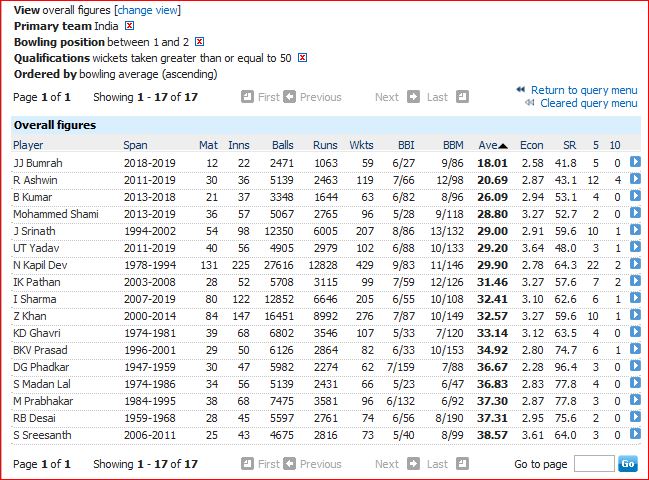 This time Bumrah leads, followed by his contemporaries Ashwin and B Kumar. The first 4 places are held by current players.

Phadkar still has the best economy rate and is now followed by Bumrah. Bumrah has the best strike rate while Ashwin is second.

Finally, who was India’s best all-rounder? We consider all those who scored at least 1000 runs and took 100 wickets up to the end of 2019.

In 2015, it was Ashwin followed by Kapil and Pathan.

In 2020, the topper was not Ashwin but one of his contemporaries. 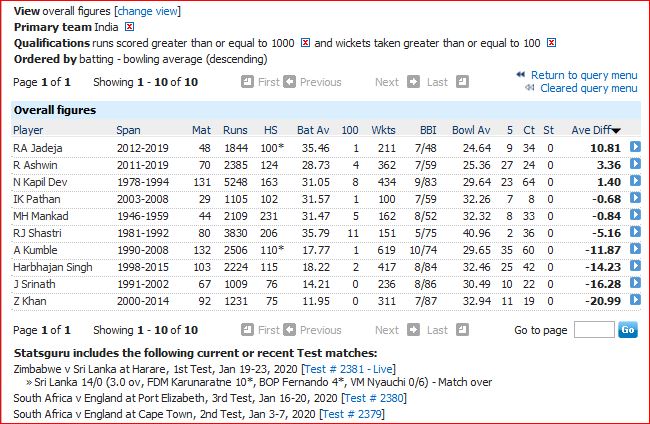 Indeed, this is led by Jadeja who is followed by Ashwin and Kapil. Of course, anyone below Shastri in this table should not really be called an all-rounder.

Finally we look at all-round performances. For overall performances we have this (see the criteria):

Even by these modest standards we only get two who meet the criteria of all-rounders. Jadeja has clearly done better than Stokes, although the latter is more likely to make an impact.

Match performances: Fifty and fiver in the same match:

Here we have two contrasting performances. While Chase was largely responsible for an unexpected WI win, Rashid Khan’s criteria was the best all-round performance from Afghanistan in a Test. He was also the captain.

Hope that you have seen part 1.

We now proceed to Bowling: 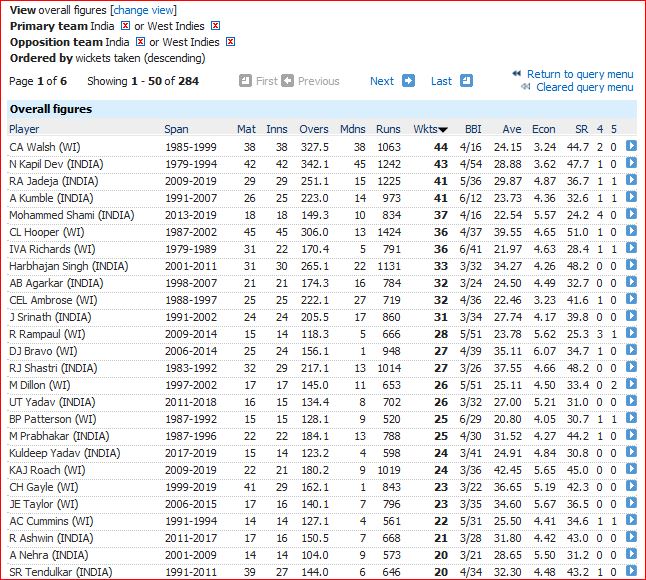 “Sir” Jadeja is set to become the leading wicket-taker here, although Shami is following him closely

M Dillon is the only one with two 5-fors, although Shami and Rampaul have the most 4+ hauls (4).

Best innings bowling (including all cases of 5 and more wickets): 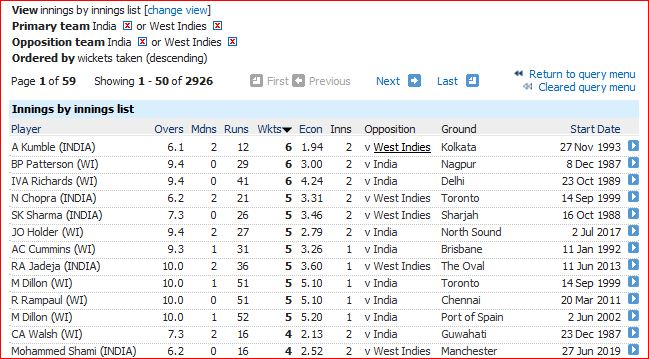 The first few innings bowling figures are from long ago, with Viv Richards having one of the best analyses. He did take a few wickets in Tests as well, but not more than 2 in an innings. The best in 2019 was by Shami during the World Cup. 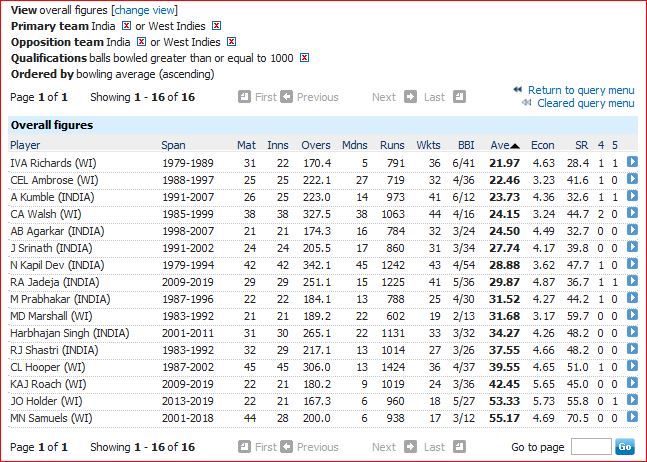 Surprisingly the best average is by the occasional bowler Viv Richards, though he is closely followed by Ambrose. Jadeja, Roach and Holder have the best averages among current players. 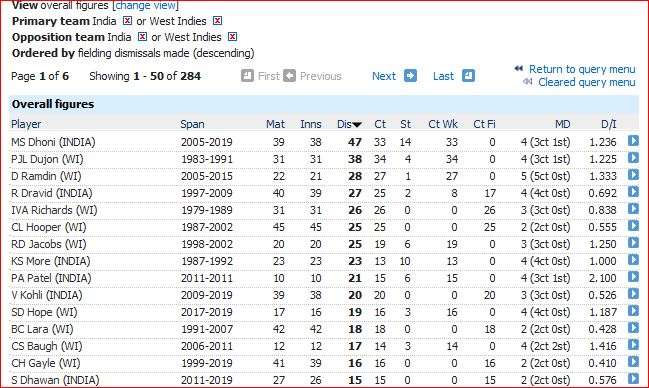 Dhoni has the most dismissals (47), although Dujon took more catches (34) than him. Dhoni does however have the most stumpings (14). Richards (26) and Hooper (25) have the most catches by non-keepers.

Ramdin is the only one with 5 dismissals. Dravid has the most (4) catches by a non-keeper.

Ramdin leads here, while Richards has the best rate among non-keepers.

Led by Richards (!) followed at a distance by Hooper and Kapil. 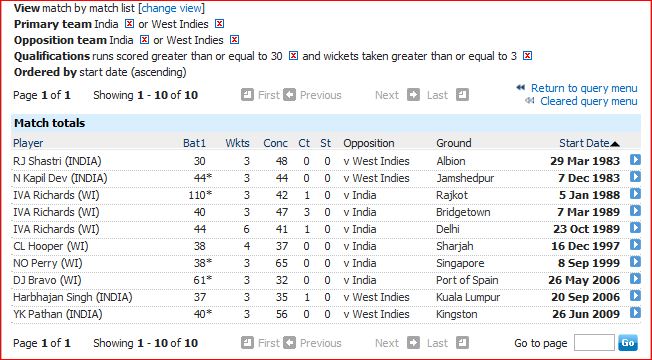 Richards again in his unaccustomed role as an all-rounder. The best performances here would be by him in Jan 1988 and Oct 1989. Also one by Hooper.

The 3-match series in India was won by India with  2-1 margin. Earlier this year India had won 3-0 in a series spread over the USA and West Indies.

Here is a summary of the 17 T20I matches between these teams: 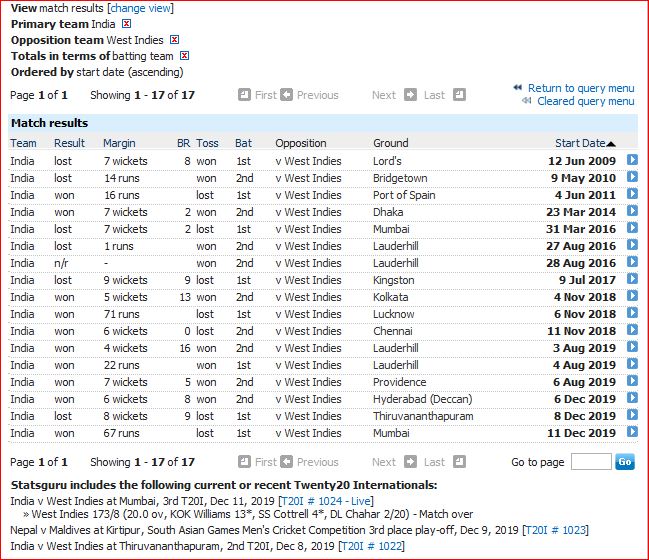 These can be summarized as: 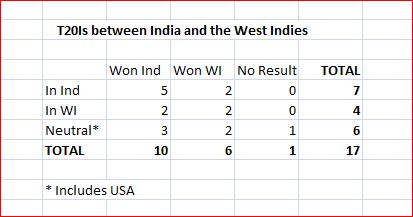 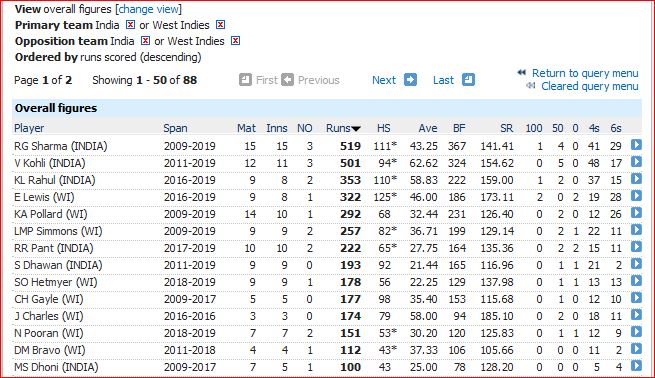 The trio of RG Sharma, Kohli and Rahul have the most runs. While E Lewis is the only one with 2 centuries, Sharma and Kohli each have five 50+ scores.

Highest innings (75 and above):

Kohli and Rahul scored 90s in this series. 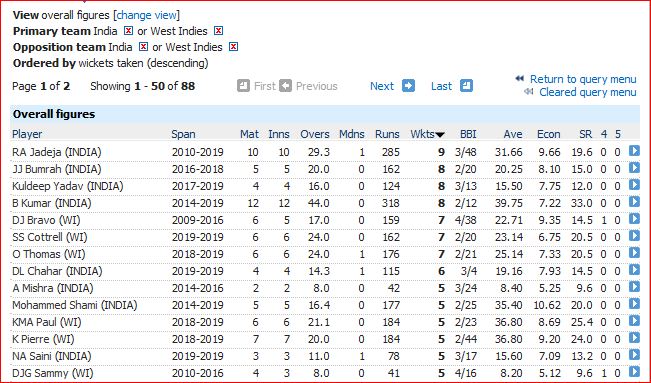 Jadeja leads now, with K Yadav and B Kumar from the current series.

None of these performances are from the current series. But note DL Chahar’s 3-4 from earlier this year.

Fielding: Most dismissals (4 and more):

RG Sharma has the most catches followed by Pollard. Dhoni, Pant and Ramdin have the most dismissals as a keeper.

KD Karthik has the most dismissals by a keeper.

Bravo’s performance in the 2009 World Championship is one of the best in all T20Is.

We now move to Bowling Records: 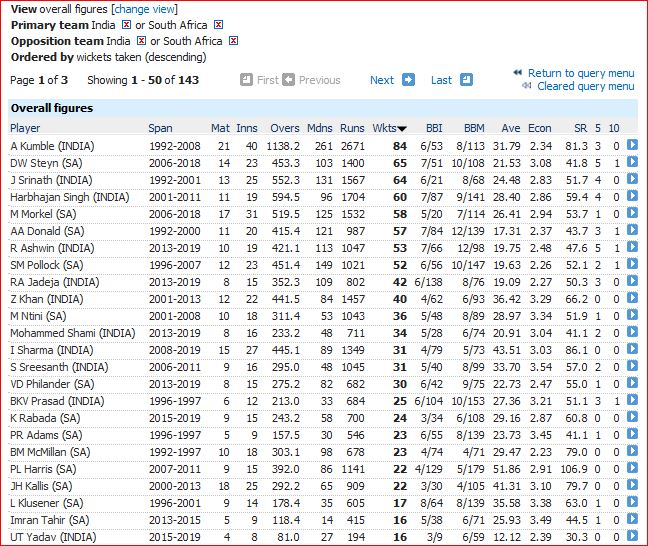 The most wickets by current players are 53 by Ashwin and 42 by Jadeja.

The most 5-fors are 5 by Steyn and Ashwin. No one has taken more than one 10-for.

Best innings bowling (all instances of 6wi and above): 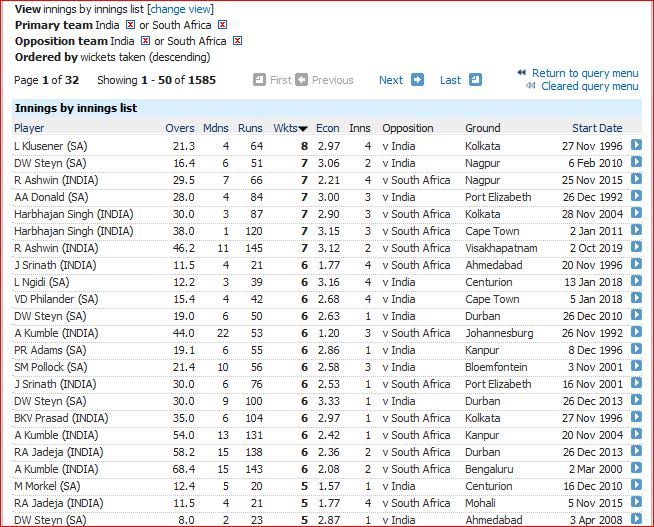 Best match bowling (all instances of 8wm and above): 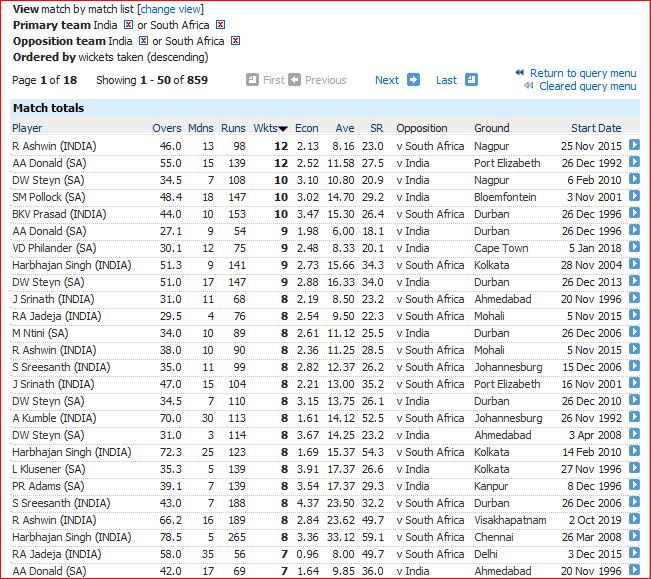 Again, the only instance from this series is from Ashwin with 8-189. 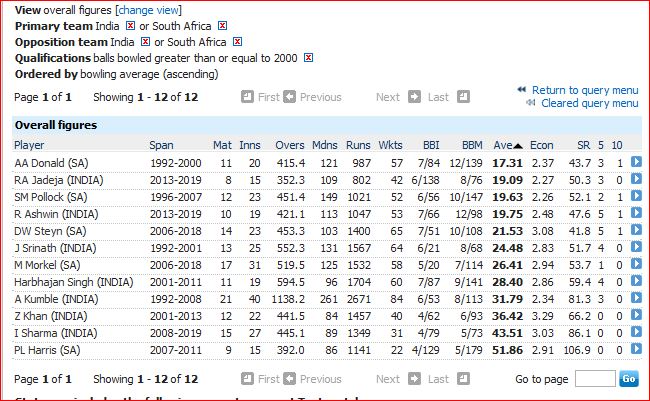 The best bowling averages are by Donald and Jadeja, the best economy rates by Pollock and Jadeja and the best strike rates by Steyn and Donald. Also note that the best averages for Indian bowlers are by the current players Jadeja and Ashwin.

Most dismissals (12 and above): 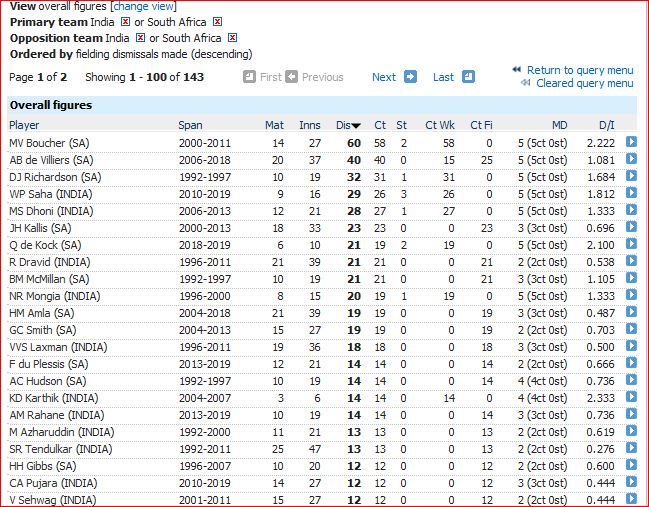 Most match dismissals (6 and above): 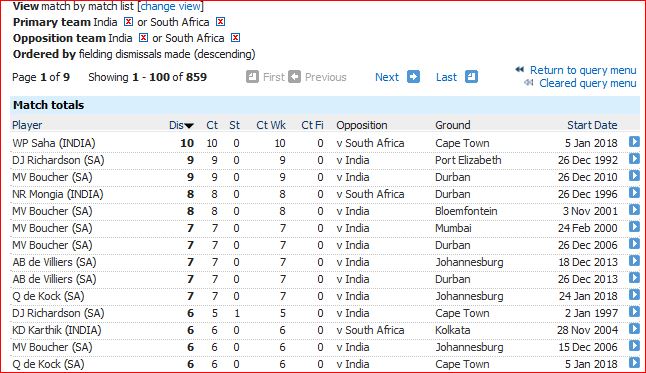 Saha has the record of 10. No fielder has more than 6. 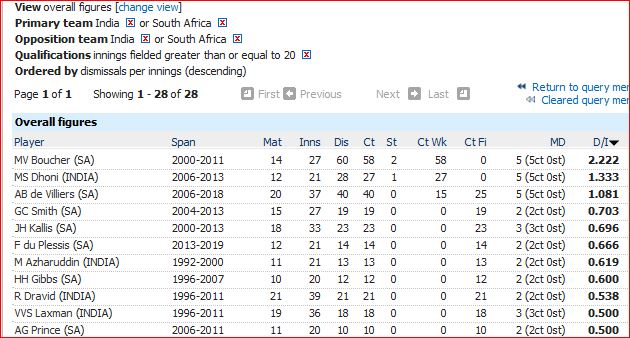 Boucher’s dismissal rate is far ahead of the others, followed by Dhoni. Among fielders, the best is by the “hybrid” de Villiers followed by GC Smith. du Plessis has the best among current players.

The only genuine all-rounder here is Pollock. Kallis does not seem to have bowled much against India.

On expected lines, though one might expect to see Kallis and Jadeja. The lesser-known Boje has the best performance here.

Ishant Sharma’s heroics and his maiden Test fifty reminded us of the importance of having tailenders who can score some runs. Or, failing that, at least stay around long enough for other batsmen to score some more runs. Ishant was perhaps more of the second type.

We have a quick look at the best performers at 8-11 in the three formats. 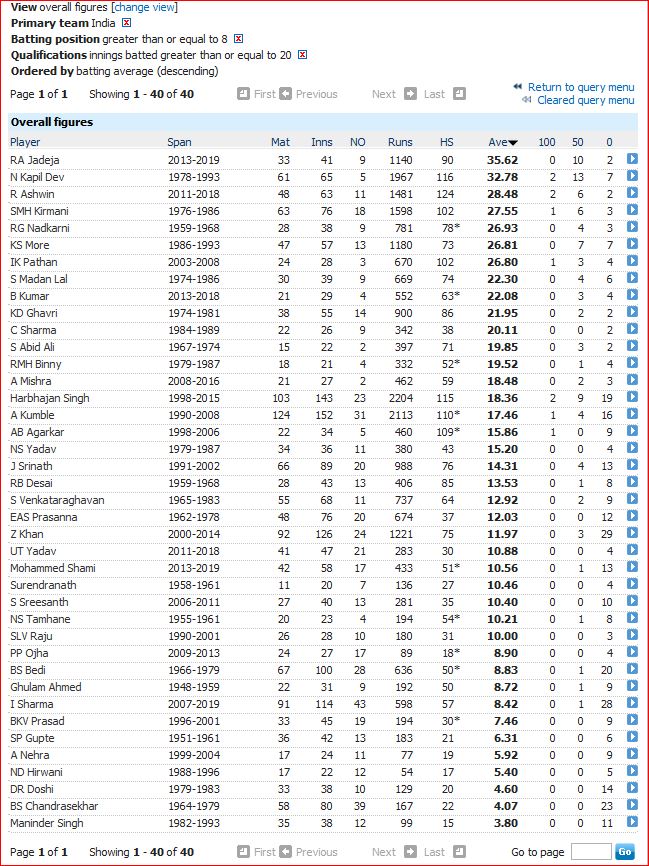 RA Jadeja’s average is now above Kapil Dev’s. Remember that both of them and a few others like Nadkarni scored centuries up to No 7 as well.

Kapil, Ashwin and Harbhajan have two centuries here. Others with centuries are Kirmani, IK Pathan, Kumble and Agarkar.

Here Agarkar has the lowest average by a century-maker and Ishant the lowest by a fifty-maker.

The lowest average here is by Maninder Singh, followed by Chandrashekhar and Doshi which most would have guessed.

In ODIs, we have: 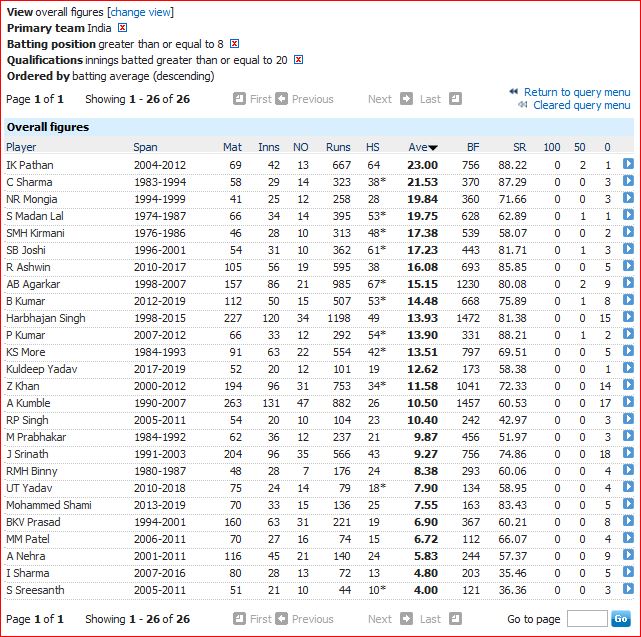 The highest averages are by Pathan and Chetan Sharma. Sharma has scored a century batting lower.

Pathan and Agarkar are the only ones here with 2 fifties. The lowest average by a fifty-scorer is by Praveen Kumar.

The lowest average is by Sreesanth, followed by Ishant Sharma and Nehra.

For T20Is, no one has 20 innings so we take the cutoff of 10 innings instead.

Ashwin and Harbhajan are the only ones who qualify here. Neither has scored a fifty.

Continuing the pretense of the IPL:

* No further part in the World Cup.