Now let use see about the highest strike rates for innings lasting for one to six balls.

There is no record of anyone scoring more than a zero off zero balls, though it may be theoretically possible under some obscure rule.

Here you have only 0* and 0, the latter being diamond ducks.

There is only one such innings involving a six, and it is fittingly by Jayasuriya with an SR of 600. Next is Ishant Sharma with 5 (a single plus 4 overthrows) and 500. Then there are those who scored a 4 or 3 off one ball. Ishant Sharma appears again. At least half of the batsmen here are tailenders. Even the famous batsman CS Martin has scored 4 off one ball! So has NM Lyon.

There are four batsmen (all tailenders) who have made 7 off two balls. They would have made a 6 and a single, apart from Muralitharan who made a 4 and a 3. Then there are 6s and 5s. Here we do not meet a recognized batsman until Sir Richard Hadlee (?) and AL Logie. The only current players are Wafadar of Afghanistan and India’s Mohammed Shami. 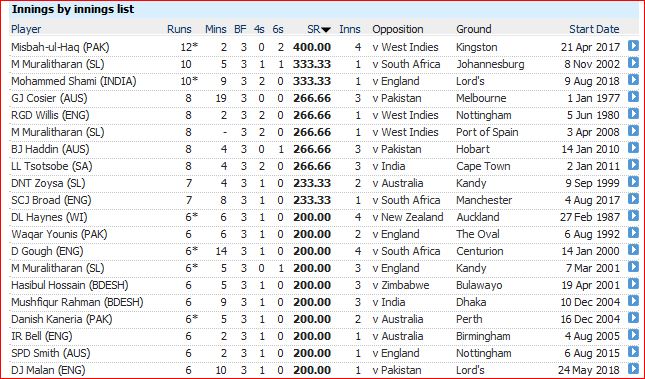 The highest off 3 balls is 12* by Misbah, including two sixes and a dot. Murali has 6,4 and dot while Shami has two fours and a two. Others have made 6 runs with one four. Muralitharan appears three times here. The proportion of recognized batsmen is more here, including current players Mushfiqur and Malan along with Shami.

The maximum here is 12, either by 3 fours (de Villiers and Warner) or 2 sixes (Henry). Warner, Henry and M Marsh represent the current players. 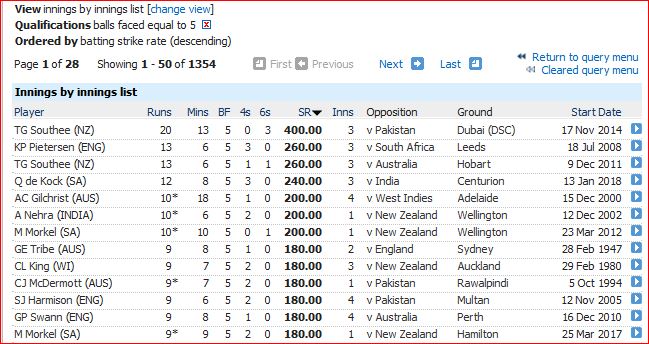 The best here is by Southee (another expert tailend slogger) with 3 sixes in his 20. He has also made 13 to be in second place with Pietersen.

Having come so far, we can also see

Kapil’s 4 successive sixes came when averting the follow-on with No 11 at the other end. The No 11 (Hirwani) was out just after the follow-on was averted. There are numerous current players here (such as Southee) besides old-timers such as Hammond.

All 6 balls by Jayasuriya, Sarwan and Gayle (although Sarwan had a no-ball interspersed after 4 sixes. DW Hookes hit 5 fours on his debut, which came in the Centenary Test of 1977. So did RE Redmond, a staple of quiz questions.

At close on the Oct 10, 2019, which was the first day of the second India-SA Test at Pune, South Africa was yet to bat.

So Senuran Muthusamy temporarily holds the record of the most runs in a Test career without ever being dismissed:

Azhar Mahmood scored 128* and 50* on debut and thus scored 178 without being dismissed. He added another 19 in his third innings before he was dismissed for the first time.

JA Rudolph scored 222* on debut, and 71 in his next innings in his second Test.

The above table shows those with short careers who finished with no dismissal. SG Law scored 54* in his only innings, while his fellow debutant Ricky Ponting (96) went on to better things.

There are a few there who played in 3 Tests. However, the real achievement was that of Aijaz Cheema:

We now move on to the related topic of the highest batting averages. Most statistics sources such as Cricinfo give this with a cutoff of 20 innings, as in this:

But what if we do not have  a minimum number of innings? After Muthusamy and his unbeaten friends, we get:

Highest batting averages (with no minimum number of innings):

This is headed by current players KR Patterson and PP Shaw who are expected to play Tests in the future. Next is AG Ganteaume with his average permanently stuck at 112.00. Only then we have Bradman’s 99.94, followed by a couple of 1-Test players in the 90s.  Further down we have SPD Smith (64.56) and AC Voges (61.87).

A total of 105 batsmen have made a century on debut. They have accounted for 107 centuries (since LG Rowe and Yasir Hameed scored two centuries on their debuts).

But 40 of them never scored a century again (including Yasir Hameed). Two of them played only one Test (AG Ganteaume and RE Redmond) and many had short careers. Some had longer careers and made several fifties but no centuries. The complete list is: 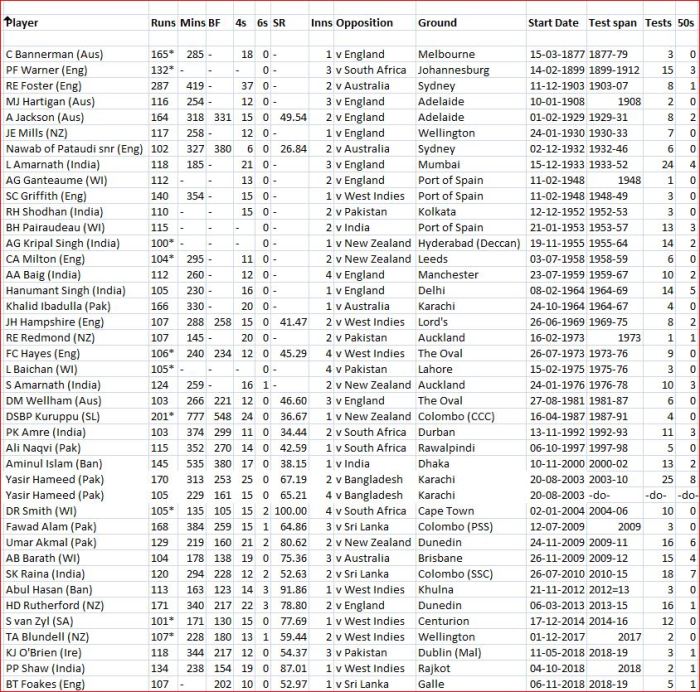 Apart from the luckless 1-Test players, many played for one or two series only.

C Bannerman’s century in the first ever Test is well known.

Note the father and son combination of L Amarnath and S Amarnath. The other son M Amarnath had a less successful debut but ended up as a leading batsman with several crucial centuries.

Aminul Islam and KJ O’Brien emulated C Bannerman and made centuries in the first Tests of their countries.

The bottom 4 (from Blundell onwards) are likely to play again. Some Pakistan fans feel that Fawad Alam has a chance of playing again although his last Test was in 2009.

The highest scorer here was RE Foster with 287 (which is the highest score on debut and was the Test record until A Sandham made 325 over a quarter century later). The only other double century is by Kuruppu (201*) Next are HD Rutherford (171), Yasir Hameed (170) and Fawad Alam (168).

Then there was the “Indian jinx”. It stemmed from the fact that for a long time, ALL Indian players who scored a century on debut never scored another. Namely:

One could also include the senior Nawab of Pataudi who played first for England and then for India.

GR Viswanath made a century on debut in 1969 and then a second one in 1973, thus ending the jinx.

Ultimately, 15 Indian players (not including the senior Pataudi) made a century on debut. Those who made centuries after their debut were Viswanath, Azharuddin, Ganguly, Sehwag, Dhawan and RG Sharma.

Those who missed out include the 5 listed above as well as S Amarnath, Amre, Raina and Shaw (although the last is likely to play again).

Then there are the tragic cases of those who never scored even a fifty after their debut. (RE Redmond is an exception as he scored a century and a fifty in his only Test. His son AJ Redmond played 8 Tests with two fifties and a top score of 83.)

For a short time between the second and third Tests in the current series, KL Rahul shared an obscure Test record with Ravi Bopara-they were the only batsmen to make 3 Test centuries with no fifty (i.e. no score between 50 and 99). As Rahul got out on 50, the record now goes back to Bopara. More details in my earlier post: https://wordpress.com/post/abn397.wordpress.com/2052

As we see, there are numerous players who scored one century and no fifty (including Agarkar and Ratra from India in recent years). A small number made two centuries and no fifties.

No one has scored 4 or more centuries with no fifties. The least number of fifties for the 4-century men is 3, shared by several including Shikhar  Dhawan, Kambli and  current players Dean Elgar and Usman Khawaja:

There is another statistical quirk which shows up whenever someone makes 163 or more runs on his debut (including both innings). The long-term record for the most runs in an one-Test career belongs to RE Redmond who made 107 + 56 = 163 in early 1973. Since then, over 20 players had scored over 163 runs on their debut and this held the record for the most runs in an one-test career (but only until they played their second Test). Another Kiwi JD Neesham was the last to hold this record, making 33 and 137* (170) on his debut against India in early 2014. But he soon played more Tests. Before that there was Rohit Sharma with 177 and Shikhar Dhawan with 187. Here is a list of the temporary record-holders who equalled or bettered Redmond’s record since 1973:

A few of these players, notably those from Pakistan, vanished from the scene almost as quickly as the hapless Rodney Redmond did. At least he had the satisfaction of seeing his son Aaron play 8 Tests, with two fifties and a top score of 81.

There are many unfortunates who got a chance to play exactly one Test (or ODI or T20I). Some of them did well enough to deserve more chances but somehow this never happened. We look at the batsmen who made the most of their chances in limited Test opportunities, and then in ODIs and T20Is.

Scoring at least one fifty in their only Test:

Of these, only Redmond scored a hundred and a fifty, and Ganteaume scored a hundred. SC Cook played his only Test so far in 2016 and should get off this list soon. Ronchi is the only one to score over 100 runs without a century, while three others scored over 90.

There are various reasons why they did not play again. Eyesight issues were the main reason for Rodney Redmond not playing again. His son Aaron Redmond played 8 Tests in recent years with a top score of 83.

Zulqarnain Haider stopped playing for Pakistan under peculiar circumstances. Cook and (perhaps) Ronchi should play again. India’s sole representative the Yuvraj of Patiala (also known as Yadavindra Singh) dropped out of cricket to concentrate on politics, though he might well have captained India in the 1936 tour of England where he would certainly done better than Vizzy. His son Amarinder Singh is still active in the politics of Punjab state.

Scoring at least 50 runs in their only Test: 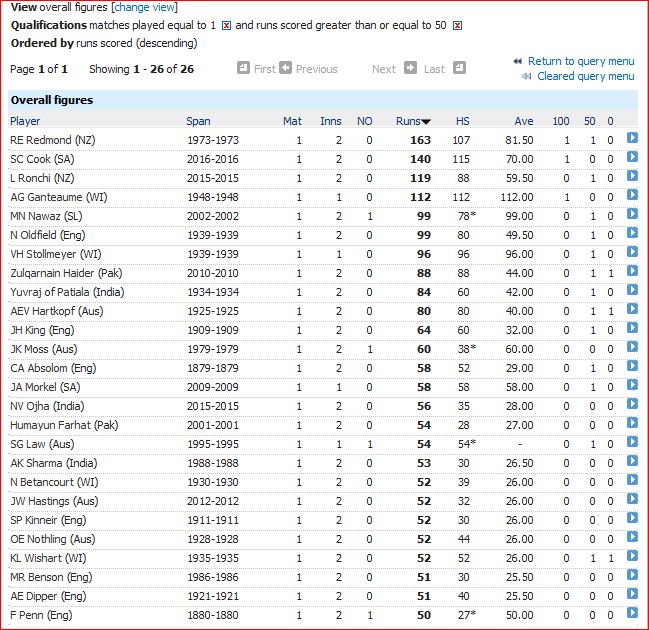 This includes a few others who made 50 or more runs without a fifty. The highest total among these is JK Moss with 60. There is also Humayun Farhat, who did score 54 runs in his only Test but also became the only wicket keeper who did not make a single dismissal in his career. (There are some other keepers who did not make any dismissal on their debut).

Scoring at least fifty in their only Test innings:

Ganteaume and Stollmeyer lead here. Albie Morkel probably deserved to play a few more Tests, but is now unlikely to get another chance. And McGirr played his only  innings in his 2nd and last Test, as he did not get to bat on his debut. Law is the only one in these tables to remain unbeaten in his short Test career. His fellow Australian debutant RT Ponting went on to bigger things.

30 or more runs in their only ODI: 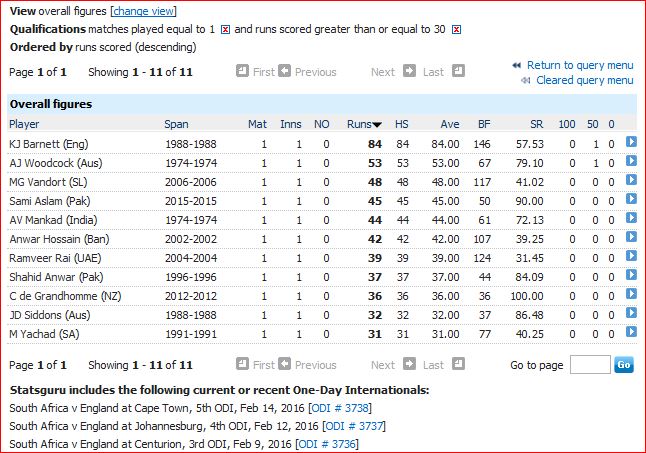 Barnett and Woodcock are the only ones to score fifties, though there are several others close behind. Some of them were moderately successful in Tests, such as AV Mankad.

30 or more runs in their only ODI innings:

India’s lesser-known S Badrinath has the highest score here. Dinesh Mongia’s only T20I was India’s first. Some prominent Test and ODI players such as Dravid, Ganga, Gillespie and North find a place here, along with the hapless Reifer who was once asked by journalists “Are you smoking something which sounds like your name?”. This was at that the time he captained a West Indies C Team which gave Bangladesh its first two Test victories away from home.

We get exactly the same result.

To be continued with bowling, fielding and all-round performance in their only match or innings.