There are relatively few “pure” bowlers who had extended runs as captains. This is an attempt to list them: 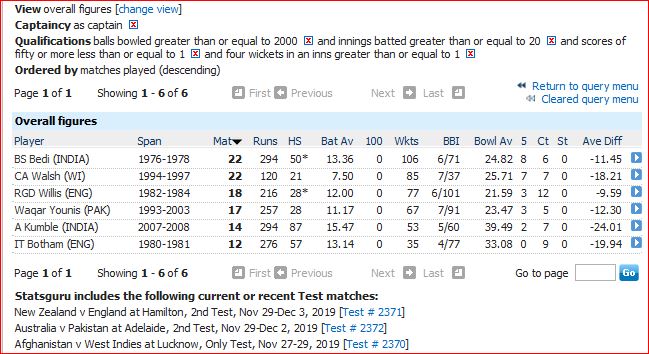 Botham did not do well as a batsman or bowler (or indeed as a captain) during his tenure.

Willis also holds a record of taking the most wickets (325) without ever taking a 10-for. These are the bowlers with this distinction with 200 or more wickets: 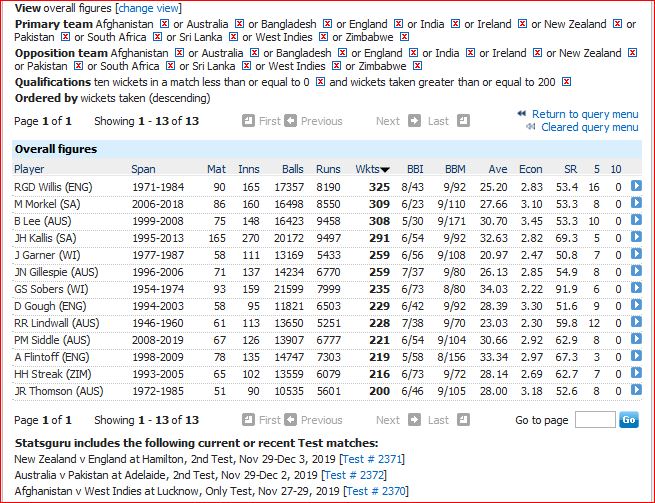 While Siddle may play a few more Tests, he is unlikely to come close to 325 wickets. Morne Morkel and Brett Lee may have surpassed this after a few more Tests if they had not retired.

For comparison, we see who has taken the most wickets without ever taking a five-for:

While Hendrick was certainly a specialist bowler, most of the others here were considered all-rounders. Some were batsmen who bowled occasionally. We can see that NJ Astle has the most wickets without a 4-for.

And finally, he may be one of the few cricketers who legally changed their name to that of someone whom he admired. However, Bob Dylan outlived him. (He is only 8 years older than Willis).

Willis was not much of a batsman, with a top score of 28* and  career Test average of less than 12. He normally batted at No 10 or 11. However, he normally did stay long enough to help other batsmen to add more runs. The best such instance was in this Test in 1980:

England made 370 and the West Indies 265 in reply. In the 3rd innings, England collapsed to 92/9 when Willis came in to join Willey (who was not considered to be an established batsman at that time; he had two fifties with a top score of 62* at that time). So England led by 197 with 3:30 hours left, and surely the West Indies would make light work of a target of around 200. But this did not happen. Wisden 1981 had this to say:

“At The Oval, July 24, 25, 26, 28, 29. Drawn. Considering a complete day was lost to the weather, that only 29 wickets fell, and that West Indies averaged 12.3 overs an hour, the fourth Test was a much better match than it might have been. Its main features were Gooch’s tremendous attacking 83 which inspired England’s best batting of the summer, a West Indian collapse that put them in momentary danger of a follow-on, and an unbroken last-wicket stand of 117 between Willey and Willis that saved England from defeat.

How England came to be 92 for nine in their second innings after making 370 in the first is something that requires no explanation to anyone familiar with the brittleness of their batting, or with the potency of Holding, Croft and Garner. When Willey and Willis came together a West Indian victory looked likely with England only 197 ahead and with three and a half hours left. Yet they played with exemplary coolness and courage, and after a surprisingly short time showed no sign of being parted.

West Indies were badly handicapped by injuries to Croft and Garner, but Holding and Marshall were still relatively fresh when the ninth wicket fell twenty-five minutes after lunch. Willis’s 24 not out equalled his highest score in 80 innings for England and followed a sequence of ten innings in which he had only once reached double figures. Sadly, because of his lost bowling form, it proved to be his last Test innings of the season.

For all that was owed to the ungainly effectiveness of Willis’s lunging forward stroke, it was to Willey that England were mainly indebted for survival. Ironically, he would not even have been playing had Greenidge caught him at 13 in the Old Trafford Test a fortnight earlier – an escape which enabled him to add 62 not out to an aggregate of 90 in his ten previous innings for England. It was to his reputation as a fighter that Willey owed his continued presence in the side, and at The Oval he justified the selectors’ faith in him. Arriving at 67 for six, thirty-five minutes before lunch, he showed the full face of the bat to the West Indian fast bowlers from the moment he came in. He held concentration and resolve as Botham, Knott and Dilley were briskly swept aside, resourcefully protected Willis from the strike and, when the West Indian effort faded, availed himself of a well-deserved first hundred.”

While this was not noticed at the time, it was the first time that a 10th-wicket pair succeeded in doubling the score (from 92/9 to 209/9). This happened after over a hundred years of Tests, and has indeed happened only on 6 occasions from 1980 to 2019 as detailed here: