After team performance, batting and bowling we come to fielding. 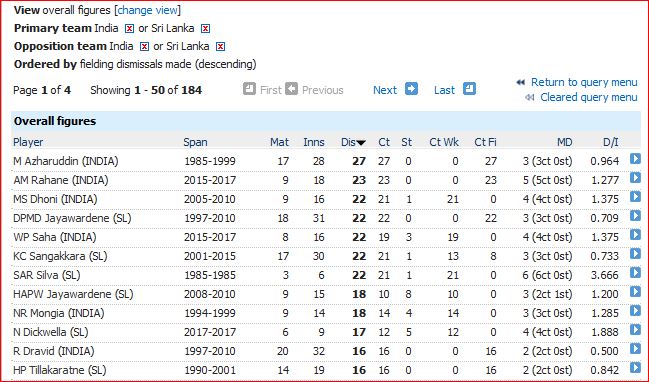 The topper is a bit of a surprise, but then he played more Tests in the series than most other prominent players. Among keepers, the most dismissals are by Dhoni, Saha and SAR Silva (22). Silva played only in 3 Tests between these teams. Note that Sangakkara played both as keeper and non-keeper.

Innings dismissals (4 and above):

SAR Silva again. Saha has 4 catches during the current series. Rahane’s 5 catches as a fielder gives him a share of the world Test record

Match dismissals (6 and above):

These results are unsurprising, as Dhoni and some other prominent players did not play enough Tests between these teams.

Finally we take up all-round performances:

Overall (see the criteria from the table):

Even with these relaxed criteria, the only genuine all-rounder here is found to be Kapil. Murali scored his only Test 50 against India. Similarly two of Herath’s three fifties were against India.

Note Malinga’s only Test fifty, as well as Ashwin and Jadeja both achieving this in the same match.