Win-Loss ratios for all teams:

This isn’t very useful as the Netherlands and Namibia come out on top.

The ICC rankings on Dec 31 are more meaningful:

Here we have the four semi-finalists of the World Cup at the top.

Next we move to the individual performances, starting with 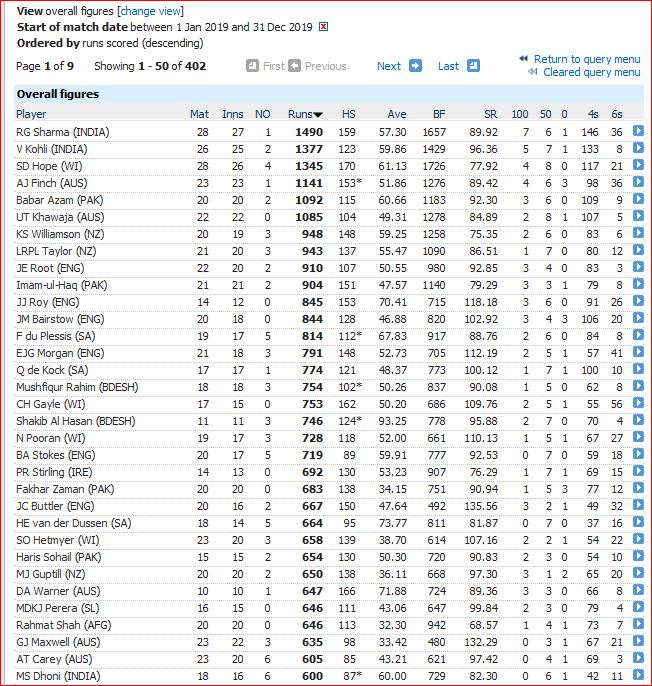 Sharma has the most centuries (7) followed by Kohli (5). 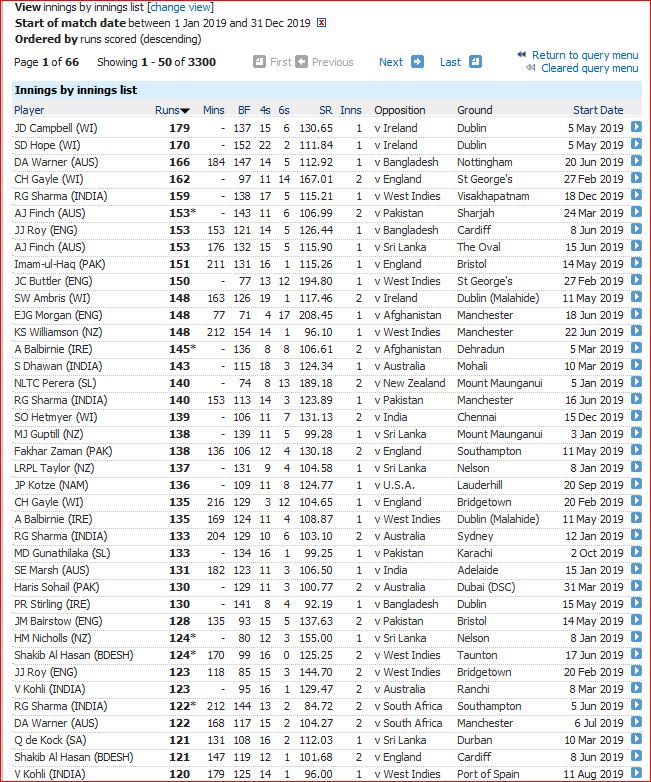 Led by the relatively lesser-known JD Campbell. There are several other scores above 150. 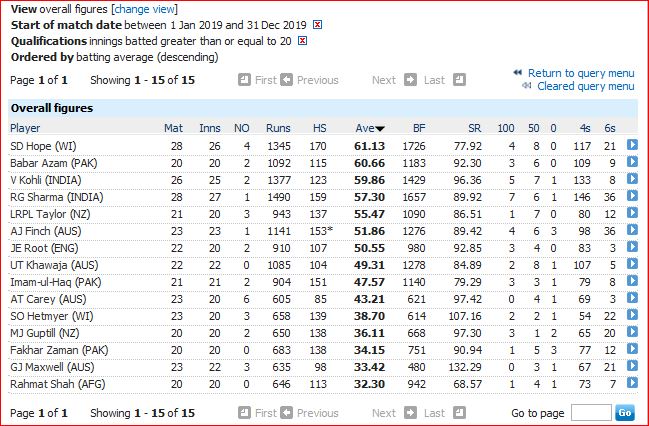 Hope, Babar Azam and Kohli are close together at the top.

Here we have some other names at the top such as JJ Roy, who is considerably ahead of EJG Morgan. While Kohli is here, others who scored the most (RG Sharma and SD Hope) did not score fast enough. There is one player (N Zadran) from Afghanistan.

A few other points of interest from the main table: http://stats.espncricinfo.com/ci/engine/stats/index.html?class=1;filter=advanced;opposition=1;opposition=2;opposition=25;opposition=29;opposition=3;opposition=4;opposition=40;opposition=5;opposition=6;opposition=7;opposition=8;opposition=9;orderby=start;qualmin1=2;qualval1=hundreds;size=100;spanmax1=25+Oct+2019;spanval1=span;team=1;team=2;team=25;team=29;team=3;team=4;team=40;team=5;team=6;team=7;team=8;team=9;template=results;type=batting;view=match

CAG Russell (1923) made centuries in each innings in his last Test.

These players made their only two centuries in the same Test:

Hope is the only current player and may add to his tally of centuries.

PA da Silva (SL) is the only one with unbeaten centuries in both innings (1997).

Apart from those listed above, these players made their first two centuries in the same Test:

While Sachin Tendulkar has scored the most centuries (51), he never made centuries in both innings. His immediate followers Kallis (45) and Ponting (41) have done so.

25 or more Test centuries without ever making a century in both innings:

Here we look at individual batting performances for the calendar year 2017. 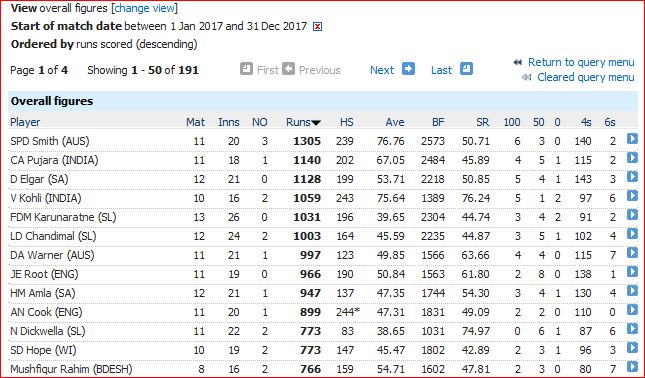 SPD Smith and five others crossed 1000. Smith had the most centuries (6) followed by Elgar and Kohli with 5.

Smith also had 9 scores of 50-plus, which was attained by several others. But it is his Ashes counterpart Root who has 10 such scores. KL Rahul (who scored less than 750 runs and does not appear above) had 9 scores of 50+ with a top score of 90. You can also see Dickwella who failed to convert any of his 6 fifties.

Also Elgar has the most 4s (43) and Warner and Mushfiqur the most 6s (7) in the above table. A closer look shows that de Grandhomme (15) actually had the most 6s though he scored only 293 runs.

Highest individual innings (150 and above):

The highest score was 244* by AN Cook practically at the end of the year, while he and Kohli also made 243. Cook’s 244* is the first Test score at that number (though Bradman was once dismissed on 244). This 244* is also the highest score by anyone carrying his bat through an innings, surpassing GM Turner’s 223* in 1972.

Although Pujara and Kohli scored over 1000 runs they batted in less than 20 innings, so they do not appear here. So we have SPD Smith heading this table with Elgar a distant second.

Here we have Kohli closely followed by Dickwella, with Smith considerably behind.

Two centuries in a match:

Only one instance. They were Hope’s maiden centuries, and enabled the West Indies to win a Test in England for the first time since 2000.

Next we will take up bowling.

Scoring centuries in each innings of a Test is not too rare. It has been done on 82 occasions. Three have achieved this in three Tests: Gavaskar, Ponting and Warner. And several others have done it twice. You can see the full list here:

The first to achieve this was Warren Bardsley in 1909, and the most recent was Shai Hope in his team’s unexpected victory at Leeds.

Bardsley and Hope are among the few who scored their first two centuries in the same Test. We look at these in more detail:

The 11 instances are listed above, along with some points of interest.

As mentioned above, Bardsley was the first to score two centuries in the same Test.

Moroney, Wasti, Yasir, Fulton and now Hope made their only two centuries in the same Test. And Hope is the only one who is likely to play more Tests.

Rowe and Yasir scored two centuries on debut. The latter never made any other centuries. Rowe was the third (after KD Walters in 1968-69 and SM Gavaskar in 1970-71) to score a century and double century in the same Test. Since then others have also achieved this, with Gooch and Sangakkara going further with a single and triple.

Mendis’s twin 105s represent the highest amongst identical scores made in each innings of a Test. There is also Misbah with 101 and 101*, which are not quite identical.

If you check with Statsguru, you will find that CAG Russell (Eng v SA in 1922-23) is the only one who scored two centuries in his last Test. Technically this applies to Hope as well at the time of writing, but he can hope to play many more Tests.

The selectors certainly had faith in him as he crossed 40 for the first time in his 7th Test and 50 in his 9th Test (though he got up to 90 that time).

Tail piece-incredible as it may seem, no one else had scored centuries in each innings of a first-class match at Leeds-not Bradman, nor Yorkshire stalwarts such as Sutcliffe, Hutton and Boycott.

“Is it true that Shai Hope was the first to score two centuries in the same match at Headingley? asked Brian McKenzie from Barbados
Remarkably, it is correct: in scoring 147 and 118 not out in his first match at Headingley, Shai Hope achieved what no one else had managed in 533 previous first-class matches on the ground. Yorkshire greats like Herbert Sutcliffe and Geoffrey Boycott played 61 and 59 times at Headingley respectively, but never managed two hundreds in the same game. Hope, of course, was nearly pipped to the honour by Kraigg Brathwaite, who followed his first-innings 134 with 95 in the second. According to the BBC scorer Andrew Samson, the ground that has now staged most matches without anyone making twin centuries there is Weston-super-Mare, with 191.”