Here we look at captains with no wins, no losses and no draws.

These are captains in 4 or more Tests with no wins.

Headed by M Ashraful of Bangladesh with 13 (12 losses and 1 draw). The next (IT Botham) is more surprising. Another Bangladeshi Khaled Mashud also has 12.

In recent years there are AG Cremer (8) and KC Brathwaite (5).

From India there are MH Mankad (6), S Venkataraghavan (5) and others with 4.

These are captains in 2 or more Tests with no losses.

WW Armstrong with 10 heads this list, with 8 wins and 2 draws.

Next are DB Close and FG Mann with 7.

In recent years there is only AM Rahane with 2; both of these wins were when he was standing in for Kohli.

From India we also have Srikkanth with 4 (all draws).

These are captains in 3 or more Tests with no draws.

Others from recent times (other than Shakib) include R Herath, KC Brathwaite and RAS Lakmal with 5.

Brathwaite has 5 losses out of 5.

From India there is DK Gaekwad with 4 (all losses). He is presently India’s oldest living Test player.

There are unlikely to be any Test matches for a few months. So it is time to catch up with statistical details which are not readily available to to the average cricket follower.

Today we have bowling records for captains. These figures are correct on Aug 31 2020 and do not include the ICC XI v Aus Test of 2005.

Note that only 10 captains have taken more than 100 wickets. Of these, all except Bedi would be considered all-rounders. The only other pure bowlers here are Walsh, Willis and Waqar Younis since even Sammy, Streak and Kumble made at least one century in their Test career. Going still further down below 50 wickets, the pure bowlers are Fazal Mahmood, IWG Johnson, Herath and maybe a couple of others.

The highest number of wickets by an Indian player in this table is 111 by Kapil, followed by Bedi, Kumble and L Amarnath.

Next we come to

Innings Bowling (including all instances of 7wi and above):

Kapil is the only one with a 9-wicket haul. This came in a Test which his team lost. Imran, Herath and Kapil again have 8-wicket hauls. Note the freakish 6 for 7 by Gilligan. Walsh had a 7-for and a 6-for in the same Test. That takes pride of place in the next table of

Match Bowling (including all instances of 9wm and above):

We see that Walsh’s 13-55 is clearly the best here, while Younis and Herath have more expensive 13-fors. Other good match bowling figures came from Imran, Gilligan and Border; the last rarely bowled and recorded the only 10-for in his career besides making 75. Also note Giffen’s 8-40.

Fazal (19.14) and Imran have the best bowling averages. The best for India is by Bedi.

It can also be seen that TL Goddard (1.68) and HB Cave have the best bowling averages. The best for India is by Amarnath.

The best strike rates here are by Waqar Younis (40.3) and Willis. The best for India is by Kapil.

This list of 43 bowler-captains includes current and recent players in Holder, Shakib, Mathews and Creme.

The bottom position is held by Vivian Richards, who rarely bowled. Above him is Hooper who was more of a batting all-rounder. Simpson and Dexter were also among those who did not bowl regularly.

Next we will take up fielding performances by captains.

Hope that you have read Part 1. 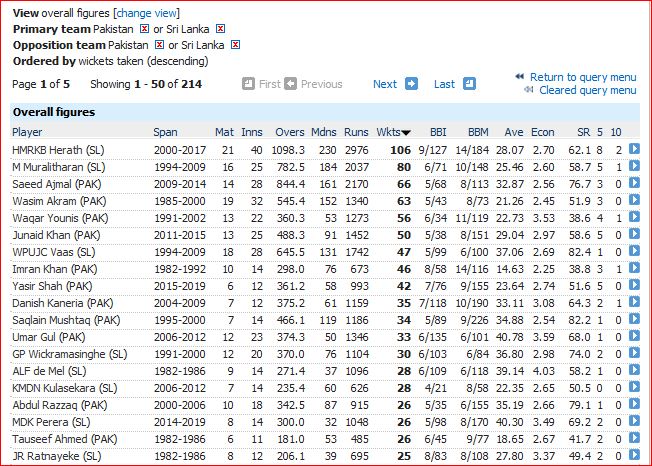 The top three wicket-takers are spinners, which is uncommon in modern times. Only Herath has two 10-fors. He also has the most (8) 5-fors. 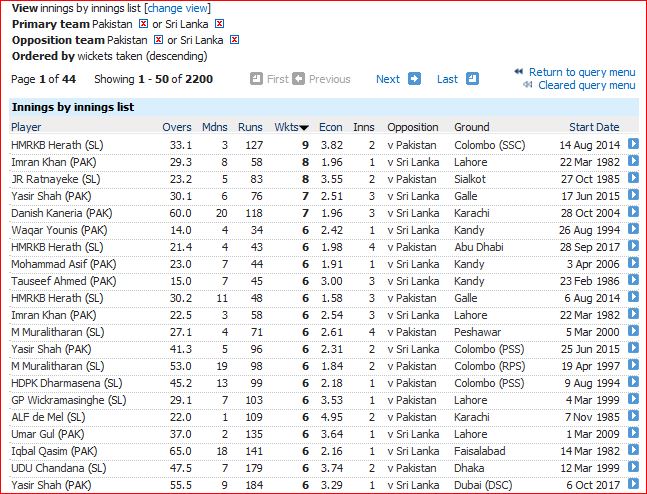 Muralitharan does not seem to have done that well against Pakistan, although Herath has. The two Ws are hardly seen here, though spinner Yasir Shah is more prominent here.

Best match bowling (including all 9wm and above): 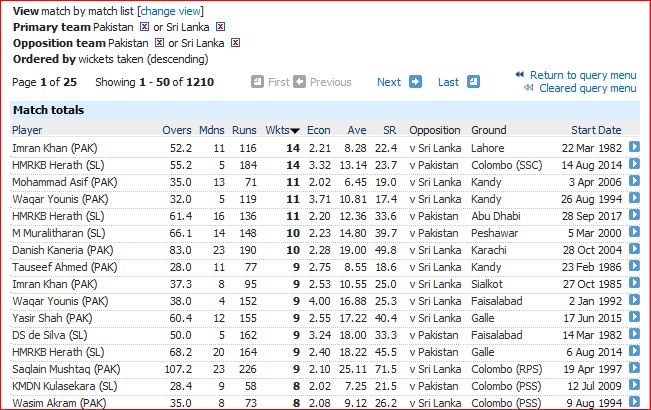 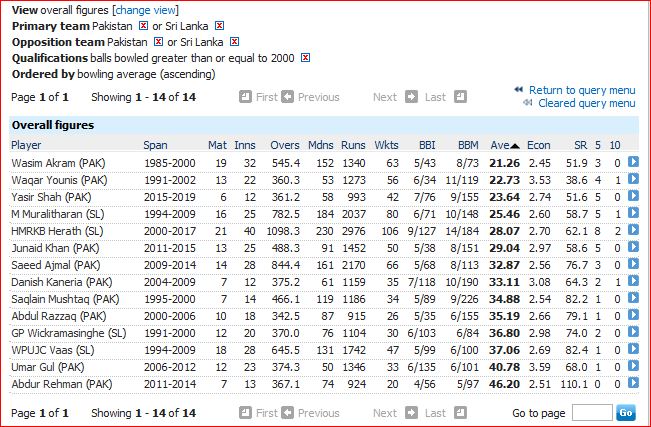 The two Ws have the best bowling averages. Akram and Abdur Rehman have the best economy and Younis  and Yasir Shah the best strike rate. Imran Khan did not play enough. 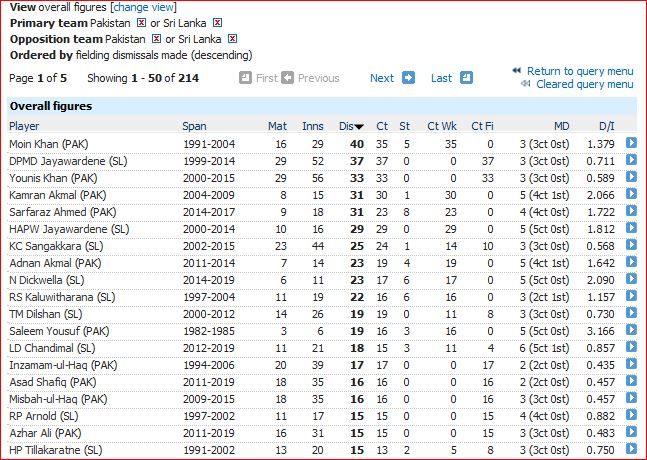 Moin Khan leads here. However, Sarfaraz Ahmed has the most stumpings. M Jayawardene has the most catches by a non-keeper.

Most match dismissals (6 or more): 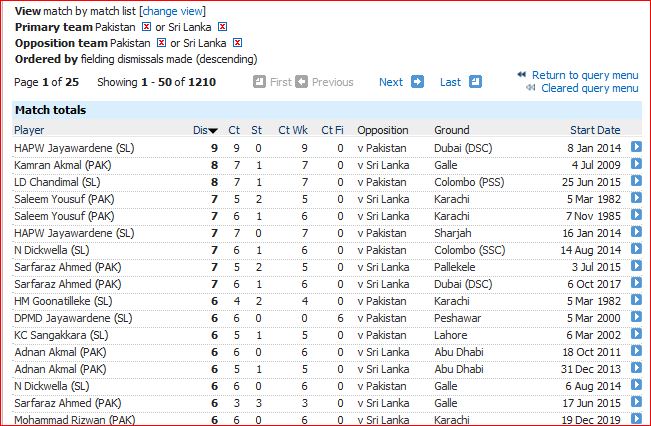 The lesser known Jayawardene leads here, while the better known namesake is the only non-keeper with 6 catches. 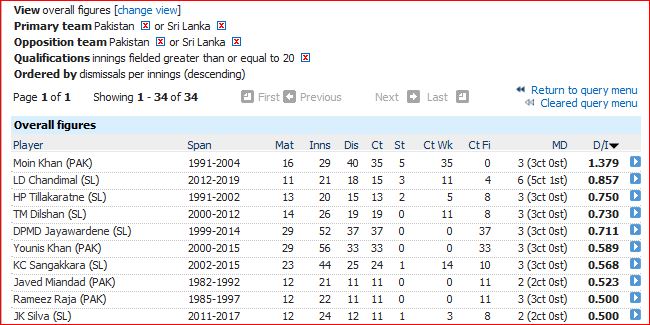 Moin Khan has a much higher dismissal rate than the next-in-line Chandimal. Note that several players from Chandimal downwards have played both as keepers and non-keepers. Moin Khan appears to be the only one who has played exclusively as a keeper.

This is on expected lines, as Imran Khan did not play enough against SL. So Akram emerges as the best all-rounder.

It is difficult to choose among these.

Finally we look at the last categories of those who drew all their Tests and did not draw any Test.

Captains who drew all their Tests: 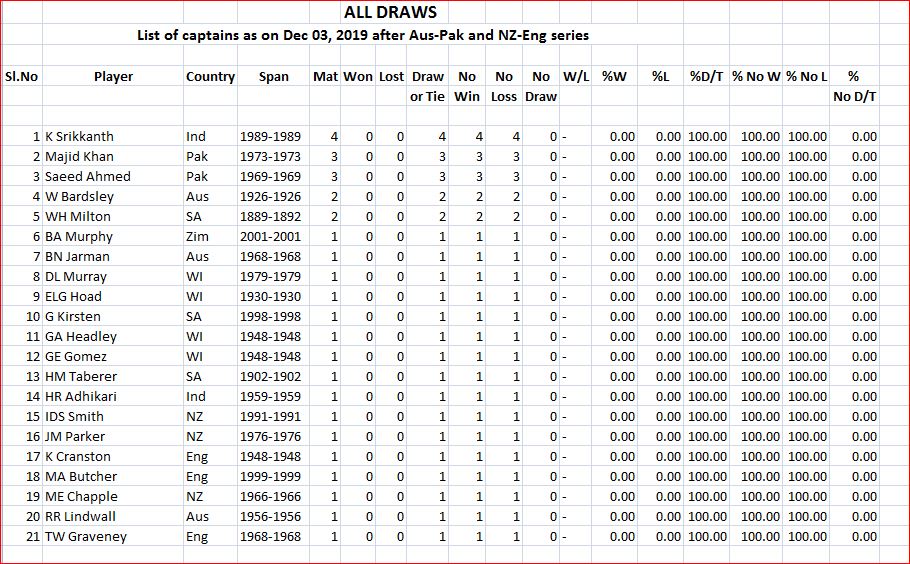 An unlikely leader who drew all 4 Tests in India’s 1989-90 tour of Pakistan. That was generally a dull series, though it did see the debuts of Sachin Tendulkar and Waqar Younis.

Then there are Majid Khan and Saeed Ahmed who drew all their 3 Tests. Strange when we we remember that Srikkanth and Majid were among the more aggressive batsmen of their time.

There are many others (mainly stand-ins) who drew the 1 or 2 Tests they captained in. The better-known are Bardsley, Murray, Kirsten, Headley, Lindwall and Graveney. Headley should have captained the West Indies earlier but for the earlier policy of having one captains of European descent.

Captains who never drew any of their Tests: 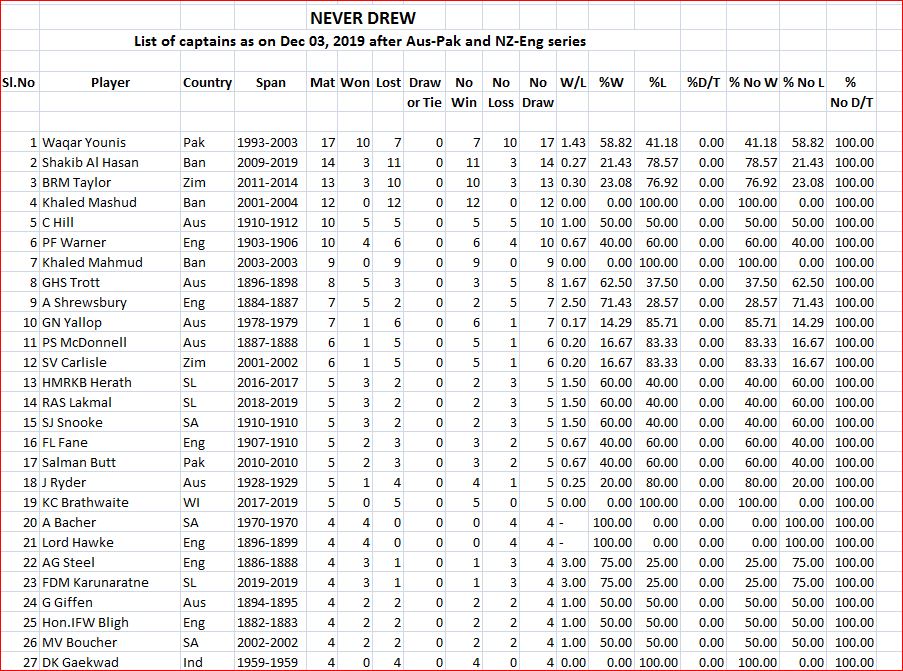 There are a total of 85 captains in this category. We are listing the 27 who captained in 4 or more Tests.

There are those who won all (Bacher and Hawke) and those who lost all (the two Khaleds of Bangladesh, today’s KC Brathwaite and DK Gaekwad of earlier times).

And there are those who won some and lost some but never drew-such as the leaders Waqar Younis (10 wins, 7 losses) and Shakib al Hasan (3 wins, 11 losses).

Perhaps they deserve credit for their determination to get results rather than draws.

The “1000 and no century” club got its 52nd member in GOAT NM Lyon. He does not have a monopoly on this title as it was first used for Mohammed Ali (ex Cassius Clay) long ago. 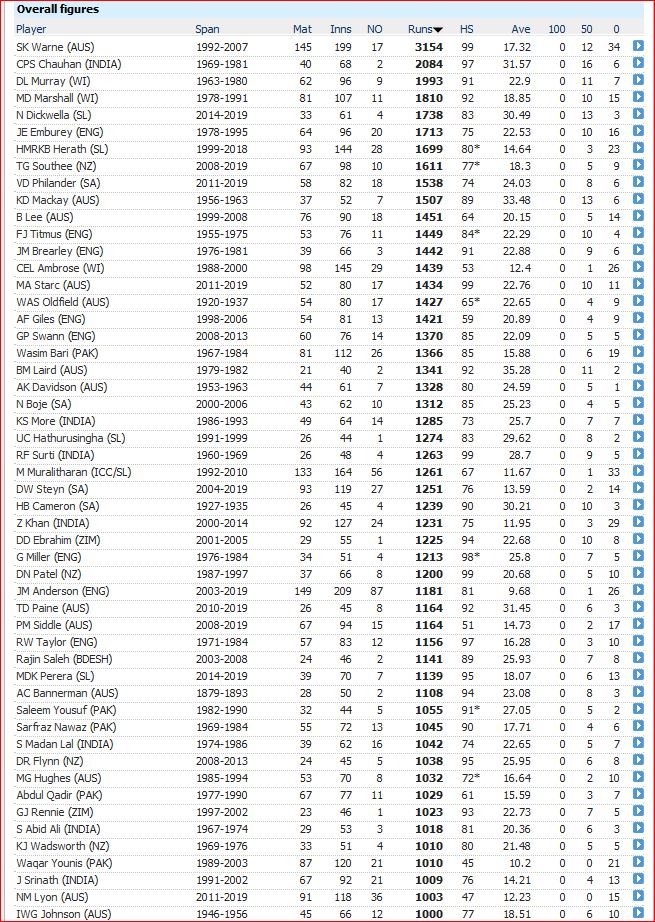 Waqar Younis (top score 45) and now Lyon (top score 47) are the only ones who never crossed 50. As we can see above everyone else made at least one 50. Chauhan with 16 is followed by Dickwella and Mackay with 15.

Warne, Starc, Surti, and DN Patel finished with a top score of 99.

At the other end of the scale are the 10/11 batsmen such as JM Anderson (9.68) who is the only one with a single-figure average. Waqar Younis and Muralitharan are next, with Zaheer Khan, Lyon, and Ambrose following.

Even Anderson did get up to 81 once. He, Ambrose and Muralitharan made precisely one fifty in their long careers.

There were a few such as Kumble and Vaas who made one century towards the end of their careers. Otherwise they would be near the top of this list.