In recent years it has been apparent that the standard of the Asian Games is higher than that of the Commonwealth Games, so more attention is focused on the former. However, it is worth having a quick look at the 2018 CWG and India’s performance there and in earlier CWGs.

Note the large number of countries/territories which failed to win a single medal. The largest countries with this status are Malawi, Mozambique, Tanzania and Zambia.

While Sri Lanka and Bangladesh drew a blank in the Asian Games later in the year, they did win something here.

Here is how India has fared in the CWG over the years:

It can be seen that India’s best performance was when they were hosts in 2010, and that they have slipped somewhat since then.

And finally, the one occasion that cricket featured in the CWG. In this 1998 Games at Kuala Lumpur, India participated with a second-string team. So did several other countries. These 50-over matches had List A status but were not classified as ODIs. India did not win a medal.

This was the first time that South Africa won a major cricket tournament (though this was not taken seriously by cricket followers). They did however win the first ICC Knock-out championship in 1999. This championship became the Champions Trophy in subsequent years. They are still waiting for another major tournament win.

Here is the final medal tally:

Kazakhstan and Thailand are below India in the rankings but have a higher total number of medals.

It is sometimes instructive to look at the bottom of the table. The countries which failed to win a single medal are: Bangladesh, Bhutan, Brunei, Maldives, Oman, Palestine, Sri Lanka, East Timor and Yemen. If cricket was there 🙂 Bangladesh and Sri Lanka may have won something there.

Those who got only bronzes and nothing else are Pakistan (4), Afghanistan (2), Myanmar (2) and Yemen (1). Then there is Nepal with 1 silver and nothing else – like India in the 2004 Olympics.

And there were many Olympics where India had a gold in hockey and no other medal.

The learning curve can be quite steep in international cricket, although Bangladesh have now shown some signs of improvement since they started. Their performance in Tests is still quite dismal, and it is therefore worthwhile to compare how other countries fared in their first 25 Tests and 25 ODIs. It is often forgotten that India and New Zealand took some 20 and 25 years respectively to record their first Test wins. Here we see a tabulation of all Test-playing countries in their first 25 matches: 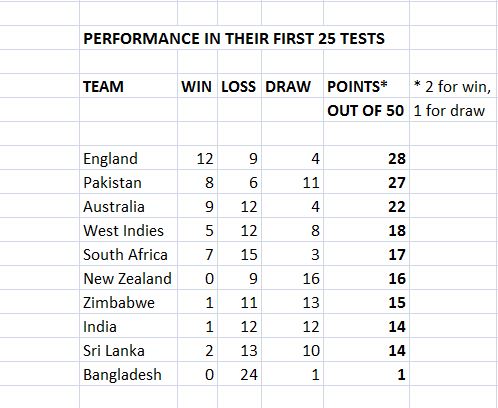 It can be seen that England (closely followed by Pakistan) lead the table. New Zealand, Zimbabwe, India and Sri Lanka had a rather unimpressive run of wins but were able to draw more consistently than Bangladesh.

Now let us look at the first 25 ODIs for the top 12 teams at the moment, being the 10 Test nations plus Afghanistan and Ireland. As in the case of Tests, we have removed the multinational teams. Apart from the ICC XI there are Africa XI and Asia XI to be removed. 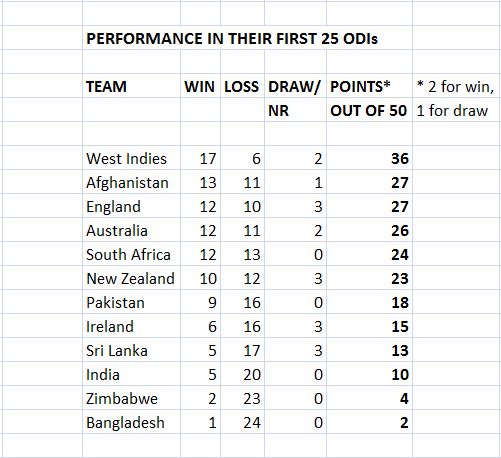 Afghanistan and Ireland have a bit of an advantage as they played more matches against lower-ranked teams which are on the fringes of ODIs, though not good enough to dine at the high table of the main ICC rankings. As we might guess, the West Indies were the big bosses from the beginning though Afghanistan and England tie for the second place, closely followed by Australia. Zimbabwe and Bangladesh take up the bottom. Bangladesh sadly is at the bottom in both formats.

4 of these teams won their first ODI: Afghanistan, Australia, New Zealand and Zimbabwe while the other 10 lost their first matches.

It might be instructive to see how they fared in their first 50 Tests and 50 ODIs.