Today we take up the cases of those who got to bowl in only one match or innings. First we consider Tests, followed by ODIs and T20Is.

5 wickets or more in their only Test:

Only one ten-for by CS Marriott, though the best innings bowling here is 7/95 by WH Ashley in the 19th century. All instances of fivers in their only Test are included above.

Also note the 1-Test careers of PJ Cummins and JP Faulkner who probably will play again. There is also CA Smith who spent most of his life in Hollywood and was known as Aubrey Smith

Also note the strange case of the two unrelated Banerjees who bowled well in the only Tests they played in the 1948-49 series against the West Indies. We will meet another 1-Test Banerjee in a moment.

3 wickets or more in their only Test innings: 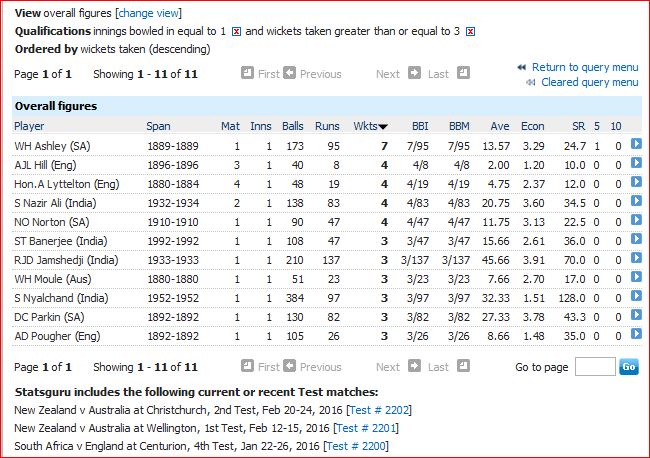 WH Ashley is the only one with a five-for in this category. Hill, Lyttelton and Nazir Ali bowled in only one innings in their multi-Test careers. Lyttelton’s 4-19 is the best innings bowling by any designated wicket-keeper. A few others such as Boucher and Kirmani have taken 1 wicket in an innings.

A few more players from India here, including ST Banerjee. All 3 players with this surname played exactly one Test each, despite getting reasonable returns.

Three or more wickets in their only ODI:

While an unknown player from PNG tops this list,the only well-known player here is BS Chandrashekhar who was one of India’s leading bowlers of the 70s. Stott played his only ODI during the 1979 World Cup. DV Lawrence played a few Tests with some success.

Three or more wickets in their only ODI innings:

The only addition is England’s veteran Test player Fred Titmus who, like Colin Cowdrey, earned a recall to the ill-starred England tour of Australia and New Zealand in 1974-75.

2 or more wickets in their only T20I:

The best performances here are by little-known players such as Mansoor Amjad and CG Burnett. The better-known Test players here are MS Panesar and CT Tremlett.

2 or more wickets in their only T20I innings: 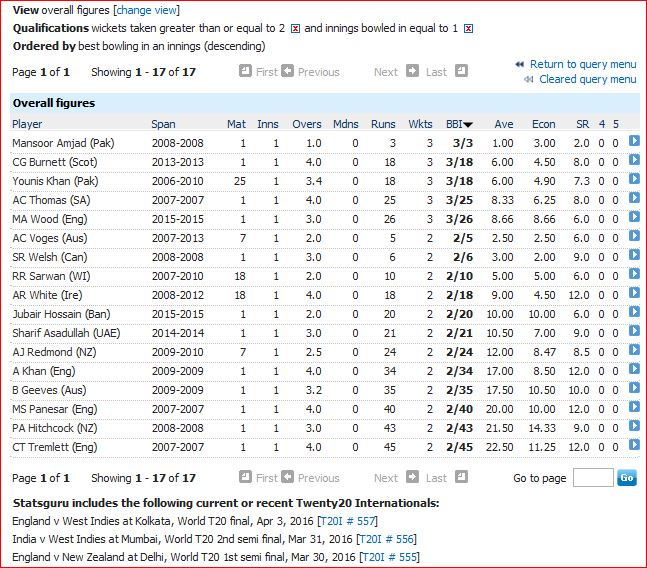 Here we have several instances of those who bowled only once in a relatively long T20I career (notably Younis Khan in 25 matches, Sarwan and AR White in 18 matches). There are also AC Voges and AJ Redmond (primarily  batsmen).

Next we will take up the best fielding performances by those playing in their only matches and innings.