The results are summarised below:

India maintain their lead at 12-10, although England leads 5-4 for matches in England.

We now look at individual performances.

Kohli remains the leader, considerably ahead of runner-up Buttler.

No one has more than one century.

The most fifty-plus scores are 4 by Kohli.

Best innings bowling (including all 4wi and more):

Most dismissals (6 and more):

Headed by Dhoni (5), while Rahane had 4 catches as a fielder.

Hope you have read part 1:

de Villiers has the most catches by a fielder (25) besides 15 catches as a keeper. Next among fielders is Kallis with 23. Note that K Verreyne has 14 in just 2 Tests.

Most dismissals in an innings (5 or more):

Most dismissals in a match (7 or more):

Saha has the most, with 5 catches in each innings. Other current players are de Kock, Pant and Verreyne.

Boucher leads by a large margin over Dhoni.

Apart from the “hybrid” de Villiers who played both as a keeper and fielder, GC Smith has the highest dismissal rate among fielders.

Rahane is the only current player here.

Only SM Pollock can be called a genuine all-rounder. Kallis is not here as he bowled less than 2000 balls against India.

The best of these match performances seems to be by N Boje.

AK Markram has now played 29 Tests. 18 of them were won by SA and 11 were lost. None were drawn. He thus continues to hold the record for playing in the most Tests without a draw. Next is England’s GA Lohmann of long ago who played in 18 Tests (15 wins, 3 losses).

Here we have the raw data for all Test captains. Naturally the W/L ration is undefined for those with no losses:

Here we have everyone who captained in 2 or more Tests without a loss.

This list is headed by WW Armstrong of a century ago with 10 Tests including 8 wins and 2 draws, followed by DB Close (7 Tests, 6 wins and a draw).

Those with an all-win record are A Bacher, today’s Babar Azam and Lord Hawke who all captained in 4 Tests.

Also note AM Rahane with 5 Tests, 4 wins and a draw.

However, this list would be more meaningful if it was restricted to those who captained in 10 or more Tests.

As mentioned earlier, WW Armstrong is the only one here with no losses. Next come Jardine, Bradman and Steve Waugh. Waugh has the highest ratio for those who captained in 25 or more Tests.

From India, V Kohli is the only one.

Much has been said about the unexpected triumph at Brisbane, as in this:

Here we look at statistical summaries of all Tests between these countries.

While Australia still leads by a healthy 43-30, India has also developed a strong home advantage over the last few decades.

We now look at individual performances.

The most centuries in these Tests is 11 by Tendulkar, followed by Ponting, Smith and Gavaskar with 8 apiece.

The total runs are also in the same order. Pujara and Smith have the most runs by current players.

While there have been many tall scores over the years, this was a low-scoring series. The highest score by current players is 204 by Pujara in 2012-13. Next is 202 and 193 (both by Pujara!). Kohli’s highest is 169 which does not appear above.

Gilchrist is just ahead of Sehwag, and there is a long gap ahead of Warner. Other current players here are Smith, Kohli and Rahane. As you may expect, Pujara and Gavaskar are not in this list.

While batting and bowling records are well covered in most sources of cricket statistics, fielding receives lesser attention (as the data points are only for catches and stumpings). Here we take a closer look at this neglected field.

Most dismissals in an innings (6 and above):

The first keeper to take 6 catches/dismissals in an innings was Wally Grout in 1957-58.

The record was then shared by DT Lindsay, JT Murray and SMH Kirmani, the last instance being in 1975-76.

Wasim Bari then became the first to take 7 dismissals in an innings in 1978-79. He was followed by Bob Taylor (though that was overshadowed by Botham’s 13 wickets + century as well as a total eclipse) in 1979-80. Later Ian Smith and Ridley Jacobs joined the 7-catch club.

Most catches in an innings by a non-keeper (5 and above):

The first non-keeper to take 5 catches in an innings was Victor Richardson, who is nowadays better-known as the maternal grandfather of the Chappells. Some resemblance can be seen:

The second to do so was India’s Yajurvindra Singh on his debut in 1976-77. A total of 12 fielders have now reached the mark of 5 catches in an innings.

Now we look at match performances.

Most dismissals in a match (9 and above):

The first to make 9 dismissals was Australia’s Gilbert Langley in 1956 (Laker’s series).

Subsequently several others have taken 10 dismissals (a total of 4 including WP Saha and Sarfaraz Ahmed) and 11 dismissals in a match (a total of 3 including AB de Villiers and Rishabh Pant).

Most dismissals in a match by a non-keeper (7 and above):

The first to take 7 catches in a match was Greg Chappell in 1974-75. Unfortunately his grandfather did not see this as he had passed away a few years earlier, although he had lived long enough to see Ian Chappell make a good start in Tests.

And the second was Yajurvindra Singh on his debut in 1976-77.

Unfortunately he played only in 4 Tests.

Several others took 7 in a match. The next record of 8 catches was set by AM Rahane in 2015 (although India lost that Test).

He continues to have that record to himself, although you will see ABD with 8 catches as a fielder. However, he took these 8 catches as a keeper substituting for the injured Q de Kock. He is listed as a non-keeper here as he was not the nominated keeper for this Test.

de Villiers was also the captain in this Test. This was a day-night Test against Zimbabwe which got over in 2 days.

Meanwhile, several others took 7 catches in a match. The last was KL Rahul in 2018.

RR Pant now has a share in the most dismissals in a match.

Incidentally, AM Rahane has the record for most dismissals by a non-keeper in a match:

de Villiers actually took 8 catches as a keeper as the specified keeper (de Kock) was unfit.

Pant took 6 catches in the first innings and 5 in the second. The innings record is 7, shared by 4 keepers.

During the third SA-Aus Test at Cape Town, SPD Smith perhaps became the first Test captain to be sacked in the middle of a match and told to hand over charge. However, he may draw small consolation from setting a minor fielding record.

Most catches in an innings by a captain (5 and above): 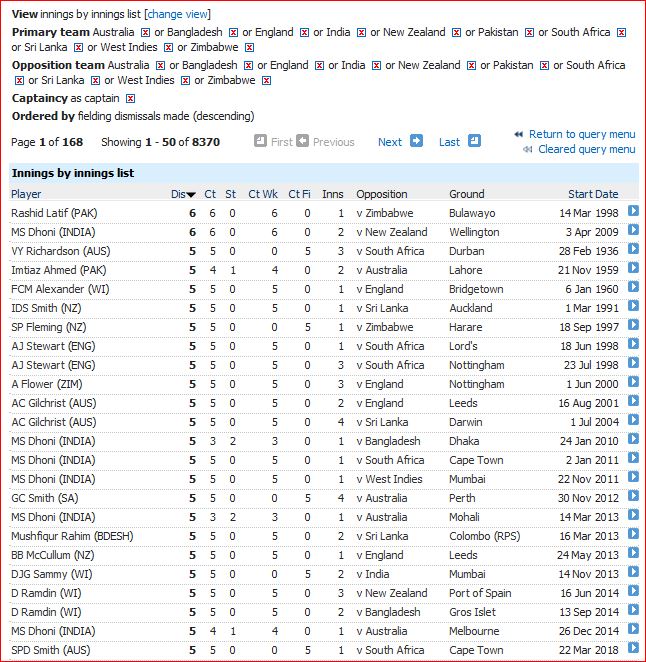 While wicketkeeper captains Latif and Dhoni have taken 6 catches in an innings, Smith equalled the non-keepers record for captains with 5 catches, along with VY Richardson, SP Fleming, GC Smith and DJG Sammy. There are a few non-captain fielders such as Yajurvindra Singh and AM Rahane who have also taken 5 catches in an innings.

We also look at match fielding performances by captains (6 dismissals and above):

Finally, we look at overall fielding performances by captains (70 dismissals and above):

While Dhoni has the highest number of dismissals, he is followed by several non-keepers led by GC Smith and SP Fleming who have over a hundred catches. Steve Smith is fairly high up here, sandwiched between MA Taylor and Lara.

Hope you have read the earlier posts on Test batting and bowling performances of 2017. Now we move to fielding.

Most dismissals-15 and above: 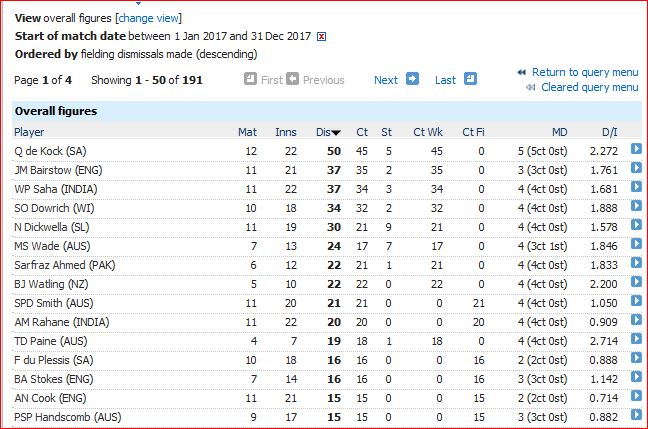 de Kock with 50 dismissals is far ahead of the next two, Bairstow and Saha who each played 11 Tests and dismissed 37. The most stumpings were 9 by Dickwella, while SPD Smith had the most catches (21) by a non-keeper. Rahane was close behind him with 20.

Most innings dismissals-4 and above: 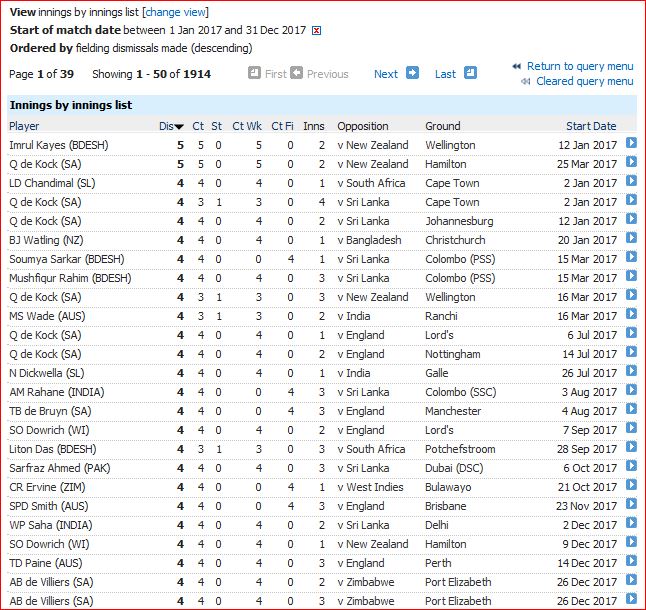 The top position is shared by Kayes and de Kock, while several non-keepers took 4 catches. None of the keepers here took more than one stumping.

Most match dismissals-6 and above: 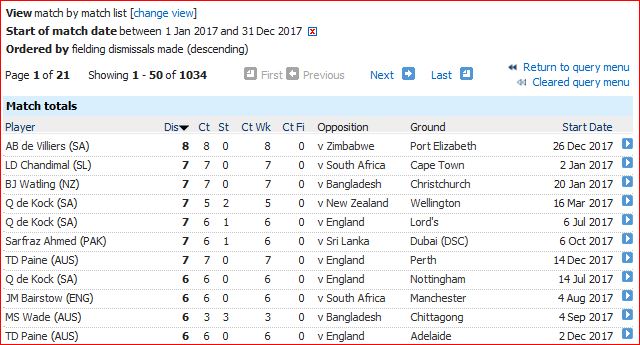 de Villiers leads with 8 while several others made 7 dismissals. The most stumpings were 3 by Wade, while no fielder took 6 catches.

As in the first table, de Kock is far ahead of the runners-up Bairstow and Saha. Smith and Rahane have the best rate among non-keepers.