An update which shows a group from West Bengal visiting this area. This was uploaded earlier in 2019.

Commentary is in Bengali with English subtitles.

The narrator was not quite correct about the pre-partition Darjeeling Mail. In fact it took over 13 hours from Sealdah to the old Siliguri Jn (now Siliguri Town). And it did not go anywhere near Bangaon and Jessore. Here you can see its timetable in 1944:

In the next post, you will see more about current passenger services on the BR trains through Hili. Remember that it is dual BG/MG. More precisely, it was BG since the 1920s and MG has been added after 2000, to  facilitate MG services from Dhaka across the Bangabandhu Bridge to destinations such as Dinajpur, Rangpur and Lalmonirhat which are (or were until recently) on MG lines from Parbatipur.

Getting information about the railway network in Bangladesh is difficult, especially as detailed timetables for the public have not been issued since around 1980. (Sri Lanka also seems to have stopped issuing timetables long ago). Anyway, one reference which gives the list of stations based on timetables up to 1978 is: http://www.railwaystationlists.co.uk/pdfasia/bangladeshrlys.pdf

The Indian Bradshaw used to publish timetables of East Pakistan and Bangladesh up to the mid-1970s although I have grave doubts as to whether the data for India’s neighboring countries was regularly updated.

Anyway, I have collected a few maps from various sources which some may find useful.

This one is from the “Railway Map of India” published by the Survey of India in 1991. Data for neighboring countries may not be fully up to date. 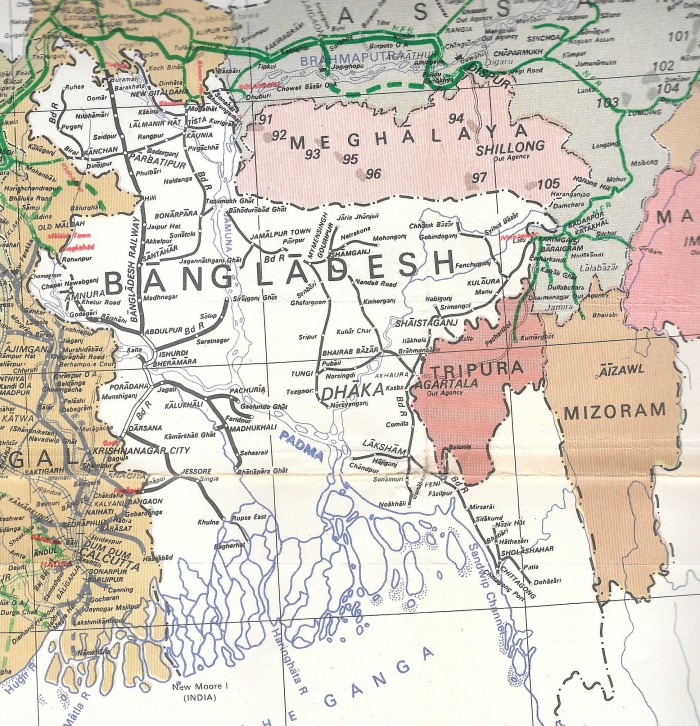 Note that the border stations on the Indian side are marked in red. There were probably limited cross-border goods services on a few routes at that time, though details are unclear. Note the Rupsa East-Bagerhat line being shown as NG, though from other reliable sources we know that it was converted to BG in around 1970 and closed after a few years.

Also note that there was no bridge connecting the western and eastern halves of the country. This purpose was served by the ferries between Sirajganj Ghat and Jagannathganj Ghat, and between Tistamukh Ghat and Bahadurabad Ghat. The Bangabandhu Bridge came up near the Sirajganj-Jagannathganj ferry.

Now we have this amateur effort from 2002. It was created by Y. Sakai, who appears to have been a Japanese who spent some time in Bangladesh. He tried to show every station which was then functioning. It does not show the link between the Bangabandhu bridge and Dhaka, which had not opened then. 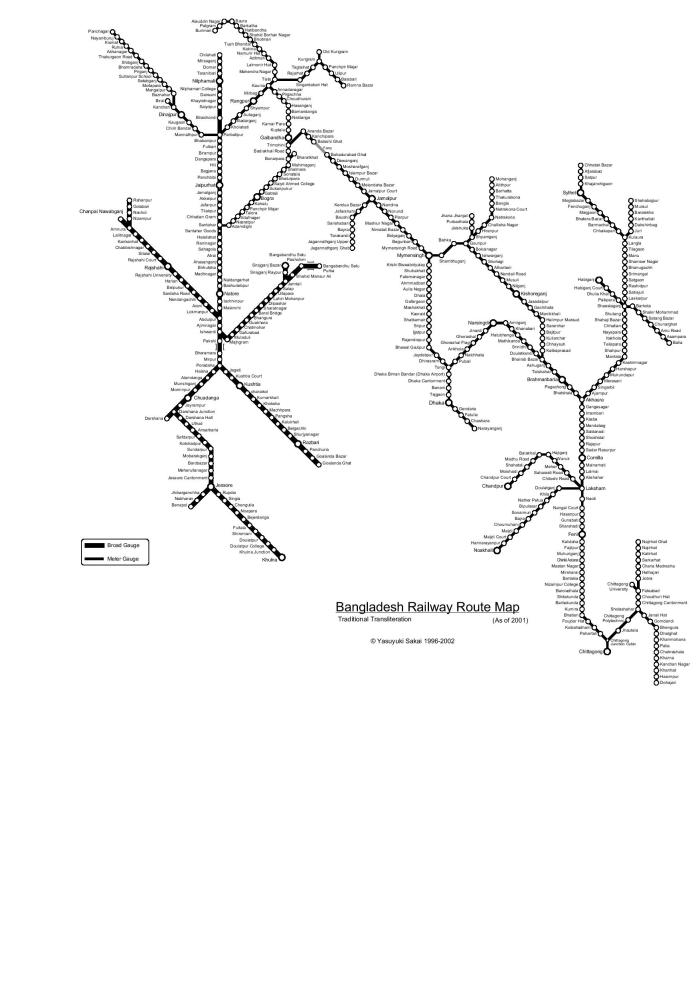 Also in pdf, which is easier to zoom and read:

This mapmaker seems to have done his own transliteration from Bengali to English, so the names may not exactly tally with earlier English maps and timetables. I found it useful while traveling in 2008, before the age of smartphones where one could follow Google Maps and the like.

Finally we have this map dated 2013 taken from the official website. This can be considered to be the latest official version, though it does not show every station. 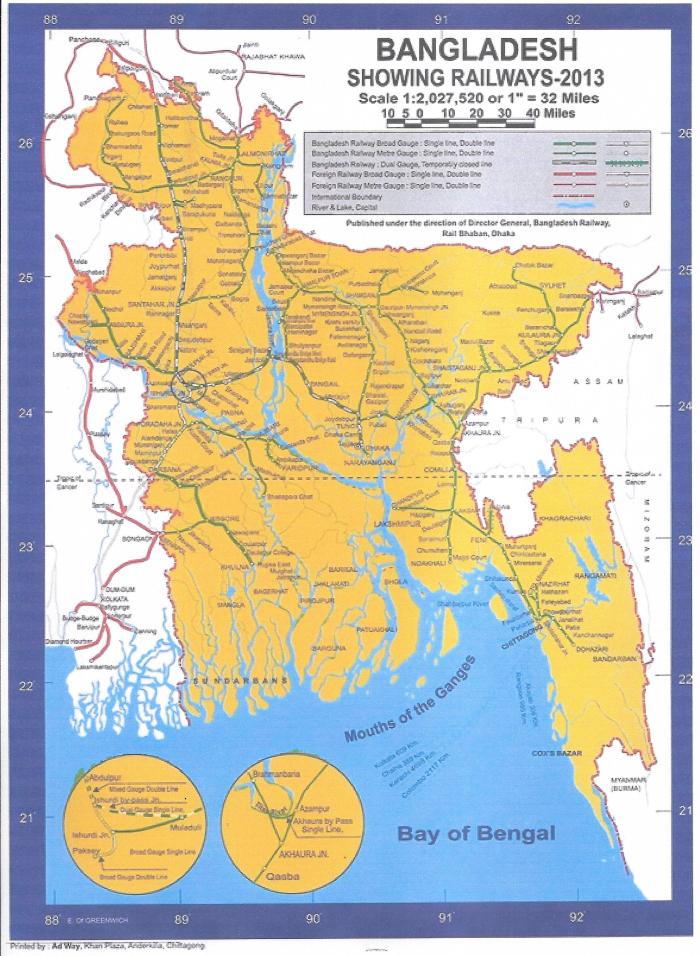 It does have some information about the little-known bypasses of Ishurdi and Akhaura which avoid reversals for numerous long-distance trains. Note the newer developments such as the links from Bangabandhu bridge to Joydebpur (for Dhaka) and Jamalpur Town (for the Mymensingh area).

Some lines like Feni-Belonia are shown to be closed, but the Kulaura-Shahbazpur (ex Latu) line is shown to be open while other sources say that no train has run there since around 2002.

Other points of interest are at least two stations where Bangladeshi trains run within a few metres of the Indian border, at Hili in the west and Kasba in the east.

Someone who was really interested could create a more detailed atlas using this as a basis and supplementing it with Google Maps. To show sufficient detail, it would have to be in book form like the well-known Great Indian Railway Atlas. See http://indianrailstuff.com/gira3/

But would it be commercially viable? Perhaps only a handful of railfans (and that too mainly from outside Bangladesh) would want to buy it. The print-on-demand self-publishing sites could provide a way out.