Here we shall see that predicting on the basis of long-term form can be misleading.

This is being written after Pakistan beat England on Jun 14.

England led 7-2 in this period

In England, England led 4-1 (all in the summer of 2016). And the only match Pakistan won was at Cardiff.

No matches in Pakistan. On neutral grounds (UAE), England led 3-1.

So, on paper, it looked like Pakistan had no chance. But the result was something else.

Now let us do the same analysis for India and Bangladesh in the 5 years up to Jun 14, 2017

In India there were no matches.

In Bangladesh, India led 4-2 with 1 no-result

But it should be noted that the last series between India and Bangladesh was in Bangladesh in 2015, when Bangladesh won 2-1. Forgotten that already? See the series summary (and scorecards if you want):

The key here was the “shock value” of  Mustafizur Rehman who made his debut here, with 5,6 and 2 wickets in the 3 matches. He was deservedly Man of the Series.

But then, he has not done too well in this tournament. See the details of his recent matches here: http://www.espncricinfo.com/ci/content/player/330902.html

So we see that India does have a strong record over Bangladesh in the last 5 years. Just like England had over Pakistan. India should not be overconfident (remember the World Cup of 2007?)

If you are reading this, you probably have read about the weird border between India and Bangladesh in the Cooch Behar/Rangpur region. If not, you might as well read it now:

But there are plenty of other strange things on the borders of these countries. Many of them arise from the Radcliffe line of partition.

For the basics, read the first few paragraphs of this:

The writer of the latter piece is quite knowledgeable though he fails to mention that Sylhet district of Assam was also partitioned.

Today I will deal with one specific oddity which is on the border between West Bengal and Bangladesh.

The actual reports produced by the Radcliffe Commission total only about 7 pages, dealing with the partition of Punjab, Bengal and Sylhet district of Assam. Strangely enough these documents do not seem to be easily available anywhere on the net, though they are readily available in various publications. The following extract is from p.21 of “Committees & Commissions in India, 1947-54″ compiled by Virendra Kumar (Concept Publishing, Delhi, 1976)

What this means is the boundary line (which was basically intended to segregate Hindu-majority and Muslim-majority areas) needed some special adjustments to avoid disruption to communication links. This was not the only place this happened. In this particular case the north-south railway line (which was then on the route of the prestigious Darjeeling Mail) remained a major connection between the north-western part of East Pakistan and the rest of the country, and so it should not be disturbed and the Pakistani trains should be able to run without hindrance.

The map of Hili railway station and surroundings:

You could expand it further if needed. What should be apparent is that the town of Hili lies on both sides of the border, and that the railway embankment itself is the border. The border itself seems to cut through the station premises.

Here are a few pictures from this area:

Border marker near the railway line:

The black cow is closer to the Indian border than the white cow. Perhaps they come and go across the border. Probably the black cow has realized that her life expectancy will be more in India than in Bangladesh.

An Indian truck waiting to cross the border (which is the railway line itself): 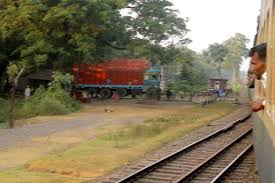 A couple of pictures from Hili station itself. The second one shows some semblance of security with the BGB (the equivalent of the BSF): 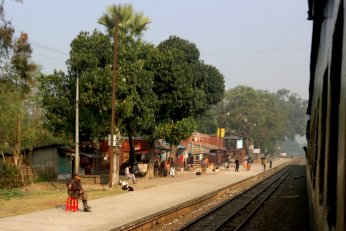 (As in many smaller stations in Bangladesh, the signboards may be only in Bengali).

To get a better idea of the ground situation, here is a segment of a documentary by CNN-IBN which apparently dates to 2007. It should be self-explanatory:

As you can see, at that time no one seemed to bother if you crossed the border in either direction. Probably things are a little tighter now, though the great wall of barbed wire probably has a break here.

Here is a video of Bangladeshi trains passing Hili station, taken from the Indian side: https://www.youtube.com/watch?v=w-xek8UeS0E

Here you can see the “Welcome to Bangladesh” sign right next to the railway line.

A Bangladeshi video showing BGB officers visiting Hili station. You can see the border markers in the station premises:

Finally, a better view from the Bangladesh side. This is a video shot by a Bangladeshi visitor to the border areas (in Bengali with English subtitles).

Not sure if you would find the entire video interesting, but 1.20 to 2.50 pertains to Hili with coverage of the station and the border.

So the festivities have begun. Since the practice of singing the national anthems seems to have picked up in recent tournaments, here is a quick run through the anthems which you are likely to hear over the next month:

This has a lot of disclaimers and peculiarities, as we will see. There is no country called the West Indies, so this “anthem” is purely used for cricket. I have been able to get the English lyrics or English translations for all the anthems.

As usual in such matters, the United Kingdom is on its own trip.

“God Save The Queen” : https://www.youtube.com/watch?v=ppIomb3r_3Q is the national anthem of the United Kingdom. Scotland has a separate song which is not an official anthem, but is played at sporting events. That is given above. England sticks with the U.K. anthem for soccer but uses another song called “Jerusalem” for cricket, which is what you hear above. Ireland here includes Northern Ireland (which comes under the U.K.) and the Irish Republic (which is another country whose anthem is given here).

Several countries have versions of their anthems in different languages: New Zealand’s includes Maori followed by English in the same anthem. South Africa’s has five languages, one after another: Xhosa, Zulu, Sesotho, Afrikaans and English. Sri Lanka’s has Sinhala and Tamil versions, but the former is more commonly used. Zimbabwe’s has versions in three languages: Shona, Ndebele and English. Similarly Ireland has it in Gaelic and English. Scotland’s unofficial anthem also has  Scots and  Scots-Gaelic versions, though it is unclear if these are unofficial or even un-unofficial.

The UAE anthem might remind Brits of the term “Blighty”, said to be derived from Urdu: According to the Oxford English Dictionary, the word derives from “bilayati”, a regional variant of the Urdu word “vilayati”, meaning “foreign”, “British”, “English” or “European.”

Today we  return to this topic with this list of trivia compiled by Jim Fergusson, who has studied timetables of many countries. His site is

It will be of particular interest to those who study  the railways of South Asia (other than India). He has painstakingly put together lists of every station which has ever existed in Bangladesh, Pakistan and Sri Lanka and several other countries (but not India, probably because it is too complex). This is particularly useful for those interested in the railways of Bangladesh and Sri Lanka because they have not published timetables for public use for a few decades. Railfans in these countries do not seem to know why this is so. However, his station lists are a little out of date as they do not include lines built in recent years, such as the East-West link over the Bangabandhu bridge which has made through running possible between the two systems in Bangladesh for the first time. This was completed around 2002. He does include the northern lines in Sri Lanka as they appeared in the timetables prior to the civil war. A sizable part of the main lines to Jaffna and Talaimannar were disused from 1983 and they have been restored only in recent months, though they might be fully restored only by the end of 2015.

Pakistan has been a little more regular in publishing timetables although the system itself seems to be shrinking rapidly due to various reasons, mainly the shortage of locomotives. Of course, the timetables show the long-closed lines through the Khyber Pass to Landi Kotal and even the short-lived extension to Landi Khana which saw service only from 1926 to 1932, besides various narrow gauge lines which all closed in the early 1990s.

Many more peculiar names from around the world can be seen here:

There is a Silly station in Belgium. The nearest we have in India is Silli, near Ranchi.

If someone tells you to go to Hell, there is this station in Norway you can go to. It is served by several trains a day from the larger city of Trondheim, 31 km away.

Another view of the station is: 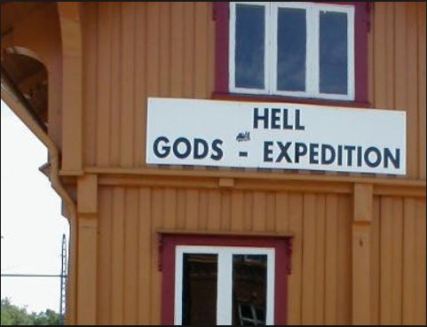 As you would know, God is not likely to be here. This is Norwegian for “cargo handling”.

If you come by car, you would see this sign:

Naturally, tourists are keen to have their pictures taken here. The only hellish things here are the prices, as Norway is one of the most expensive countries in Europe.

If you are familiar with the Devil, you would expect to find number 666 here. However, for that you have to move to the US and travel by  Amtrak service 666 which runs from Harrisburg to New York on Saturdays and Sundays: 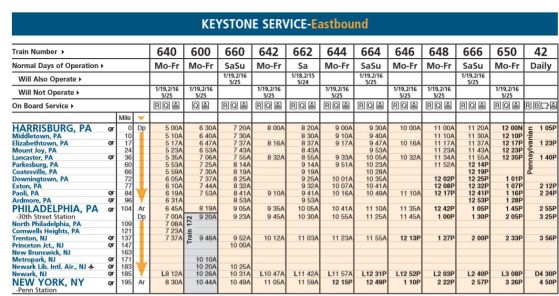 The Indian train  numbering system has been rationalized over the past few years. Since late 2010 every timetabled train, ranging from the humblest 2-coach DMU to the prestigious Rajdhani Expresses has 5 digit numbers. Most of the express trains have had 4 digits from the early 1990s, though slow passenger trains had various numbers including alphanumeric (e.g. 1 DUK) or 3-digit. Much to the delight of devil worshippers, there was indeed a 666 passenger between Udagamandalam (Ooty) and Coonoor which has been duly captured on film:

This train now has a 5-digit number. But Satanists need not lose heart, since there is still a diesel loco with the number 6666. It is probably still running in the Ahmedabad area (see below for it running with its Sabarmati markings) though it was based at Mhow in central India some years ago.

Finally, if you were wondering about the rude name alluded to by Mr Fergusson, you can check the maps for the roads between Linz (Austria) and Passau (Germany) where you will come across the village of Pucking.

We return to short names in the next instalment.

The copyright of all pictures and portions of other websites given here rest with the original owners.