Kuldeep Yadav, classified as a slow left-arm Chinaman bowler, took 4-68 in his first Test innings. Let us see where this performance stands.

If you are not clear as to what type of bowling this is:

There are a few others such as Roy Fredericks who rarely bowled-but he did take a few Test wickets including AD Gaekwad of India.

However, Statsguru’s database does not list Chinaman as a class of bowlers. We can only segregate left-arm spinners.

The following tables have data up to the evening of 25 March 2017. 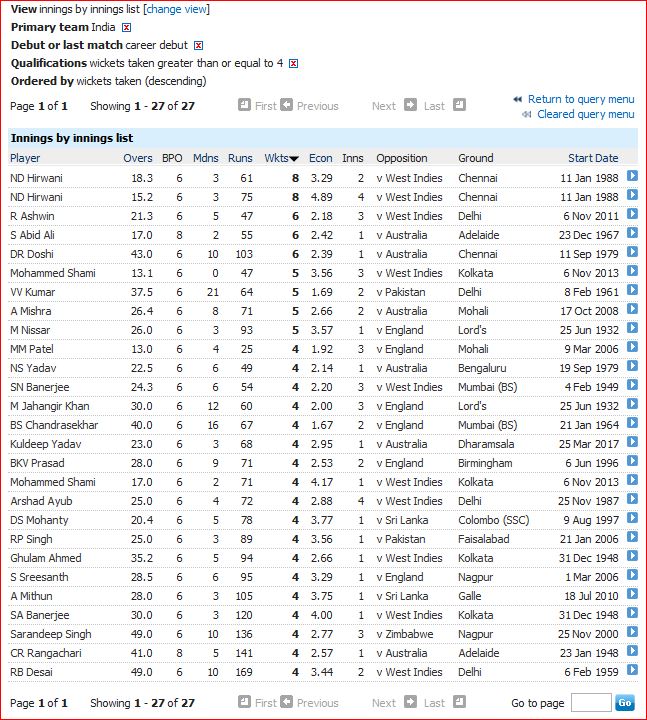 Here Kuldeep Yadav is 15th on the list of those who took 4 or more wickets in an innings on debut. Hirwani’s twin 8-wicket hauls head the list. There does not seem to be any known Chinaman bowler here. In fact, there is only one other slow left-arm spinner here. Back to this later. 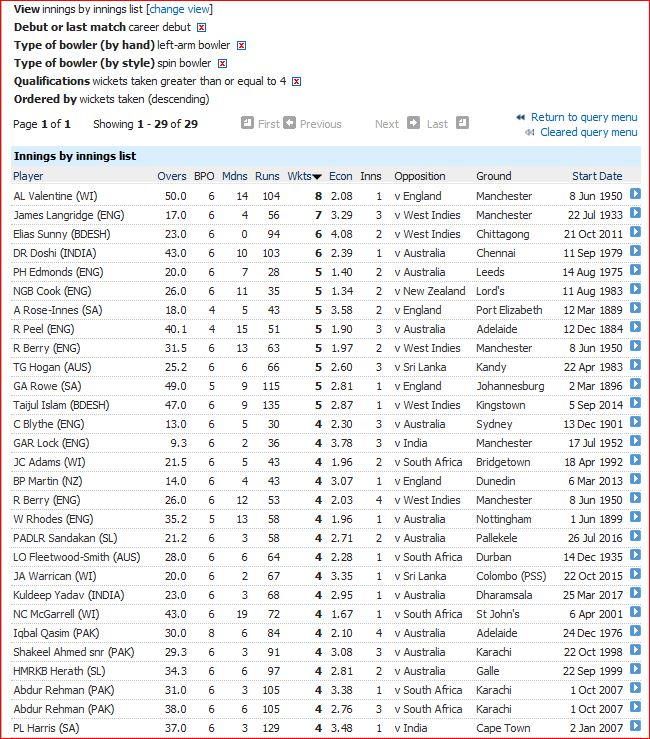 Here Kuldeep Yadav is 22nd of the 29 who took at least 4 wickets in an innings.Note Abdur Rehman’s 4-105 in both innings which is the best case of the same bowling analysis in both innings on debut. And R Berry took 5wi and 4wi in the first of his two Tests; perhaps he was overshadowed by fellow debutants Ramadhin and Valentine.

LO Fleetwood-Smith and the current Sri Lankan player PADLR (Paddler?) Sandakan appear to be the only other bowlers classified as  Chinaman bowlers:

Finally we look at the best innings figures for Indian slow left-arm bowlers on debut:

And Dilip Doshi was an orthodox left-arm spinner. (He is also supposed to be the only Jain to have played Tests for India).

So it appears that Kuldeep Yadav’s innings bowling figures on debut may be among the best for those classified as Chinaman bowlers. Let us see how his match figures turn out.

In the last post https://abn397.wordpress.com/2016/01/02/most-runs-in-tests-in-first-calendar-year/ we saw that only three Test players have scored over 1000 runs in the calendar year of their debut (which is not the same as the first 365 days after debut).

To achieve this is primarily a matter of luck, as it is useful to make your debut in the earlier part of the year. However, some of them started off in the English season or as late as September when their country had a large number of Tests in the latter part of the year (such as India in 1979).

As you may guess, this table is derived from getting a list of wicket-takers in a calendar year from Statsguru and then checking the date of their Test debuts. It is just possible that I may have missed someone.

Note that both Clark and Panesar achieved this in 2006. In the same year AN Cook became the second to make over 1000 runs in his first calendar year.