Continuing our study on the famous trains numbered 1 and 2 on the Indian Railways in the past.

In 1976, the newcomer  was the 1/2 Golconda Express between Guntur and Secunderabad. This appears to have started running in the late 1960s, probably soon after the new South Central zone came into existence. It still runs on the same route with slightly slower timings, and is ranked as superfast. The only difference you will see is that it now has two rakes instead of one.

The story of the 1/2 Gujarat Mail is different in that it has been around for a long time, but like the Golconda Express it runs on the same route and similar timings. In the 1970s it was said to be having more first class coaches than any other Indian train. (At that time there were only two pairs of Rajdhanis and no Shatabdis). It has the classic late night-early morning pattern of the old Mails. Over the years its timings have improved only marginally. 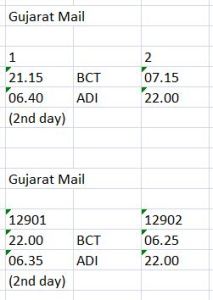 The 1/2 Delhi/Ahmedabad Mail even lost its number one status on the Northern railway between Rewari and Delhi, where it became 201/202 (presumably to distinguish it from the 1/2 Kalka Mail on broad gauge)

It has a sad story. It remained a Mail until renamed the Yoga Express a few months ago, and never got superfast status. It was earlier considered the best train on the MG route between Ahmedabad and Delhi, but got competition from the Ashram Express since the 70s. Once this route was converted to BG in the 90s, it was extended to Haridwar thus becoming the Ahmedabad-Haridwar Mail and finally the Yoga Express of today. In the mean time a Rajdhani as well as the Ashram Express became more popular on the Ahmedabad-Delhi route. Anyway, gauge conversion has reduced its running time between Ahmedabad and Delhi from 22 hours to 19 hours. It now takes a small detour to stop at Gandhinagar in Gujarat. In case you were wondering, this was before Narendra Modi became Prime Minister. But the change to Yoga Express did occur during his tenure.

Finally there is the fastest (?) narrow gauge train which used to run between Gondia and Jabalpur which had its number 1/2 though the SER had the 1/2 Calcutta Mail on the broad gauge as well. It was sometimes listed as the Satpura Express. Today conversion has taken away the first quarter of the route and it runs between Balaghat and Jabalpur. This is likely to be converted to broad gauge by 2016, although the 10001/10002 Express still runs as of date. 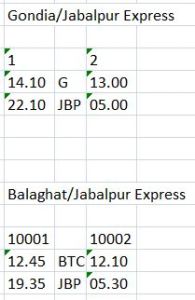 Thus ends our sample study of the trains numbered 1 and 2 in 1976 and how they were faring in 2014. Sometime later I plan to go back further to compare the 1/2 of the 1930s with their counterparts of today. This would add a few more such as the Darjeeling Mail, once the pride of the Eastern Bengal Railway.