Biggar is a small town with a population of a little over 2000. It lies in the Canadian province of Saskatchewan, and is one of the few small towns in Western Canada which still have a passenger train service (only thrice a week in both directions, but you can still board the train directly to Vancouver or Toronto).

The citizens of every small town want their place to be famous. This they achieved with this slogan:

As Wikipedia says: “The town is known for its slogan “New York is big, but this is Biggar.” It was created in 1914 by a survey crew who painted it onto a town sign as a drunken prank. According to The Biggar Museum and Gallery, the graffiti remained unchanged until 1954 when the slogan was officially adopted.”

It is indeed a heritage station, but is so dilapidated that passengers have to wait elsewhere. This is what the train operator Via Rail has to say about it:

This implies it is an unstaffed station where you can check in your baggage only if you go to the baggage car yourself. And the trains stop only on request-perhaps you have to flag them down yourself.

Armchair travellers can see below the schedules for the “Canadian”, probably the longest passenger train journey in North America. Its only real rival from the US was the Sunset Limited which ran for a few years between Los Angeles and Miami. However, Hurricane Katrina saw it restored to its original eastern terminus at New Orleans. Amtrak presently considers the route east of New Orleans to be suspended indefinitely. 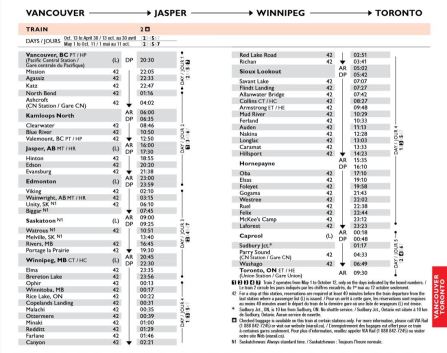 So much for the place which is Biggar than New York. There are other odd places to visit including Jhumritilaiya and Timbuctoo in the days to come.