Bangladesh’s first Test victory against Australia came in their fifth attempt, having lost all four of the previous Tests. Two were in Australia and two were at home.

The main architect of this victory was Shakib Al Hasan with a fine all-round performance, which we will look at in more detail:

While the feat of a century + fiver is well documented, the “converse” of a fifty and ten wickets is not. But it can easily be got from Statsguru.

Fifty and ten wickets in a Test:

Only 28 such instances in all Tests. The only ones who have done this on more than one occasion are Sir Richard Hadlee (3 times) and now Shakib Al Hasan (twice). Kapil and India’s false knight also make appearances (while R. Ashwin does not). Moeen Ali was the last entry before Shakib.

Kapil and Jadeja are the only ones from India.

If you take the still rarer feat of a fifty and two five-fors:

Only 14 instances-including two by Sir Richard and two by Shakib. None from India.

While we are at it, let us take the analogous case of two fifties and one five-for:

Only 14 instances, including four from India. Mankad, Umrigar and Surti could not save their team from defeat, while B. Kumar’s neglected batting helped in a draw.

No one has achieved this more than once.

There have, however been four instances of 100 runs and 10 wickets in a match-in which Shakib figures again: 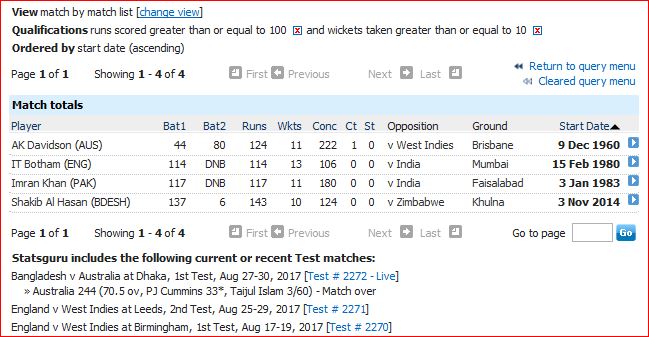 You would have heard of the honours boards at Lord’s. A summary can be seen here.

The “neutral” boards are dealt with at more length here  towards the end of the post.

Basically these boards list all instances of i) centuries ii) five wickets in an innings and iii) ten wickets in a match at this ground. Here we look at instances of all-round performances.

Only two have scored a century and taken a five-for in the same Tests. They are among the all-time greats:

Then there are others who have scored centuries and taken five-fors at Lord’s, but not necessarily in the same Test. The full list (which includes the pair listed above) is:

If you remove Mankad and Botham, you still have Allen, Miller, Illingworth, Flintoff and Broad who have scored centuries as well as five-fors at Lord’s. None have scored more than one century at this venue, though there are some instances of multiple five-fors.

Incidentally Allen and Broad scored their only Test centuries at Lord’s.

Let us now look at all-round performances at Lord’s which go beyond the honours boards.

A fifty and ten wickets in the match:

Only one instance. If we “stretch” this to 50 or more runs and ten or more wickets, we get:

And finally, 100 or more runs and five or more wickets in the match:

Additions to the original pair of Mankad and Botham (1978) are Morkel, Kapil, Botham (1984) and Mark Butcher. The earlier Morkel does not seem to be related to Albie and Morne. The instance of Botham in 1984 was the time when West Indies made 344/1 to win the match. And Butcher was an occasional bowler who took only 15 wickets in his Test career.