Mayank Agarwal became the 4th Indian Test player whose maiden Test century was a double. Shikhar Dhawan’s 187 is the highest by an Indian on debut, followed by RG Sharma’s 177.

More on this topic:

Note the tragic case of Karun Nair. Perhaps he will soon get a chance to redress matters.

Also see this link for all Test players whose maiden century was 200 or more:

There seems to be a lot of interest in this older post about Karun Nair:

Particularly as he has now made a couple of good scores in domestic matches.

So we update an older post about those who scored Test centuries and no fifties.

One century and no fifties, arranged in order of highest score: 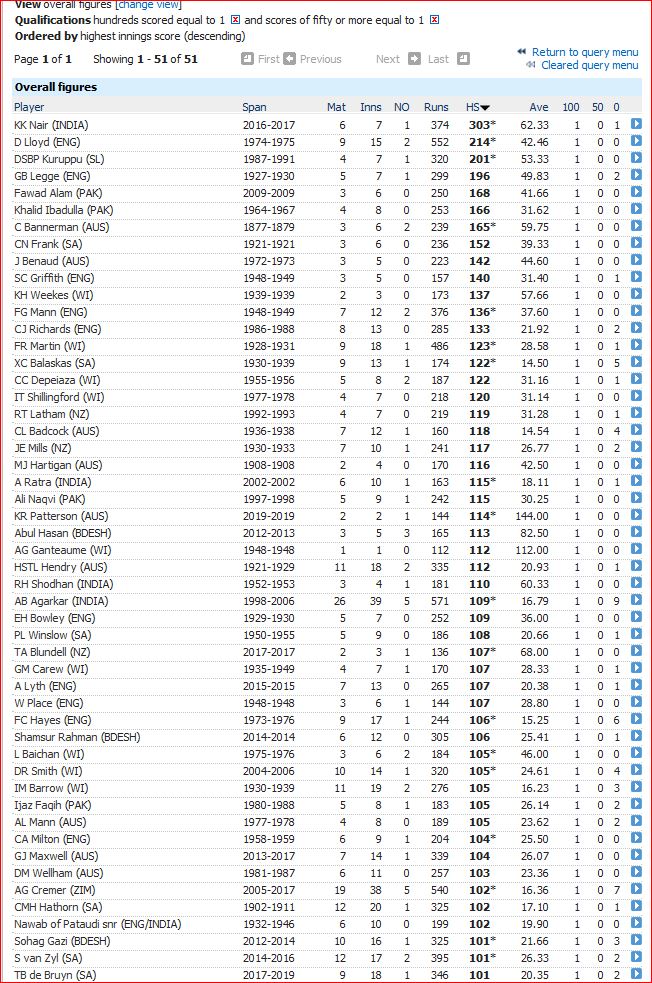 Karun Nair tops this list, being the only one with a triple century and no fifty.

Then we have David Lloyd and Brendon Kuruppu. Lloyd’s double came in his second Test (against India’s ill-fated team of 1974), while Kuruppu scored his double on Test debut.

We then have a long list going down to TB de Bruyn, who is probably going to play again. Others who may play again would be Nair, KR Patterson, TA Blundell, GJ Maxwell and AG Cremer.

If you were thinking of RE Redmond, he scored a century and a fifty in his only Test.

Now for those who scored two centuries and no fifties:

Graham scored a century on debut. And W Wasti scored both his centuries in the same Test.

And only one has scored three centuries and no fifties:

While Bopara continued to play limited-overs matches for England, he did not get a chance to score a fifty after his three centuries.

For a short time KL Rahul shared this record, as he scored three centuries before making his first fifty.

First we summarize all Tests between these teams: 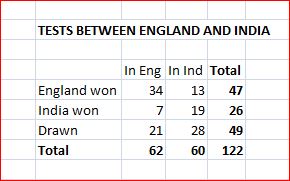 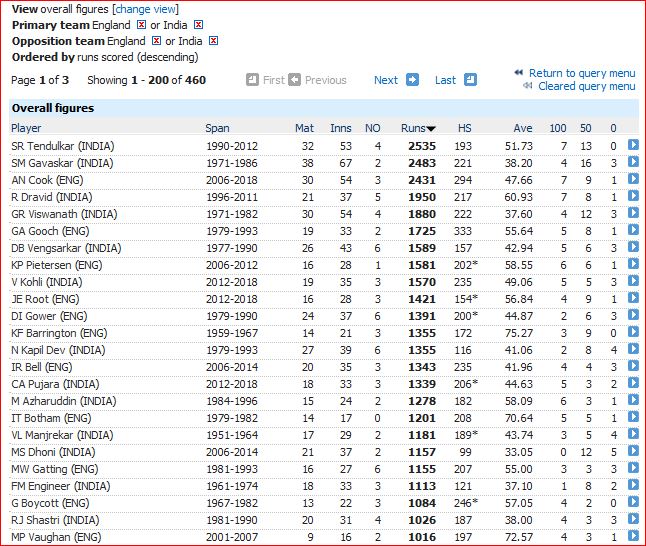 AN Cook finished with the highest total for England against India. Kohli, Root and Pujara are next among current players. 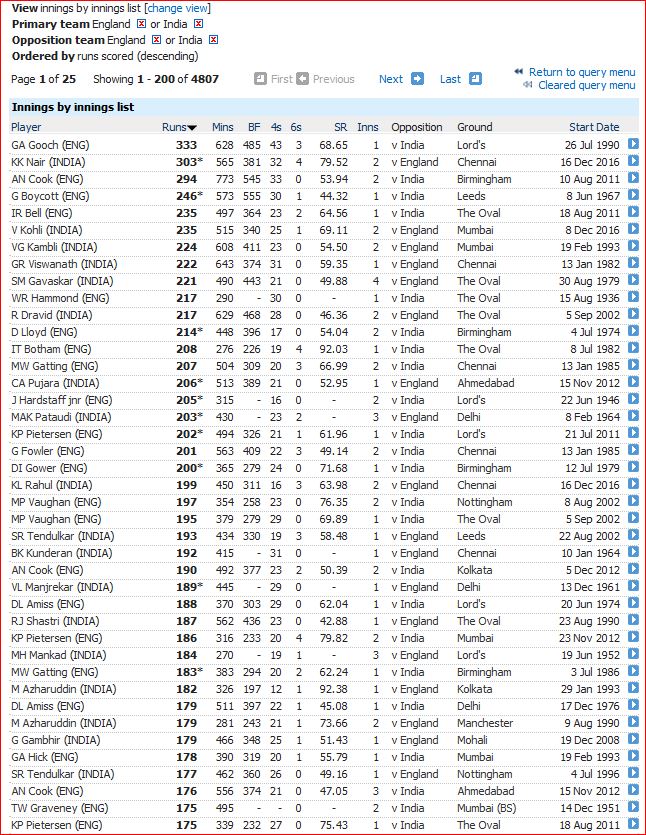 No entry from the current series, as the highest was 149 by Kohli and then Rahul. KK Nair’s 303* was made in the previous series.

Botham does not appear here as he batted for less than 20 innings.

Anderson with 24 wickets in this series moved into top place, overtaking Kumble and Chandrasekhar. Other current players here include Broad, Ashwin and I Sharma.

The most 5-fors are 8 by Chandrasekhar and 6 by Botham. Bedser is the only one with two 10-fors.

Best innings bowling (including all instances of 7wi): 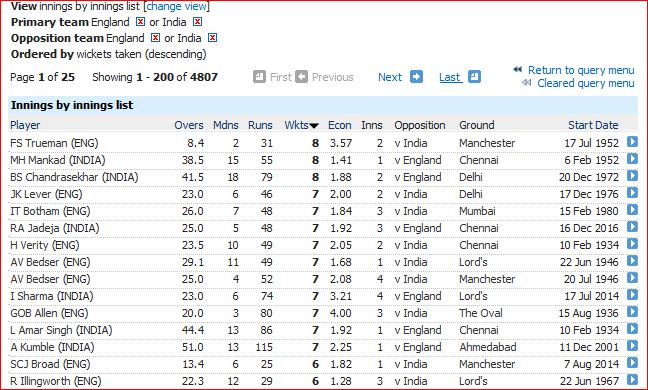 No instances from this series, though there is 7-48 by Jadeja in the last series.

Best match bowling (including all instances of 10wm): 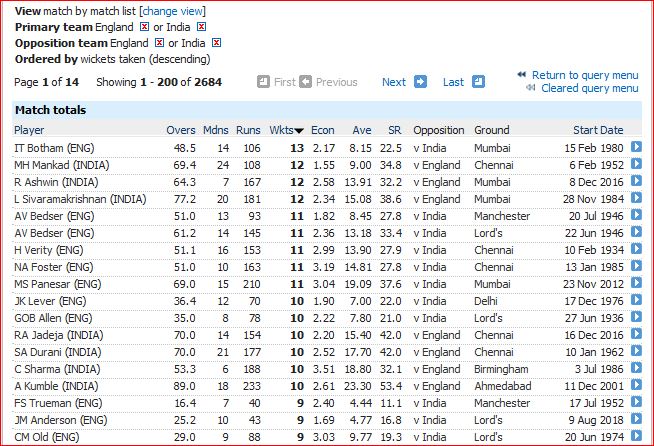 The best from the current series is near the bottom, namely Anderson’s 9-43. Ashwin and Jadeja have done better in the last series.

You will remember the fuss about Karun Nair when he scored his triple century in his third Test at Chennai. We now look at his oddly skewed Test career after he has completed 6 Tests. This should be apparent from this sequence of scores:

It is hoped that he will play at least a few more Tests and score more centuries. Until then, he holds a couple of records in all Tests. This does NOT include the highest maiden century, as Gary Sobers (365*) and Bob Simpson (311) are ahead.

Highest score by someone who scored only one century ( 150 and above):

KK Nair heads this list, ahead of England’s RE Foster who held the record for about 113 years. His 287 (on debut) was the world Test record until early 1930 when Andy Sandham made 325 (in his last Test), though Bradman crossed it with 334 later the same year.

Foster, Kuruppu, Fawad Alam, K Ibadulla, C Bannerman and A Jackson  were making their Test debuts. Gillespie made his only century in his last Test while batting as nightwatchman. There are several other current players here led by MT Renshaw with 184.

Another quirky record is the highest Test score made by someone who never made a fifty (i.e. a score between 50 and 99). This gets a bit messy due to Statsguru’s limitations, but we get these figures:

Highest score by those who scored one century and no fifty (110 and above):

Highest score by those who scored two centuries and no fifties (all cases):

Highest score by those who scored three centuries and no fifties (all cases):

No one has scored more than three centuries without a fifty. For a short time KL Rahul shared the record with Bopara. But Rahul scored his first fifty soon after he scored his third century.

KK Nair is also the only current player with one or more centuries and no fifties.

These tables cover all Test matches in the calendar year 2016.

As many as 7 with over 1000 runs (including 4 from England). Root just edged out Bairstow.

4 centuries each by V Kohli, S Smith and MM Ali.

Highest innings scores (140 and above):

Headed by a newcomer KK Nair and a relative veteran in Azhar Ali. This was Nair’s maiden Test century. V Kohli had three scores of 200 and above. BA Stokes’s 258 was the highest by any No 6 batsman in Tests, surpassing KD Walters’s 250 in 1976-77.

It was clear that deciding the Man of the Match for this Test would be somewhat difficult. Finally the Crown Prince won at the expense of the Knight. We look at their records in this Test.

Highest innings by Asian batsmen against England (200 and more): 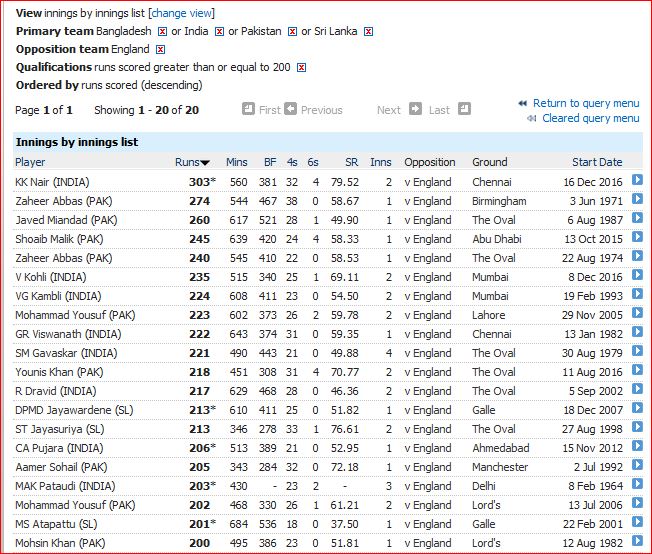 Nair also became the third to make a triple century as his maiden century.

These are the highest maiden centuries (250 and above):

A dynamic link for all such scores of 200 and above:

More detailed accounts of the innings of Sobers and Simpson can be seen here:

We now move on to Ravindra Jadeja’s all-round feat.

Here we have a complete list of those who scored a fifty and took 10 wickets in a Test: 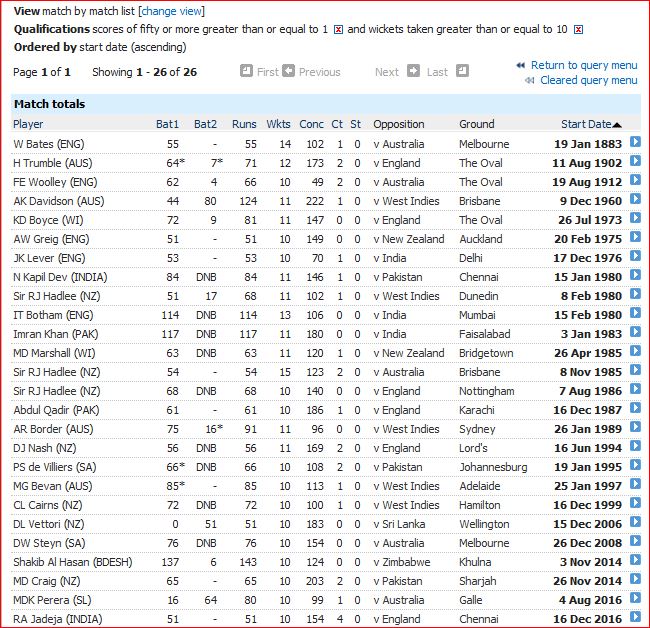 The other main all-round feat is a century and five wickets in an innings, which is slightly more common. It has been achieved on 32 occasions by 25 players, including Mankad, Umrigar and Ashwin (twice).

Now for a few other contrived all-round records. Jadeja took 10 wickets in the match and 4 catches (of which one was a c & b). He is one of only 5 to achieve this:

And he is also part of a small group of 15 players who had an innings tally of 10 or more wickets and catches put together. 5 players have 11.

They are GA Lohmann, JM Noreiga, HJ Tayfield, AE Trott and LC Braund. 10 others including Jadeja have 10.

In Jadeja’s case, the one c & b meant he had a hand in 9 of the 10 wickets which fell. Only Dawson (b Mishra) evaded him.

Tail piece: While Karun Nair is nominally from Kerala, he was born in Jodhpur and has lived mainly in Bangalore.

Last time we looked at those Test players who never saw victories in their careers-a long list of over 150 players including some fairly prominent names. Now we look at those who never saw defeat. Here too the topper is a relatively unknown player.

There are no less than 68 players with 5 or more Tests who never saw defeat.

Those who played in 7 or more Tests are listed below: 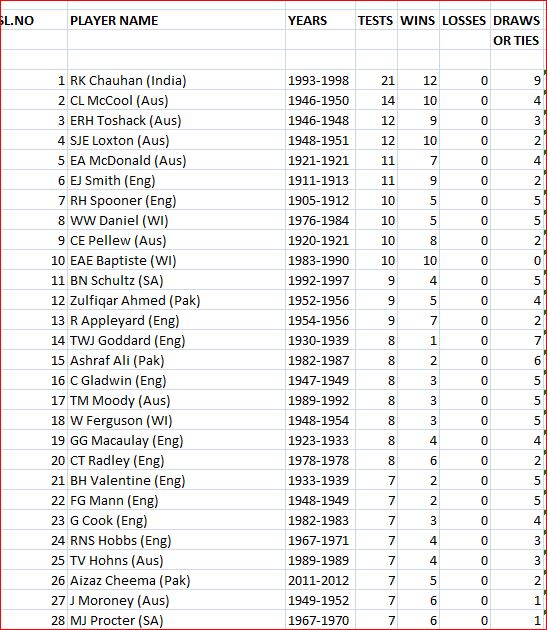 The list is headed by an Indian RK Chauhan, who, like Eldine Baptiste, acquired this distinction mainly by being in the right place at the right time, when he was the third spinner after Kumble and Raju at a time when the fading Kapil and upcoming Srinath opened the bowling. Cricinfo did not even bother with a picture of him:

He was probably lucky to play 21 Tests with limited batting and a best of 4-48 with no other four-for.

Another article with a picture:

He is said to have recovered now.

Much the same could be said about the next few on the list, notably McCool, Toshack and Loxton who were fringe players of Bradman’s Invincibles of 1948. They had their moments, like when Toshack took 5 wickets for 2 runs against India in 1947-48.

EA McDonald opened the bowling for Australia with Jack Gregory in the early 1920s and created havoc against England, although he ended with only 11 Tests. He may have been the first prominent Test player to be killed in a road accident, which was some years later in 1937: http://www.espncricinfo.com/australia/content/player/6555.html

Eldine Baptiste naturally finds his place here, having never seen either defeat or a draw.

There are no current players visible above. For those with 5 or more Tests, there is only KK Nair (6 Tests with 5 victories and a draw) and he has not played in India’s past few Tests.

Of course, the all-draw men CV Gadkari and Shafiq Ahmed who saw only draws in their 6 Tests are also there.