Here we review the good performances by those who made their Test debut in 2017. 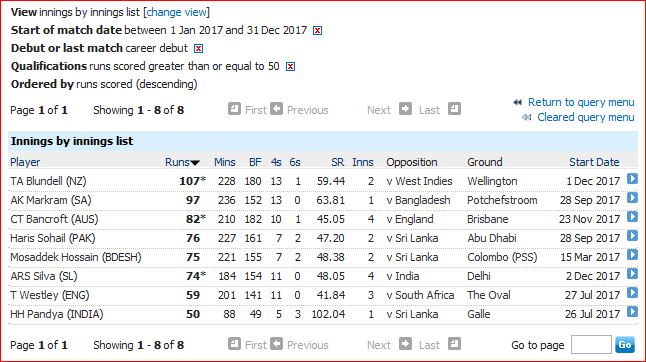 A century and a near century. While Blundell has played only one Test after his debut, Markram continued to score well in his subsequent matches. As of Jan 31, 2018 he has a Test average of 52.00 with 2 centuries and 2 fifties. Pandya has not been so consistent, though he has an average of 33.00 with a century and 2 fifties. The others have not done much until now, though we may soon hear more about them.

We also look at debutants who scored:

Apart from Blundell, Markram and Sohail also scored over 100 runs in their debut match.

Roland-Jones has by far the best figures here, while Olivier is second.

Fielding: 2 or more dismissals in an innings:

Markram has the most catches (3) while two others have 2. Nurul Hasan is the only keeper here.

3 or more dismissals in a match:

Markram and Nurul Hasan again. As of today Markram has 6 catches besides 520 runs in 6 Tests.

Roland-Jones again with Overton. Roland-Jones has 82 runs and 17 wickets in 4 Tests. Overton was unfortunate to make his debut against Australia in Australia.

Markram’s performance is the best here followed by that of Mosaddek.

gives a comprehensive history of all those who have bowled in the Chinaman style (left-hand wrist-spinner) at some point in their Test careers. I am going a little further in studying the performances of those who exclusively bowled in this style (even if they were not regular bowlers). A number of famous names including the alleged inventor Ellis Achong, Johnny Wardle, Gary Sobers and Bernard Julien bowled in various other styles.

So here are the “exclusively Chinaman” bowlers and their careers in brief. This is in chronological order:

Even the change bowlers have taken fivers and tenners.

The best innings bowling in this category is 7-75 by Lindsay Kline:

There is also Michael Bevan’s tenner along with 85*, which makes him among the relatively few to score a fifty and take 10-wickets in a match:

A few years before that Allan Border also scored 75 and took 11 wickets with his little-used left-arm spin against the West Indies:

The full list of those who scored 50 and took 10 wickets in a match:

Sir Richard Hadlee is the only one to do this more than once, while “Sir” Ravindra Jadeja also makes an appearance.

It is interesting to see that these occasional bowlers achieved a ten-wicket haul which well-known bowlers such as Willis, Brett Lee, Kallis, Thomson and Sobers were not able to manage during their long careers:

Coming back to the Chinamen bowlers, here are the best innings and match bowling figures on debut:

The trio of PADLR Sandakan, LO Fleetwood Smith and Kuldeep Yadav have the best performances in innings as well as match bowling. Here is Sandakan’s debut:

We now look forward to competition between Sandakan and Yadav for being the best current Chinamen bowlers.

Footnote: Michael Bevan, who seems to have had some Indian ancestry, was soon dropped from the Test team as his batting was not good enough. He then became one of the mainstays of Australia’s ODI middle-order.

Kuldeep Yadav, classified as a slow left-arm Chinaman bowler, took 4-68 in his first Test innings. Let us see where this performance stands.

If you are not clear as to what type of bowling this is:

There are a few others such as Roy Fredericks who rarely bowled-but he did take a few Test wickets including AD Gaekwad of India.

However, Statsguru’s database does not list Chinaman as a class of bowlers. We can only segregate left-arm spinners.

The following tables have data up to the evening of 25 March 2017.

Here Kuldeep Yadav is 15th on the list of those who took 4 or more wickets in an innings on debut. Hirwani’s twin 8-wicket hauls head the list. There does not seem to be any known Chinaman bowler here. In fact, there is only one other slow left-arm spinner here. Back to this later.

Here Kuldeep Yadav is 22nd of the 29 who took at least 4 wickets in an innings.Note Abdur Rehman’s 4-105 in both innings which is the best case of the same bowling analysis in both innings on debut. And R Berry took 5wi and 4wi in the first of his two Tests; perhaps he was overshadowed by fellow debutants Ramadhin and Valentine.

LO Fleetwood-Smith and the current Sri Lankan player PADLR (Paddler?) Sandakan appear to be the only other bowlers classified as  Chinaman bowlers:

Finally we look at the best innings figures for Indian slow left-arm bowlers on debut:

And Dilip Doshi was an orthodox left-arm spinner. (He is also supposed to be the only Jain to have played Tests for India).

So it appears that Kuldeep Yadav’s innings bowling figures on debut may be among the best for those classified as Chinaman bowlers. Let us see how his match figures turn out.