The honors board at Lord’s are well known-anyone who scores a century or takes a fiver or a tenner gets his name on them, even if it is a neutral Test not involving England. If you need to brush up, see

and for Indian players featured there, full details are here:

However, note this extract from the Wikipedia article:

“A number of very distinguished players such as Sachin Tendulkar, Ricky Ponting, Shane Warne, Curtly Ambrose and Brian Lara are not named on the honours boards.”

It may be recalled that there was much heartbreak when Sachin failed to score a century in 2011, which was generally understood then to be his last Test there.

We now look at the aspect of prominent players failing to reach a board-worthy performance at Lord’s despite several opportunities. And there are some visitors who simply did not get to play enough at Lord’s.

Many English players whose career lasted about 5 years would have played 10+ Tests at Lord’s. Visiting players with long careers usually manage 4 Tests, unless they miss one Test or series. So we begin by identifying those who batted in  at least 8 innings there. A further stipulation is that their batting position is 1 to 8, to eliminate tailenders without much batting ability.

So we have this for Most matches at Lord’s without a century: 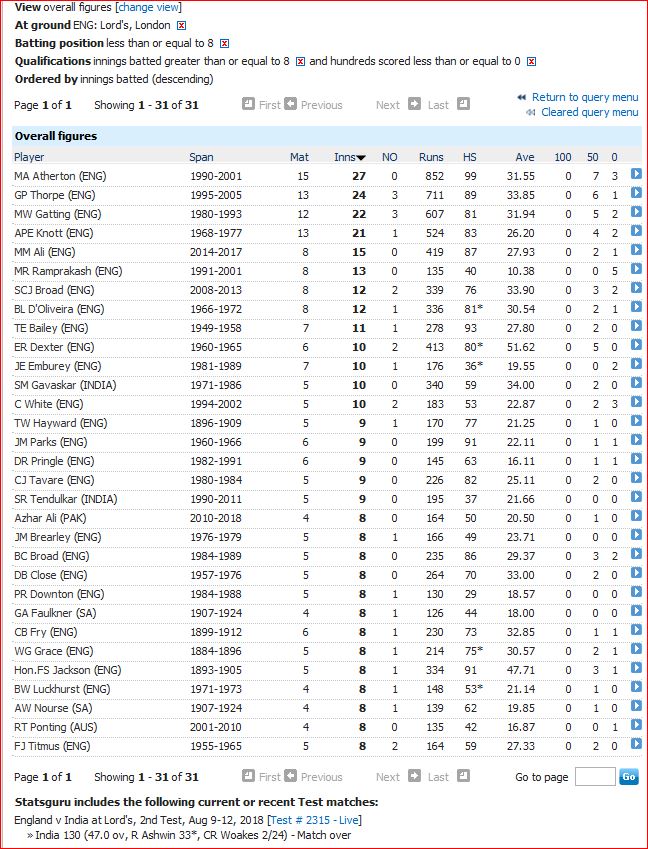 Atherton, Thorpe and Gatting played the most innings there without a century-particularly odd as Gatting played for Middlesex. Atherton did score 99 there and has the most fifties (7).

Visitors are led by Gavaskar and Tendulkar, followed by Azhar Ali,  Faulkner, AW Nourse and Ponting. Lara played in only 3 Tests and 6 innings. The highest averages here are by Dexter (51.62) and FS Jackson (47.71).

While most of the batsmen here scored at least one fifty, some did not. They include Ramprakash (HS 40 in 13 innings), bowling all-rounder Emburey, Brearley, wicketkeeper Downton, Tendulkar, Faulkner and Ponting. The lowest average here is 10.38 by Ramprakash who was a specialist batsman, unlike some of the others. Then comes all-rounder Pringle (16.11) and another famous batsman Ponting (16.87). Tendulkar at least got into the 20s.

Apart from Atherton’s 99, there are 90s by TE Bailey, JM Parks and FS Jackson.

Next, we take up bowlers who bowled at least 1000 balls (while bowling at no 1 to 5) and never took a five-for: 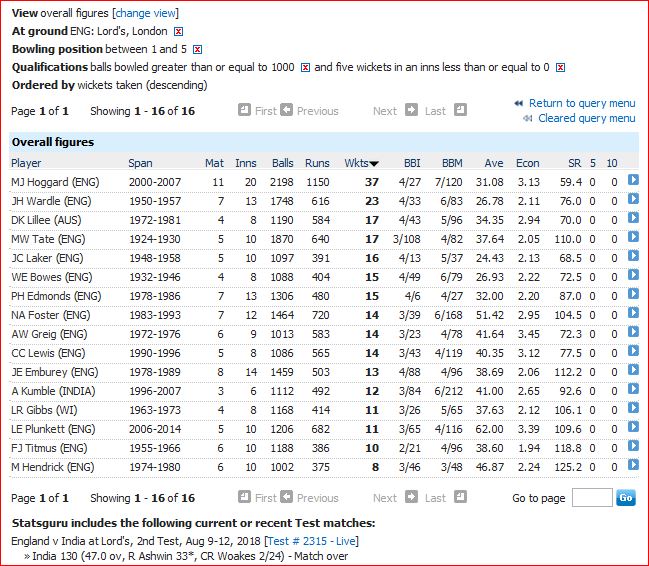 Ambrose and Warne did not bowl enough balls here.

And one gets similar results if we look for those who made the same effort and never took a ten-for: 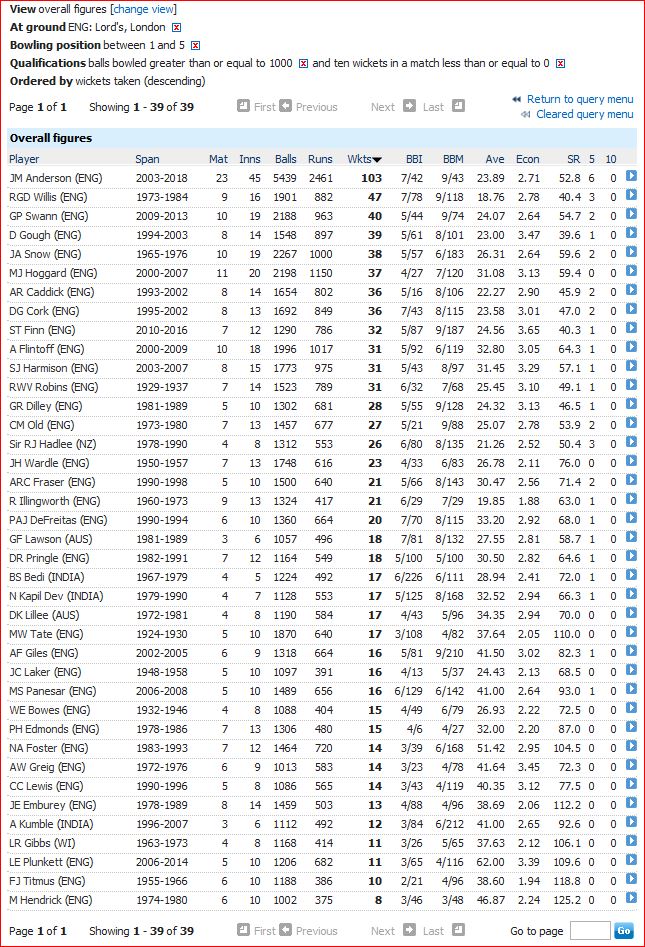 Here, Anderson has the most wickets (103) with a best of 9-43. He may, of course, play a few more Tests at Lord’s. He also has the most 5-fors (6). Oddly enough Anderson has almost twice the wickets of the next bowler Willis with 47. The best bowling average is by Willis with 18.76 followed by Illingworth with 19.85.

Sir Richard Hadlee has the most wickets by a visitor (26).