The topic of honors boards at Lord’s for Tests has been covered in this blog several times.

Having covered the centuries, we continue with the 5-fors in ODIs at Lord’s: 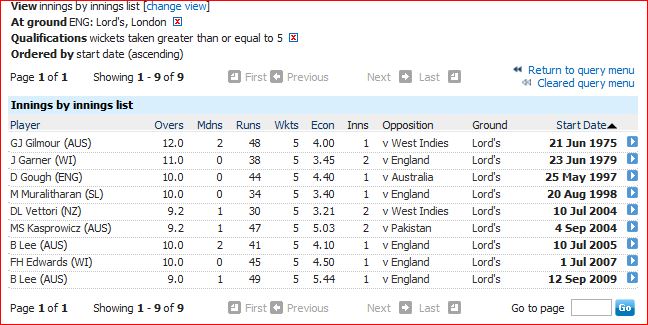 Only 9 such instances, compared to the 30 centuries.

No one has taken more than 5 wickets in an innings. And no one has taken a 5-for more than once. Unlike in the case of centuries, we cannot find anyone here who failed to take a 5-for in Tests at Lord’s.

Only one entry here.

Now for the “Visitors” board:

Somewhat longer. The best by India is 3-26 by A Nehra and 3-28 by Harbhajan Singh in the same match against England on 5 Sep 2004 (in which Harmison also had the best figures against India).

And the “Neutral” board:

In this category India has only played one match, the World Cup final in 1983. India’s best performances were 3-12 by M Amarnath and 3-31 by S Madan Lal. The best against India was 3-32 by AME Roberts.