Today we hear a lot about this nondescript town in Tamil Nadu: 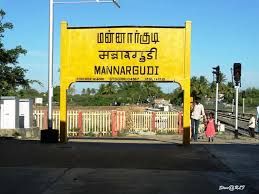 It is not even in the top 20 cities of Tamil Nadu when ranked by population. However, the term “Mannargudi Mafia” has come to mean a group of people connected with the CM-aspirant Ms VK Sasikala. Google for “Mannargudi Mafia” if you are not familiar with this aspect of TN politics. For instance, see: http://economictimes.indiatimes.com/slideshows/nation-world/all-you-wanted-to-know-about-sasikala-and-mannargudi-mafia/what-is-mannargudi-mafia-/slideshow/57021899.cms

Even Wikipedia cannot find anything out of the ordinary here except for the presence of some moderately important temples: https://en.wikipedia.org/wiki/Mannargudi

Ms Sasikala was not born here, but at a more tongue-twisting place called:

Mercifully we can use the station code TTP here. It is maybe a little bit larger than Mannargudi. While Mannargudi has enjoyed a railway revival of a sort in the last few years, TTP has not seen trains running for the last few years due to gauge conversion. It also used to have a branch line running to the quaintly named Point Calimere (later Kodikkarai) but that line may or may not be reopened.

Of course, the phrase Mannargudi Mafia sounds catchy, just like the Maharashtra Mafia and Malayali Mafia we may have heard about elsewhere. How about a Mathura Mafia or a Moradabad Mafia? In other countries there may be a Manchester Mafia or Marseilles Mafia or a Massachusetts Mafia, but probably not one from Maine as it is not important enough in US politics.

We now move back to the strange history of the railways in and around Mannargudi and its feeder junction Nidamangalam:

(Note the new trend of mentioning the PIN code on station signboards).

In the early 1860s, the predecessors of the South Indian Railway built a broad gauge line all the way from Erode to Trichnopoly, Tanjore and Negapatnam (those being the spellings used at the time). A wayside station now called Sikkal was then listed as Sickle.

By the mid-1870s, the South Indian Railway Company (with HQ at what is now Tiruchchirapalli) had decided that MG would be used through most of its territory. By the end of the 1870s the above mentioned line from Erode to Negapatnam was converted to MG. An MG extension to Nagore was opened in 1899, and a branch from Nidamangalam to Mannargudi still later in 1915.

Erode to TPJ was converted back to BG in 1929. The rest of the route to Nagore became BG only in around 2000. Extensions were made to Velankanni in the south and to Karaikal in the north.

However, the branch from Nidamangalam to Mannargudi had a few trains running on the 14-km route. There were two intermediate stations -Rajapayyam Chavadi and Haridranadhi (which have now vanished from the railway map, apart from the Great Indian Railway Atlas). I remember seeing this route in timetables of the 1960s and early 1970s. But it is absent from the 1975 timetable. This 1975 timetable does have the Mayuram-Tranquebar and Peralam-Karaikal lines which were closed soon afterwards. The Mannargudi branch was also thought to have gone the way of the dodo until a few years ago.

Though not considered to be from the Mannargudi Mafia, the DMK leader TR Baalu set his sights on improving things in the region around Thanjavur. His somewhat complicated political career can be seen at more length here:

Essentially he served as a minister in both NDA and UPA governments up to 2009. Although he was not in the railway ministry, he appears to have been instrumental in getting the branch to Mannargudi reopened in BG in the mid-2000s. It now has a variety of express trains to different parts of Tamil Nadu and even to faraway Bhagat-ki-Kothi near Jodhpur, better known for its large diesel shed and for being the terminus of the Thar Link Express to Munabao.

Here you can see the station’s list of trains:

The 4 daily trains include a DEMU passenger to Tiruchi, another passenger to Mayiladuturai and expresses to Chennai Egmore and Coimbatore. Then there are a tri-weekly express to Tirupati and a weekly express to Bhagat-ki-Kothi. Not bad for a place which used to have only shuttles to Nidamangalam.

Presumably the local population is happy with its new-found connectivity to different corners of the country.

In contrast, the broad gauge line from Salem to Mettur Dam had no passenger services for several years (although goods services continued). These passenger services were also revived in recent years but the route still has rather limited services: