Rail fans have many interests, and in recent years a wide variety of information sources have appeared on the internet. On the Indian railways, you can probably get pictures of virtually every variant of locomotive which has existed over the past few decades. And Google will probably find station signs for every station of importance (as well as many which are not of importance).

I will come to odd Indian station signs (such as those with 4 or 5 languages), with rare examples of Maithili signs, Bengali signs far from Bengal, and so on. For the moment we look at station signs outside South Asia with Indian languages.

This would be the most famous: 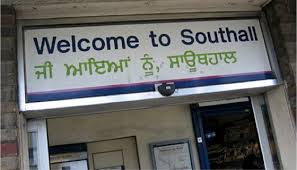 It is possibly the only multilingual station sign in England (though Scotland and Wales do have Gaelic and Welsh respectively on their signs).

For more on Southall station see this

And now to Singapore with its four official languages: English, Mandarin, Bahasa Malaysia and Tamil. Most official signs (including the metro signs) are in all 4, though place names in English and Malay are often the same. I was not able to get a picture of a station sign with all 4 languages on one board, but here are a few examples: 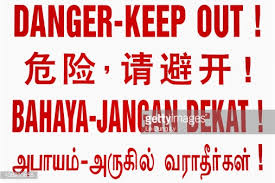 In the upper one other languages have been added. Can someone clarify what they are? Burmese and Sinhala perhaps?

From the Dubai metro:

Though one would think that signs in Malayalam and Urdu would be understood by more people in Dubai.

Apart from the four official languages of Singapore, a line in Bengali has been added presumably for the benefit of workers from Bangladesh.

Next we will explore some oddities from India.