Summing up of my last few blogposts on this topic:

WINNING ALL TESTS IN CAREER of 5 or more Tests

LOSING ALL TESTS IN CAREER of 5 or more Tests

Indian: RK Chauhan as above

Current: None of 40 or above

Indian: Kapil Dev as above

DRAWING ALL TESTS IN CAREER of 5 or more Tests

Indian: CV Gadkari as above

Current: AK Markram as above

Using the same methods, we now look at those who saw the most and least losses in Tests.

It is easy enough to see who have seen the most losses. That is given in the next table. Naturally, this depends on how many Tests the player got to play in.

Chanderpaul (77) and Lara (62) have the first two places, symbolising the decline of West Indies cricket which started in their times.

The best by a current player is JM Anderson in 3rd place with 61, followed by his partner SCJ Broad in 8th place with 50.

The best by an Indian player is 56 by SR Tendulkar  in 4th place.

But it is more interesting to see those who did the best on a percentage basis, as we will see below.

These are those who have seen losses in all of their Tests.

A total of 16 players saw losses in all their Tests (among those who played 5 or more Tests). They are listed below:

Not surprisingly, the first 6 places are from Bangladeshi players. The unlikely leader is Alok Kapali, an all-rounder who has other claims to fame such as being the first Bangladeshi (and first Hindu) to take a Test hat-trick. In second place is Mohammad Sharif, also from Bangladesh. He was a medium-pace bowler.

There is no contemporary player or Indian player here

Now we look at a list of 22 players who saw losses in 90% or more of their Tests.

However, there is still no contemporary player (unless you count SW Ambris who played his last Test in 2018). However, there are players from teams other than Bangladesh here, starting with J Middleton of South Africa (6 out of 6 losses).

And what about those who saw the least losses ?

A total of 69 players did not see any loss in their careers of 5 Tests or more.

Here we list those who played 7 or more Tests without seeing a loss:

This time it is headed by a relatively lesser-known Indian player Rajesh Chauhan. Like Eldine Baptiste and his comrades, he was fortunate to be in a lesser role (as 3rd spinner) in a fairly strong team. The next three (McCool, Loxton and Toshack) can best be described as fringe players in Australia’s invincibles of 1948. Ernie Toshack at least has the most economical 5-for (5 wickets for 2 runs) in all Tests. That was against India; he had 11-31 in the match.

The most recent player here is Aizaz Cheema of Pakistan, who played his last Test in 2012.

Next we will look at those who saw the most and least draws.

The ongoing Test between Zimbabwe and Bangladesh could be considered as a contest for No 9 in the Test rankings, but has had moments of statistical interest. First there was a 191-run stand for the 9th wicket which is the second highest in all Tests. Now there was another weird score by Zimbabwe’s debutant opener Takudzwanashe Kaitano  . We may need to remember his first name in the years to come.

What are the slowest scoring rates for innings over 100 balls?

Kaitano’s 6.86 is the third slowest here, with only JT Murray and today’s N Wagner ahead of him. India’s Yashpal Sharma did a little better with a scoring rate of 8.28.

Let us also look at the real batting marathons for innings over 500 balls:

These are all the scores above 500 balls where the number of balls were recorded. They were not recorded in some triple centuries such as Sobers’s 365*, Hanif’s 337 and Hammond’s 336*. It would be particularly interesting to see Hanif’s scoring rate.

Chanderpaul, Hammond and the lesser known Radley have the first three places here. Pujara has the slowest for India.

Finally, we look at the slowest scoring rates for careers exceeding 1000 balls faced. Again, full data is missing for many of them.

NS Yadav has the lowest (estimated) rate for India. His batting did help in saving at least a couple of Tests.

Jardine has the slowest scoring rate for frontline batsmen, unless you want to include TE Bailey in this category.

Hope that you have seen Part 1.

To be continued, where the batting averages across positions are found. While Bradman is first at 99.94, the next few are not obvious.

In the excitement over the West Indies finally winning a Test against a “respected” opponent, an unique record was overlooked. KC Brathwaite became the only opener to remain unbeaten in both innings of a Test.

You would expect that this would have happened before, but it hasn’t.

The nearest equivalent I could think of was Desmond Haynes who opened and was last out in both innings in this test-though he had the mortifying experience of seeing his side lose the Test (and series) by one wicket: http://www.espncricinfo.com/ci/engine/match/63259.html

Other points of interest: Kraigg is one of the few who have scored over 200 runs in a Test in two unbeaten innings: 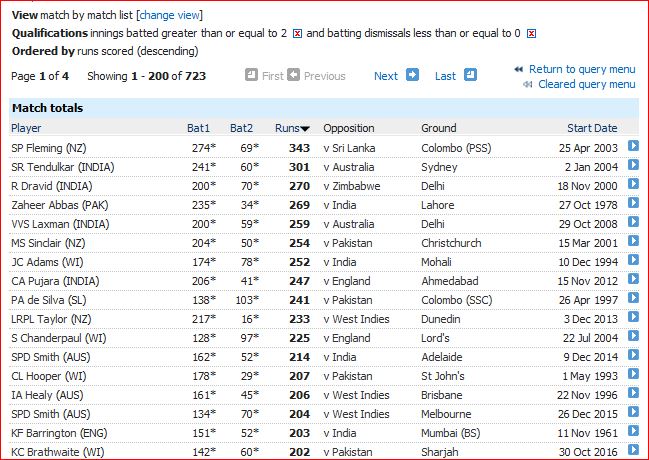 He is also one of 28 to have scored unbeaten 50-plus scores in each innings-which Chanderpaul was fond of doing. GC Grant and Azhar Mahmood achieved this on debut. Aravinda de Silva remains the only one to make two unbeaten centuries in a Test. Other surprising entries in this list include Wriddhiman Saha: 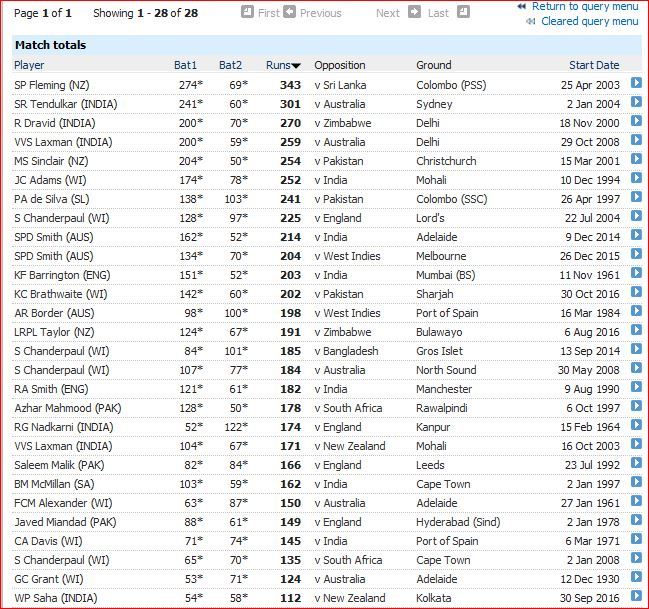 Probably Kraigg deserves a little calypso in his honour.

(Thanks to Abhishek Risbud for suggesting this potential record).