Sri Lanka won the series 1-0 with 1 draw. Zimbabwe put on a somewhat stronger challenge than expected, almost drawing  the first Test and putting Sri Lanka under some pressure in the second.

Summary of matches between these teams:

Zimbabwe is yet to win a Test in this series. They have lost all 8 Tests which they played in Sri Lanka.

Karunaratne and CR Ervine have the most runs among current players. 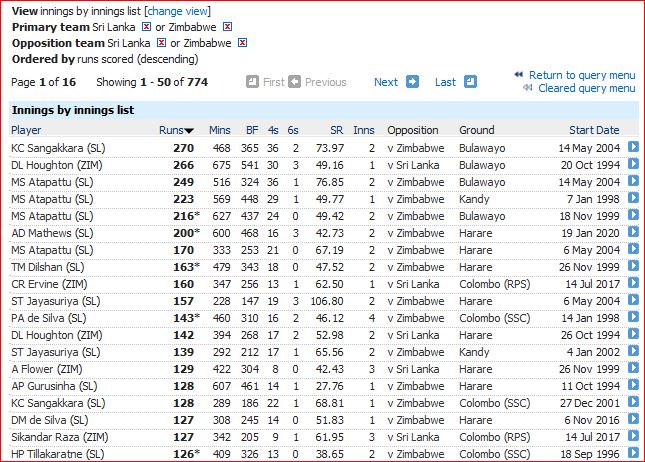 Note Atapattu’s 3 double centuries. The highest score in this series was 200* by AD Mathews. No one else crossed 125.

Jayasuriya predictably leads here, while Atapattu also has a strike rate considerably higher than that of the others. 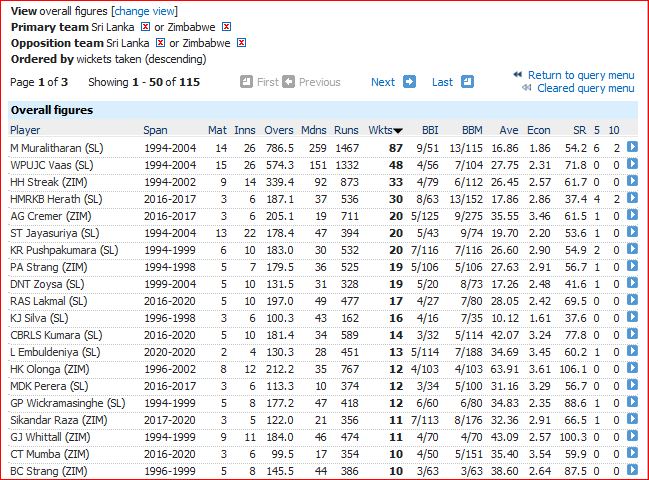 Muralitharan and Vaas have done much better than others. Murali and Herath both have 2 ten-fors, while Murali also has the most five-fors (6).

Lakmal and Kumara have the most wickets among current players.

Best innings bowling (includes all instances of 5wi and above): 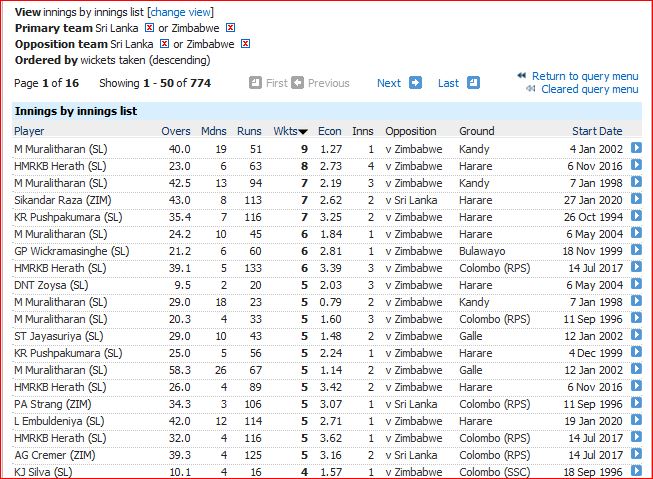 Embuldeniya is the only other bowler with a five-for in the current series.

Best match bowling (includes all instances of 8wm and above):

Muralitharan expectedly heads this list as well. Herath did not bowl enough.

RG Sharma made the 54th score of 200 and above in a Test for India. These include 3 of 300+ and 51 from 200-299. Kohli has the most such scores (7), although Sehwag has the highest scores both inside and outside India. Outside Asia, we go quite far down until we reach Tendulkar’s 241* at Sydney. 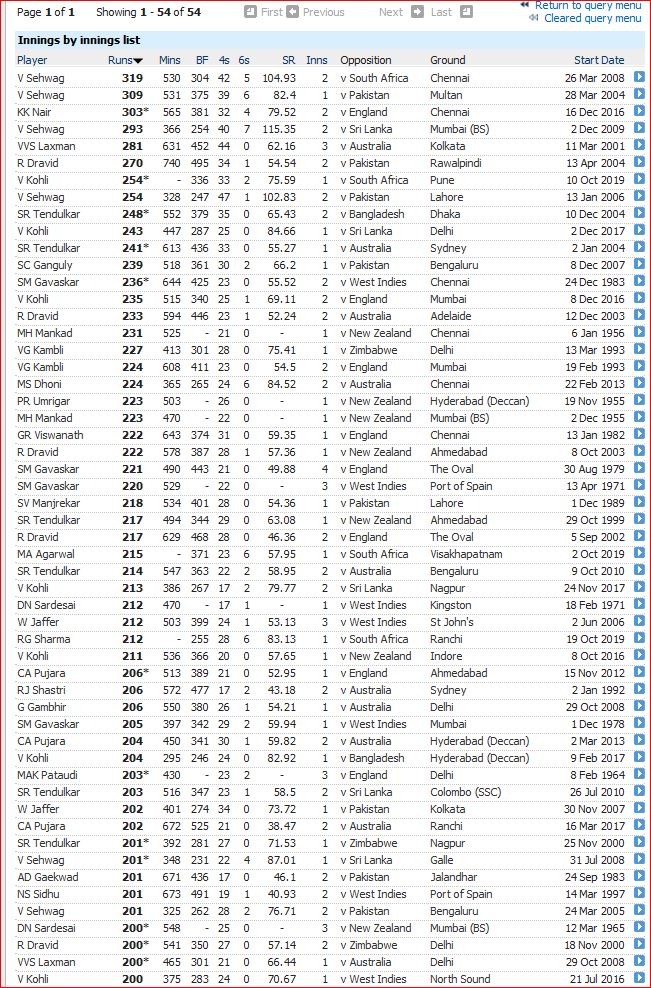 Now we see who did the same against India:

McCullum and Ponting have each done this 3 times against India.

The highest score here is Jayasuriya’s 340, the highest outside Asia is Gooch’s 333 and the highest in India is M Jayawardene’s 275.

We close by looking at statistics for World Cup matches alone, since a fair number of high scoring rates mentioned earlier were in relatively less important or highly one-sided matches. Perhaps this would give a better idea of performance in more important matches. Perhaps the Champions Trophy matches could also be added.

We start with the highest averages in World Cup matches (minimum 20 innings): 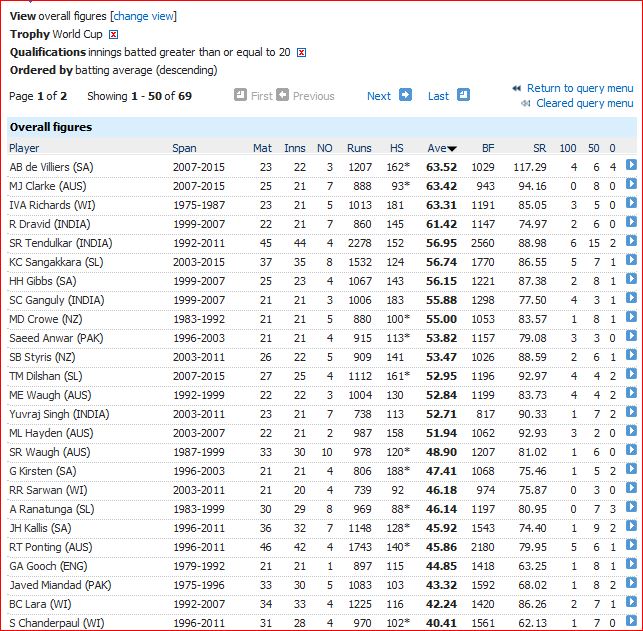 de Villiers heads this list although MJ Clarke and IVA Richards are just behind.

Now we look as 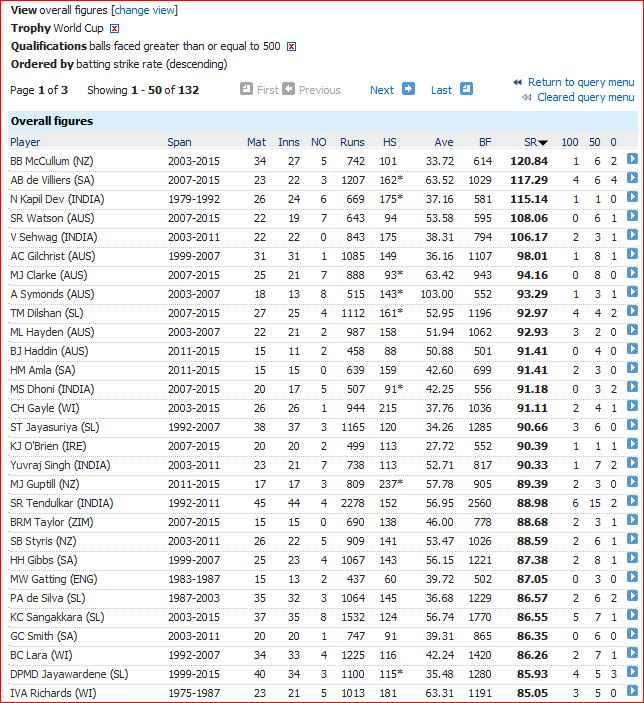 Here we have McCullum followed by de Villiers and Kapil.

Then there are links in Cricinfo’s records section for Fastest centuries in ODIs: 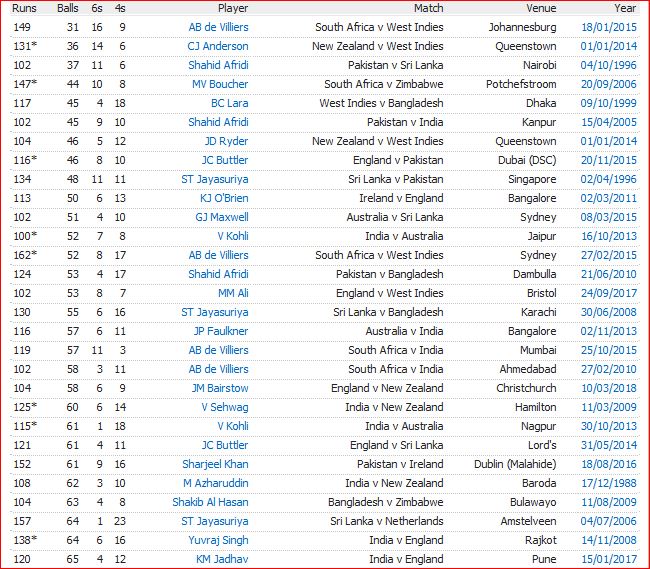 Similarly there is a link for the fastest 50. Like in the table above, it refers to the first 50 runs in the innings although the number of balls for the second or later 50 runs may be quite different.

The record had been stuck at Jayasuriya’s 17 balls since 1996. de Villiers lowered it to 16 balls after almost 19 years. After that Kusal Perera and Guptill also equalled the old 17-ball record.