It seems unlikely that there will be any bilateral series between India and Pakistan for quite some time. It has already been decided that India will not play Pakistan in the group stages of the World Test Championship.

So this seems to be a good time to look back at the records of ODIs between India and Pakistan (not just in the World Cup).

Headed by the older players who had more opportunities to play these matches. Among current players there is Shoaib Malik (1782) and MS Dhoni (1231).

The most centuries are 5 by Tendulkar, followed by 4 by several others.

The most 50+ scores are also led by Tendulkar with 21. Next is 16 by Inzamam and Dravid. 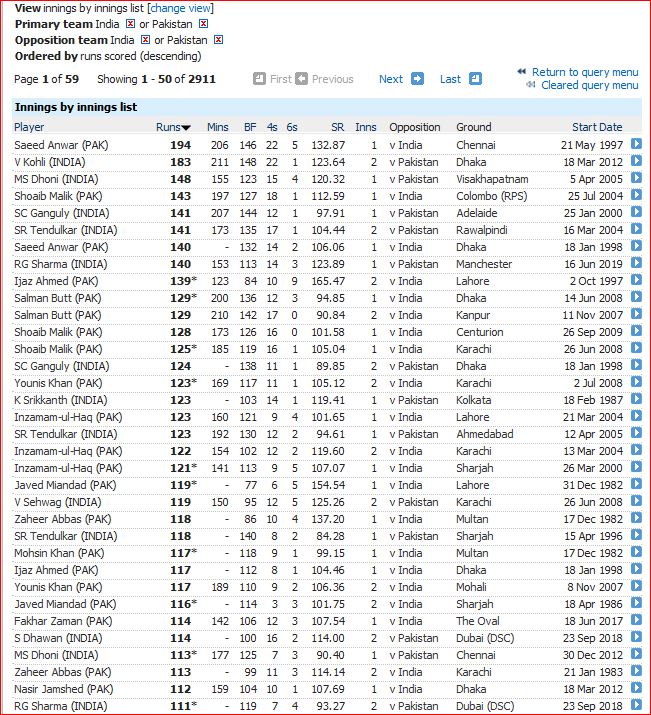 Saeed Anwar’s 194 was a record in all ODIs for several years. The highest score in recent years is RG Sharma’s 140 in the current World Cup.

A number of current players such as Kohli are not here as they have not played 20 innings. Dhoni and Shoaib Malik have the highest averages among current players. 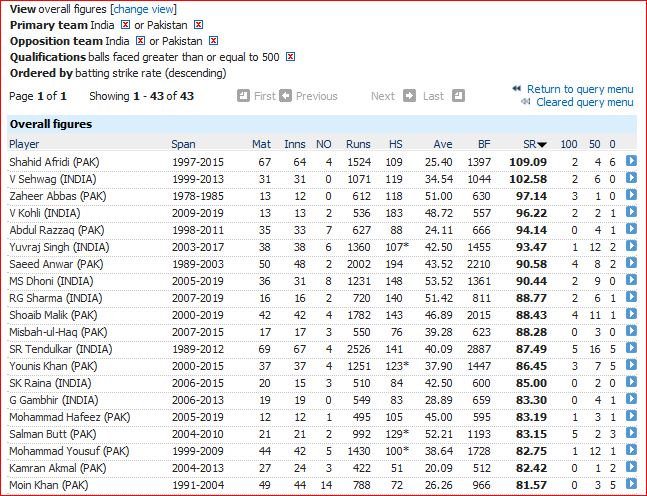 Shahid Afridi and Sehwag lead as one would expect. Kohli, Dhoni  and RG Sharma have the highest strike rates among current players.

The city of Sheikhupura in Pakistan was in the news recently:

There is a happy ending as he was promptly deported to India a few days later.

Sheikhupura is on the route from the Atari/Wagah border to Nankana Saheb, where special trains from India run occasionally for the benefit of Sikh pilgrims. The main stations on the way are Lahore and Qila Sheikhupura:

There is a video on Youtube produced by a passenger on of the pilgrim trains, showing it passing through these stations:

Nankana Saheb is not really a major railway station. Timetables of the 1930s and 1940s show it as a wayside station served by two pairs of passenger trains between Lahore and Shorkot Road (now Shorkot Cantt). In recent years an express has started running on this route which stops at Nankana Saheb and several other stations.

Those who follow cricket closely would remember that Sheikhupura had staged two Test matches and two ODIs in the 1990s. The first Test was against Zimbabwe in 1996, where Wasim Akram’s record of 12 6s in his 257 not out is still a world record for an innings. In fact, it was a match record until RG Sharma hit 13 sixes in a match in 2019.

With Saqlain Mushtaq (79) he put on 313 for the 8th wicket which was the new Test record.

This record was surpassed by Trott (184) and Broad (169)’s partnership of 332 against Pakistan at Lord’s in 2010. Given the later disclosures of various tricks being played by Salman Butt and his friends, it is quite likely that they were “allowed” to run up large scores.

In that match in 1996 Paul Strang scored a century and took a five-for. He remains the only one from Zimbabwe to achieve this in a Test.

In 1997 this venue hosted another Test against South Africa. Nothing much happened as 3 days were washed out.

While Test matches did not return here, the people of Sheikhupura were more fortunate than their neighbors in Gujranwala. The one Test there (against Sri Lanka) in 1991 saw only one day of play before the weather played spoilsport. There are several other venues in India and Pakistan which have hosted only one Test so far.

Sheikhupura also features in jokes where it is supposed to be the home of Sheikh Pir, who wrote the plays attributed to Shakespeare. Tamilians disagree as they say the plays were written by their scholar Seshappa Iyer.

There is a lesser-known Sheikhpura in Bihar state in India, on the Gaya-Kiul route:

While Bangladesh has made good progress in limited-over cricket in recent years, the just-concluded Test at Mirpur is historic. To understand this clearly, we look at the the team’s 8 Test victories:

This is their first victory against a full-strength “regular” team, not a fellow minnow such as Zimbabwe-even if it was a 3-0 sweep as in 2014.

And we don’t count the two wins against a West Indies third XI which included many debutants who (apart from Kemar Roach) vanished without a trace. The stand-in captain Floyd Reifer witnessed clean-sweep losses in the Test as well as the ODI series. In the course of the series he talked about his team improving. A journalist asked him, “Have you been smoking something that sounds like your name?”

(Those familiar with American crime novels would know that “reefer” is one of the numerous synonyms for marijuana).

It should be remembered that Bangladesh came very close to winning their first Test back in 2003, but were thwarted by the last-wicket pair of Inzamam (138*) and debutant Yasir Ali (1*): http://www.espncricinfo.com/ci/engine/match/64045.html

Yasir Ali never played a Test again, but much was heard of another debutant Salman Butt in years to come.