The last Test in Pakistan was scheduled to be played from March 1 to 5, 2009.

There was no play after the second day. A contemporary report:

And the scorecard, for what it is worth:

Since then, Pakistan has played Tests only away or at neutral venues (mainly in UAE, also 2 in England). There have been a small number of T20Is and ODIs played in Pakistan in the past few years:

ODIs in Pakistan since March 2009:

It is also apparent that any Pakistani player who made his Test debut since 3 March 2009 would never have played at home until now. They are: 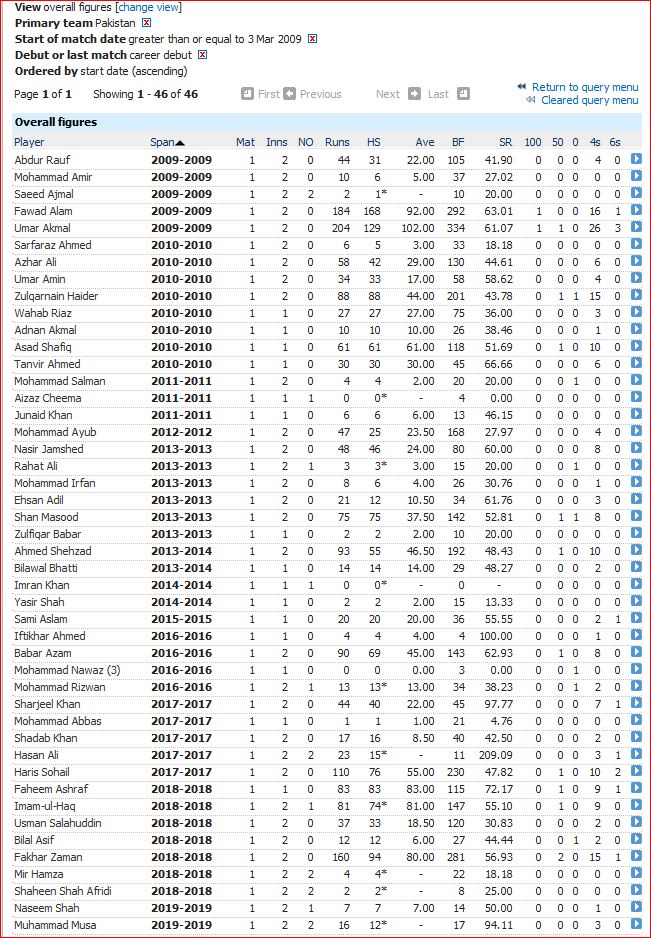 It can be seen that these 46 players include the present captain (Azhar Ali) and the previous captain (Sarfaraz Ahmed) who made their debuts in 2010, besides key players such as Asad Shafiq and Shan Masood. There is also Fawad Alam who made his debut in Sri Lanka in 2009 but has not played any Test since that series, but may well play in the forthcoming series.

And there are others such as Saeed Ajmal and Mohammad Amir who came and went without ever playing in a home Test.

You can see a review of past Tests between Pakistan and Sri Lanka here:

Note that their last meeting was in the UAE in late 2017, when Sri Lanka won 2-0. They were among the very few teams to beat Pakistan in a series in the UAE.

Keshav Maharaj’s 9-129 and match figures of 12-283 (along with Theunis de Bruyn’s maiden century) were South Africa’s only saving grace in their loss in the second Test at Colombo (SSC). We now look at the best bowling figures by losing teams in Tests.

Best innings bowling in defeats (including all instances of 8wi and above):

Maharaj’s 9-129 is the fourth-best performance here in a list headed by Kapil Dev’s 9-69. It may be recalled that Noreiga’s 9-95 is the best for WI in all Tests, and that it came in India’s first Test win over the West Indies.

The previous best for South Africa was Hugh Tayfield’s 7-23 in 1950, which can also be seen above.

Valentine and Krejza were making their debuts. Krezja played only in one more Test. Valentine made his debut with Ramadhin, and the two ensured that England lost the remaining 3 Tests of the series.

Best match bowling in defeats (including all instances of 11wm and above):

Krejza, Hall, Burke and Valentine were making their debuts. Only Valentine got an extended run.

A total of 20 Tests have been played between these countries: 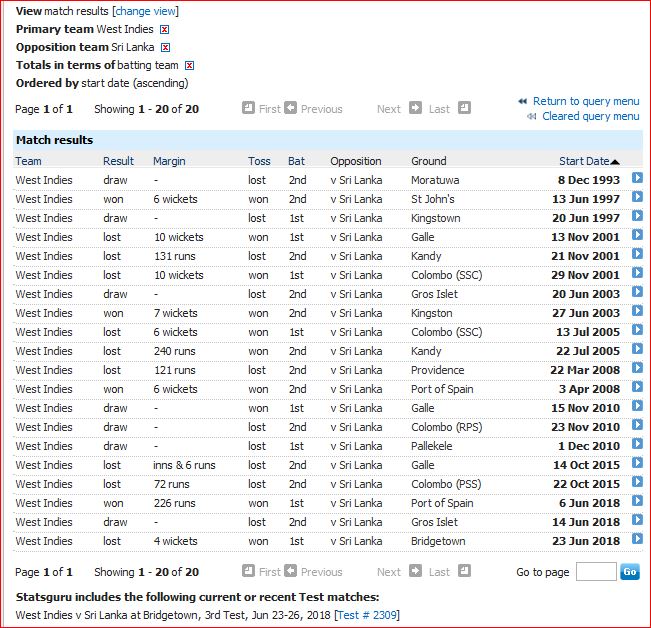 Muralitharan and Vaas are far ahead of the others.

Best innings bowling (6wi and above):

Best match bowling (8wm and above):

Gabriel and Holder both surpassed the previous WI v SL record of 9-85 by Collymore in 2003. 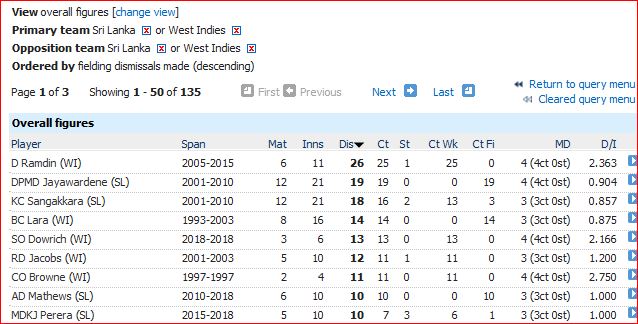 Best innings dismissals (4 and above):

Best match dismissals (5 and above):

Dowrich has done well in this series, as has Kusal Mendis.

Interesting that it is headed by a non-keeper.

Holder’s performance in the 3rd Test was the best.

Continuing our review of all Tests between these teams until now. 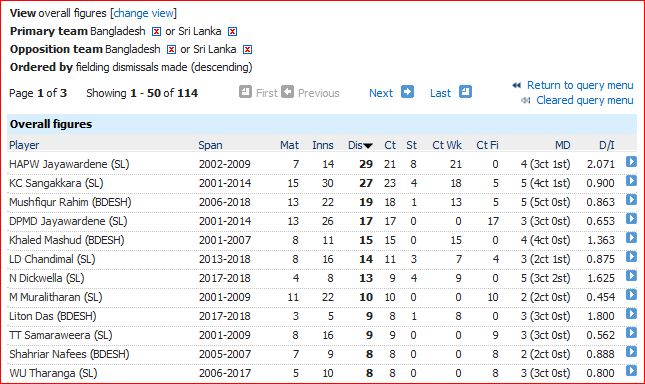 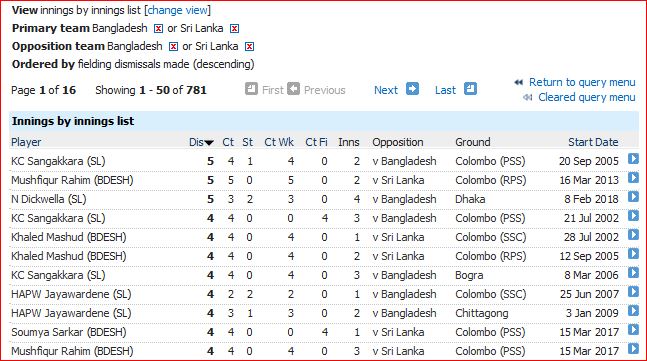 Dickwella equalled the record of 5 during this series. Sangakkara and Soumya have 4 catches as fielders.

P Jayawardene has the record of 7, while M Jayawardene and Soumya have 5 catches as  fielders. Dickwella has the best figures from the current series.

Sangakkara has the highest here, as P Jayawardene did not play enough matches here. Mushfiqur has done almost as well as Sangakkara. Among non-keepers the highest rate is inevitably by M Jayawardene.

Shakib is the only all-rounder with respectable figures. Vaas did not play enough in these matches.

The one-man army Shakib Al Hasan again. His absence in this series must have hurt Bangladesh a lot.

With the premature conclusion of the 2nd Test at Mirpur (Dhaka), Sri Lanka won the 2-Test series 1-0. The last series between these teams was less than a year ago when Bangladesh drew 1-1 in Sri Lanka.

20 Tests have been played between these teams. Sri Lanka leads 16-1 with 3 draws.

In Bangladesh, Sri Lanka has played 8 Tests and lead 6-0 with 2 draws.

Sangakkara scored 319 and 105 in the same Test, becoming only the second (after Gooch) to score a triple century and century in the same Test. In this series we also saw Mominul Haque scoring 176 and 105, becoming the first from Bangladesh to score centuries in both innings of a Test. His 176 was the highest by Bangladesh against Sri Lanka at home, surpassing the 136 by Ashraful in 2006. However Mushfiqur’s 200 at Galle in 2013 remains the highest for Bangladesh against Sri Lanka.

Sangakkara has an average more than double that of runner-up Ashraful. 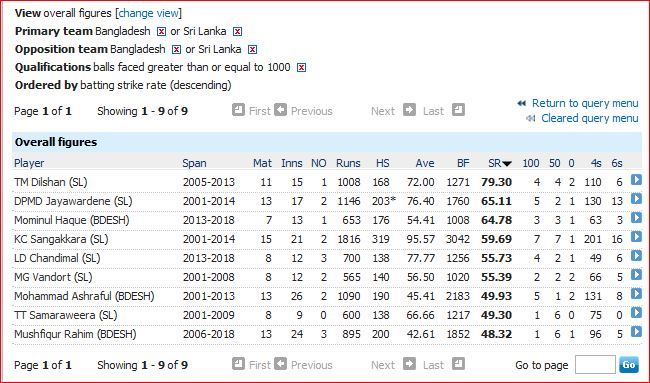 However, Dilshan and M Jayawardene have the highest strike rates, with Dilshan having a much higher figure than the runner-up. 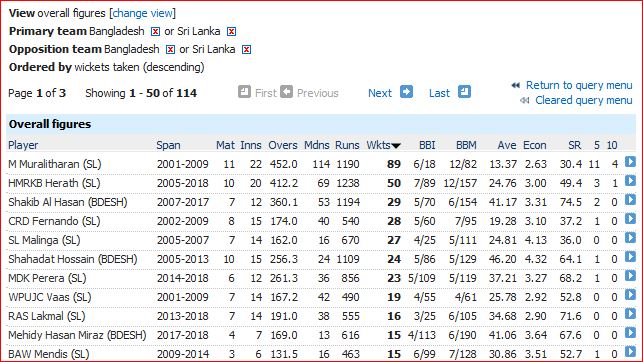 Muralitharan leads followed by Herath and then Shakib, with the first two far ahead of the rest. MDK (Dilruwan) Perera and a few other current players also figure on this list.

Best innings bowling ( 5wi and above):

Note Muralitharan’s dominance here. From the current series we only have Dananjaya who was making his debut.

Best match figures (7wm and above):

Muralitharan has the best bowling average, economy rate and strike rate. Herath and Shakib follow at a distance.

Here is a short summary of Sri Lanka’s cricket performance in India:

ODIs: 48. India lead 34-11, 3 with no result. Sri Lanka has never won a bilateral series in India-though they did beat India twice during the 1996 World Cup on their way to the trophy.

T20Is: 5. India lead 3-2, and won the only bilateral series between the teams.

The triple clean sweep in all 3 formats of cricket has been recorded once before, when Pakistan visited Australia in 2009-10. Australia won the Tests 3-0, the ODIs 5-0 and the single T20I (admittedly by only 2 runs). You can see the details here:

The second Test was won by the comparatively narrow margin of 36 runs.

Then came the ODIs:

The first 4 ODIs were rather one-sided although Australia won the 5th one by 2 wickets.

Australia won this by just 2 runs, making it a 9-0 sweep. Remember that this was in their home country.

Nothing like this was achieved until India visited Sri Lanka in 2017:

ODIs 5-0, all by handsome margins except one win by 3 wickets:

And the T20I by a good margin:

Thus India emulated Australia’s 9-0 triple clean sweep, with somewhat bigger margins of victory. But unlike Australia, they achieved this away from home.

Salute Virat Kohli and his men.

Kohli captained all 9 matches, but faced a bewildering array of captains:

In contrast, the Australian captain Ponting faced M. Yousuf in the three Tests and 4 of the 5 ODIs, when Afridi came in for the last one. In the T20I it was Clarke vs Shoaib Malik.

Earlier, India won a T20I series 3-0 in Australia in early 2016 which was believed to be the only clean sweep by a visiting team in Australia in any format of cricket in a series of at least 3 matches:

The West Indies players Gabriel and Chase should have remembered that no less than 22 Tests ended as a draw when the last wicket pair held on:

In some cases there were only a handful of runs to make for victory. The India-WI match of 2011 ended up as a draw with scores level (not a tie because all wickets had not fallen). England in 1963 also came close to victory with 5 runs to get. But in most cases a heavy defeat was averted because the last wicket did not fall.

They included some draws which critically influenced the result of a series. Take the last entry

where the No 10 and 11 batsmen Eranga and Nuwan Pradeep survived for a draw.

In the 2nd and final Test of that series, No 11 James Anderson got out with one ball left. Thus Sri Lanka won the Test and the series.

There are quite a few other cases where these 10th-wicket stands were critical. Like the one between Dhoni and Sreesanth in 2007, where India went on to win the series 1-0.

Interestingly the first such Test drawn by the last wicket pair was by India in 1946, with the long-forgotten Sohoni and Hindlekar at the crease:

The above list is for the 4th innings where 9 wickets were down and the match ended with a draw. There have also been numerous cases where matches were drawn when 9 wickets in the third innings were down when the side was facing a possible defeat if the last wicket fell.

This cannot be directly be pulled out of Statsguru as in the above table. But all such 10th wicket survivor stories in the 3rd innings can be found below:

Ignore the declarations. Also, in many cases there would not have been enough time for the opponents to make a large number of runs. Maybe we can count cases where the potential target was less than 50 runs.

The narrowest escape would be this one of England vs SA in 1998, where England’s total in two innings exactly equaled SA’s total of 552. SA would have needed just 1 run to win, but England’s last pair of Croft and Fraser spent enough time to ensure that SA would not be able to bat even one ball:

England’s escape at Cardiff in 2009 is also there, when Australia needed 13 runs to win.

While we are on this topic, also see the list of one-wicket victories. There have been only 12 in all Test cricket:

Here is a list of lowest ODI scores (below 60): 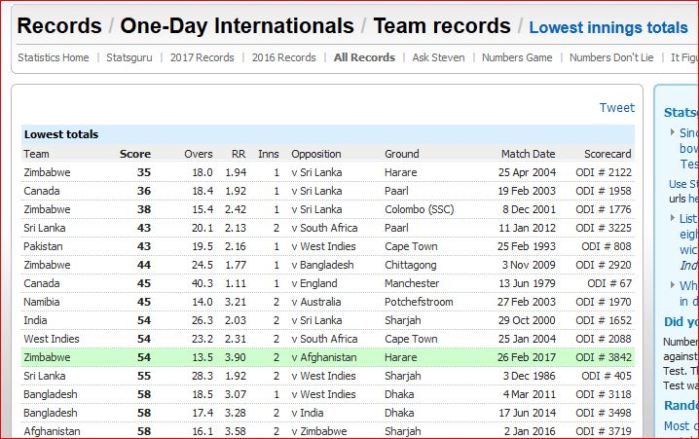 It can be seen that this is the lowest total against an Associate team.

Live link for ODI scores of 80 and below: http://stats.espncricinfo.com/ci/content/records/283987.html

Scorecard for the recent match, which came in a Duckworth-Lewis chase:

Note that Sri Lanka’s innings of 9.2 overs and 39 minutes are probably records for a winning side in an ODI.

Indian fans would remember their team’s 54 as well, which was probably India’s most humiliating ODI defeat:

Humiliating particularly because one player (Jayasuriya) scored over 3 times India’s total. It was the heaviest ODI defeat at that time, though it has since been surpassed several times. India has also inflicted similar defeats on Hong Kong and Bermuda. Afghanistan has also been on the receiving end (against Australia in 2015).

ODI victory margins of 225 runs and above:

Live link for all wins by 180 or more runs: http://stats.espncricinfo.com/ci/content/records/283902.html